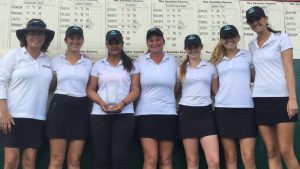 On Tuesday, March 28, the defending national champions of Rollins Women’s golf team traveled to Miami Lakes, FL to compete in the Barry Women’s Invitational. The Tars passed this ultimate seasonal test by winning the tournament by 10 strokes.

The Tars entered the final round of the tournament beating 10th-ranked Lynn by six strokes. In the end, they left the course with a score of 290, which was the top score of the day. In fact, Rollins’ seven-over 871 (292-289-290) is 29-shots better than their previous 54-hole season best at the Lady Moc Invitational hosted by Florida Southern.

Although top-ranked Barry University came second in the tournament with a 17-over par score of 881, Rollins’ came out on top and proved their dominance and eagerness for the postseason.

Seher Atwal ‘20 played an incredible tournament and ended up vaulting Rollins farther into first place. Her final round included just one bogey to go along with four birdies. She ended up tying for fourth overall, shooting a career best of 69 shots, ending with a score one-over at 217.

Paige Lyle ‘17 and  Selin Timur ‘20 ended up tying for sixth both with scores two-over at 218. They continued to match each other throughout the course and even maintained identical scores.

Rollins continues to progress through their season and show strength in their ability to defend last year’s national championship and return once again. Winning this tournament after coming in 2nd the week before at Augustana Spring Fling in California shows their focus and overall potential.

The team has two more regular-season matches before beginning postseason play with SSC Conference play. The team travels to Sarasota, FL to participate in the Harvard Invitational on April 1 and 2. Until then, keep up to date on Rollins sports at www.rollinssports.com.