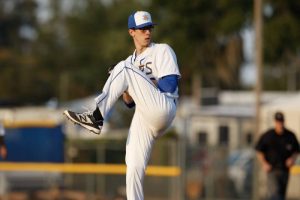 Right-hander Brad Case ’19 (#42) took the mound for the Tars, and when it looked like Young Harris may have been able to shove Case out of the game early, the Tars defensively and offensively backed Case up.

Young Harris College came out strong in the first inning; the centerfielder, Royce Woolfolk (#14) led the game off with a double over the head of the right fielder Nick Breen ’18 (#18). The shortstop Zach Odom (#2) advanced Woolfolk to third base with a groundball to the second baseman Grant Ashline ’18 (#8) for the first out. The number three-hole hitter Nick Sexton (#22) hits a slow roller to the third baseman Bj Minarcin ’20 (#24) driving in the first run of the game.

From there, the energy of the season opener seemed to have passed to Young Harris. That continued into the Tars’ first at bat when Michael Livingston (#20) struck out the lead off batter Brian Hooker ’18 (#23.) It was Ashline, Mike Purcell ’17 (#24,) and Chris Corbett ’17 (#10) that really got things going for the Tars.

Ashline drew a walk, and after Nick Breen struck out, Purcell came up with a single to center, advancing Ashline to second. Corbett came up with a clutch double down the third base line to drive in both Ashline and Purcell.

The tars held on to the lead for the rest of the game. Each team only scored one more run that night, so the Tars won their season opener 3-2.

Case and Corbett were a couple of the key players in the game. Case was able to work through a few tough innings of Young Harris squaring him up. He was able to make it through five solid innings, and then he was pulled in the top of the sixth inning.

Corbett was able to come up with a couple of hits the entire game. The couple of times that he did not end up on base, he was able to completely square up the ball, hitting it directly at the players.

Corbett was also solid defensively behind the plate. He was able to handle everything that was thrown to him, and during the whole game, not one player from Young Harris tried to run on him.

The final score was 3-2, with the Rollins men starting their season with a strong victory. Their next series of games is against University of West Florida and starts at Alfond Stadium on Friday, Feb. 10 at 7 p.m. Games will follow at 1 p.m. on Feb. 11 and at 12 p.m. on Feb. 12.