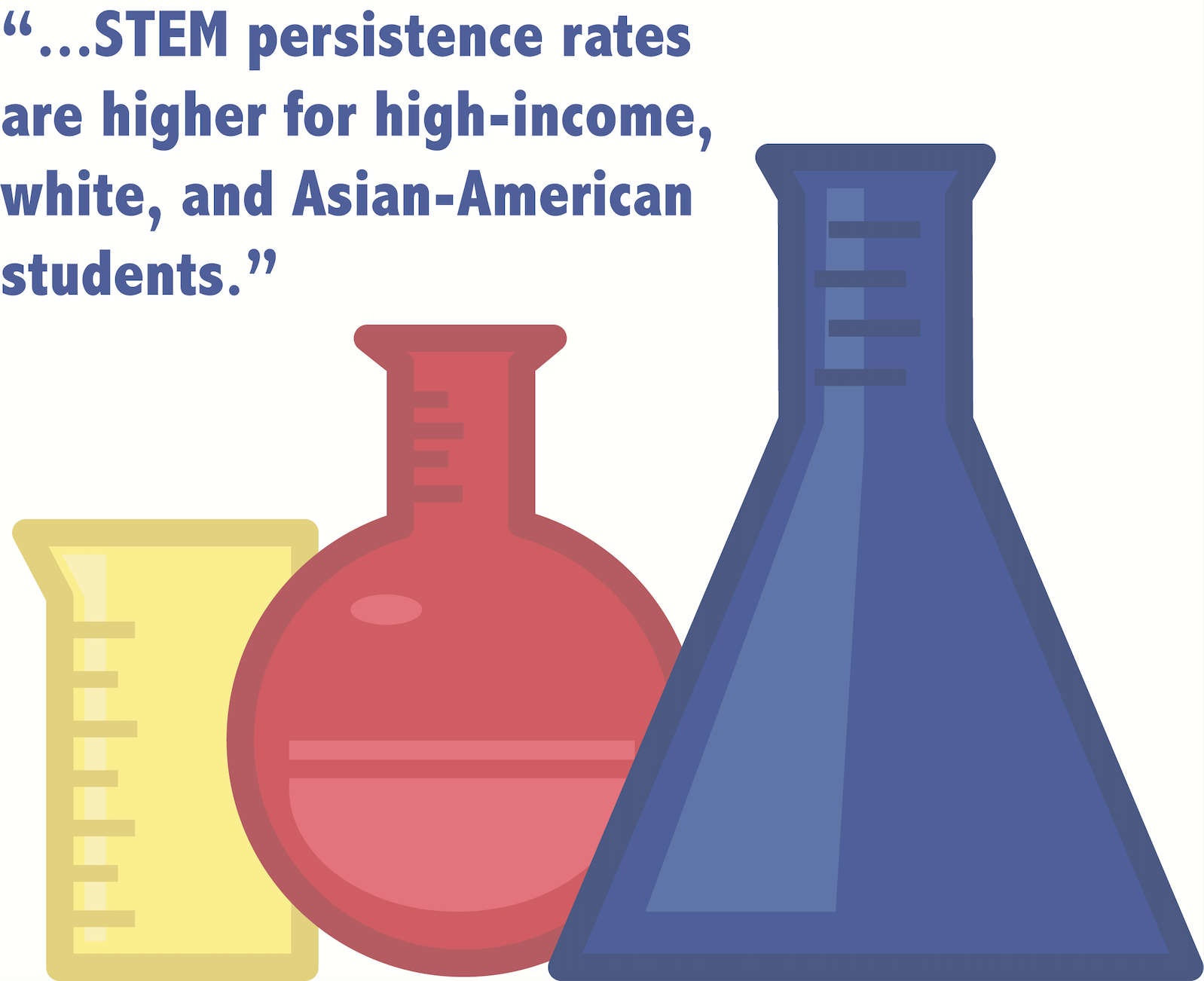 Sasha Labon (‘22) was admitted into Rollins with a pristine academic record. She was accepted into medical programs at two top state colleges, but she gave up her dream of becoming a doctor after her first few semesters as a biology major.

“My first semester of college was a complete wake-up call,” Labon said. “I was like, ‘Oh my God, I have never had to try this hard in my life to achieve even a C.’”

Labon is not the only STEM student who feels this way. National statistics show that, despite initial interest in STEM programs, many students of color drop out of them because they are not prepared to follow the rigorous course requirements.

Although Labon’s decision to switch majors was the result of a newly-realized career path, her story reveals a national trend that affects students of color at Rollins.

40% of black students and 37% of Latino students switch out of STEM majors before earning a degree compared to 29% of white students, according to federal data from the National Center of Education Statistics.

In Labon’s first-semester chemistry course, “we surpassed what I knew within two weeks,” she said.

After taking a year’s worth of chemistry and biology classes, Labon decided to switch her major to American Studies in hopes of becoming a medical malpractice lawyer.

Rollins cannot release the data on the number of students of color who drop their science major, said Dr. Kasandra Riley, associate professor and Departmental Chair of chemistry. She said that this rule is in place to protect students’ identities.

However, in a grant proposal written by Riley and her colleagues in Washington & Lee College, she acknowledged that the lack of diversity in STEM programs is a problem.

“Nationally, and within the ACS [Associated Colleges of the South], there is a lack of diversity among college science and math graduates […] STEM persistence rates are higher for high-income, white, and Asian-American students.”

As a result, a range of new Rollins initiatives have been created to increase diverse learning experiences in the STEM departments.

In Labon’s experience, she said it was true that many students of color dropped the major, which she attributes to adjusting to a new environment.

The difficulties she had were not the professors’ fault, she said. Rather, they were because of a lack of college preparation in high school.

“It’s just a matter of trying to find the new balance and the new studying habits and the new homework schedule,” Labon said. “It took me longer than others, and some people figure it out right away; some people don’t.”

Labon was comfortable in the classroom because she grew up in environments that were predominantly white, she said.

But for some of Labon’s friends and classmates who are also students of color, she said that “it’s a huge adjustment […] to go to a new place, learn a new subject, meet new people […and be] thrown into a completely new situation and environment in terms of diversity. I’ve had friends who have also spoken to me about it.”

Destiny Robinson (‘22) and Alexis Gregory (‘22) are minority students who came to Rollins from public high schools in Florida. They are currently biology majors, but they feel the preparation gap between themselves and other students in the classroom.

“Not everyone comes in at the same starting point in regards to chemistry, especially if you came from a public school,” said Gregory, who hopes to be an obstetrician-gynecologist (OB-GYN).

She and Robinson, along with other women interviewed, agreed that the required chemistry courses were much more difficult than the biology courses.

Chemistry classes are “20 times harder” than biology classes, said Robinson. “I know so many students that aced bio, and then when it comes to chem, they’re just like, ‘Okay I’m not gonna be a science major. I’m done; chem is just destroying me.”

Gregory was shocked when her professor handed back her first test. “You do all the practice problems, study like crazy […] and you get the test score back and nothing has changed,” Gregory said. She added that motivation to study only gets more elusive when your results are not changing.

Gregory pointed out that she did take AP chemistry when she attended Freedom High School in Orlando, Fl., but it was not the best experience. Her Rollins classmates “seemed to get it more than I did, so it gave the impression that they had earlier exposure,” she said.

Despite taking two to three AP classes a year at the local Dr. Phillips High School with a high GPA, Samijah Butler (‘22) felt that she was not as prepared as the other students in her class. She saw a difference between how she and other students of color succeeded in science classes compared to other students.

After earning a scholarship to attend Rollins, she started as a Biology major on the Pre-Med track. She always wanted to be a pediatric surgeon. However, she soon ran into trouble with her biology and chemistry grades.

When her parents expressed their concern for her academic performance, Butler tried to explain how rigorous her classes were.

“What most parents of color don’t really understand is that even though [their children] excelled in high school, they’re in college now, and an elite college at that,” Butler said. She is now pursuing a degree in psychology with a double minor in sociology and public health.

Dr. Susan Singer, vice president for academic affairs and provost, is well aware of the challenges in STEM for women and people from underrepresented backgrounds.

Singer was the director for the Division of Undergraduate Education at the National Science Foundation before coming to Rollins.

Singer said just because someone at Rollins is a member of an underrepresented group, that does not mean that they will struggle in the STEM programs.

“That is absolutely not true, but overall, there is a pattern that replicates the national pattern,” Singer said.

Her main question is, “How do you level the playing field? You can come out of high school as a top student, but that does not make the playing field even,” she said. “There are so many factors that are completely out of anyone’s control,” she said, like what state a student is from or how well-resourced their school district is.

Singer acknowledged that there is a lot of information to cover in introductory chemistry courses due to the standards set by the American Chemical Society. That is one of the biggest barriers for incoming students.

As a result, Singer has been able to fund some pilot initiatives such as offering Peer Supplemental Instructors (PSIs) for chemistry and teacher’s assistants (TAs) for biology to help out with entry-level science courses. She is working closely with Riley in the chemistry department.

“I’m optimistic we’ll get there […but] we have students that are in college now,” said Singer, “and we owe them the very very best experience we can provide.” She emphasized the extensive professional development that happens behind the scenes to foster more inclusive teaching practices.

Solutions are not helping enough

However, students still do not feel fully supported by these initiatives. Robinson used the new services last semester, but she said that they were not very helpful.

“The PSIs are students,” Robinson said. “They have so much on their plate already. They became unreliable, and you could tell it was in its infancy and they didn’t really know what they were doing.”

ChemTutor did not live up to Robinson’s expectations either because of how basic its information was. She said that the material related to using algebra in chemistry and understanding molecular weight, which are topics covered in the beginning of the semester and therefore not helpful.

“It’s frustrating to see them now make changes to better support their students when they didn’t do so before. Especially with the preparation for organic chemistry because a lot of us could have used that,” said Gregory. Gregory is planning on taking organic chemistry at another university during the summer.

Gregory also applied to a diversity inclusion grant funded by the Rollins Diversity Council, hoping to study the experience of women of color in STEM programs on campus.

Although Rollins is currently making changes to its STEM departments, they will require time and money.

“Transformation takes time, but we are excited about the benefits of the many projects we are undertaking in a united front across many departments,” said Riley.