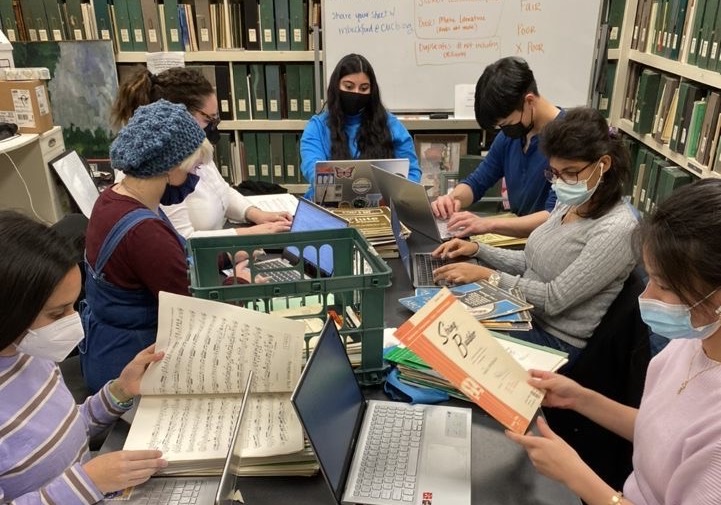 The Atlanta Immersion was led by CLCE Community & Office Coordinator Diana Ngai and Bonner Leader Bobby Sena (‘24). The Immersion focused on food accessibility and insecurity in the South.

“We had lots of different ideas on what we wanted to focus on, and when we started looking at the areas around us, we realized that one of the larger issues facing areas in the South specifically was food insecurity and food deserts,” Ngai said. “So when we looked and chose Atlanta, we realized that there were many nonprofits that were doing the same kind of work that we could learn from and participate in during our break.”

Ngai and Sena chose to work with two nonprofit organizations: The Food Well Alliance and the Atlanta Community Food Bank. The Food Well Alliance works to build community gardens and urban farms across metro-Atlanta. The Rollins group worked on restoring a garden space that would be utilized to help those in need.

“We received a deeper understanding about the importance of local agriculture in communities,” Sena said.

Their work with the Atlanta Community Food Bank focused on fighting child hunger in Atlanta and North Georgia through gathering, giving out, and organizing donated food and goods.

“During our volunteering with the Atlanta Community Food Bank, we helped with sorting donated items, checking expiration dates on donated items, and organizing,” Ngai said. The group was able to make over 8,000 meals for those in need.

While Sena and Ngai were working in Georgia, group facilitator and Bonner Leader Anecia Inbornone (‘22) was in Boston for an Immersion centering on youth development with a focus in the arts.

During Inbornone’s trip to Boston, her group worked with organizations related to music and dance.

“One organization, unfortunately, had a flood, so a lot of their music was ruined so we were digitizing their music, so we were helping them organize it, letting them know what they had, and making a library of it,” Inbornone said.

Inbornone went on her first Immersion trip during her freshman year and has facilitated three Immersion trips since. She said that the Immersion program has been a huge part of her journey at Rollins.

“I didn’t know what I wanted to do when I came to college and what I wanted to do after, but service was always going to be a part of that, and Immersions really solidified that. I’m now applying for AmeriCorps programs and hoping to do AmeriCorps. […] I would definitely say Immersions have inspired me to do that, to make change in a community,” said Inbornone.

The Immersion trips were not the only excursions planned for Spring Break. Field studies to Italy, Egypt, and Poland were on the schedule; unfortunately, the Poland field study was canceled.

Talia Viera (‘23) was supposed to attend the Poland field study. Viera said, “We were going to visit different Holocaust sites as well as attend a Shabbat dinner at the Jewish Community Center (JCC). Those at the JCC were instrumental in putting together our trip.”

Ultimately, the JCC was turned into a refugee center for Ukraninas fleeing the Russian invasion, and the trip was canceled.

“We did not want to take up resources or space that could go to those who really needed it,” Viera said. The students taking the Poland field study were fully reimbursed via Fox Pay.

The Immersion program is run out of CLCE by Assistant Director Victoria Teske and is available to all students and staff members, who are also encouraged to join as facilitators. As a facilitator, one has the opportunity to lead and plan an Immersion trip. The program runs all year round and can include a weekend alternative trip or a one-week trip. Typically, the Immersion trips are at no cost to the student.