On Saturday morning, more than 1,300 athletes from colleges all around Florida competed at the Fall Rowing Regatta at Stetson University’s training site on Lake Beresford.

This was the fourth year for the regatta, which continues to grow in size and has become the largest headrace in Florida. It is an opportunity for colleges, high schools and master’s programs to compete and show what they are made of.

I, myself, was part of this event and enjoyed every minute of it.

The Rollins crew team hit the road at exactly six in the morning with a silent campus and lights illuminating the brick roads, waiting for the sun to come out. 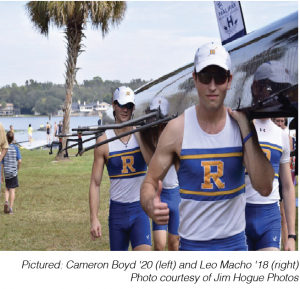 All teammates were able to make the bus, avoiding oversleeping and spending the hour-long drive getting mentally prepped for the day ahead.

The cold weather ensured that sweatpants and jackets were worn by most while others regretted their wardrobe choices.

When we arrived at Lake Beresford, there were lines of cars, buses, and many boats throughout the area, some of different color and symbols representing the team.

It was a large event, attracting nearly 4,000 people between athletes and spectators.

Every year brings new people and new teams to the table,  making competition more intense and pushing groups to be stronger and faster.

Shawn Pistor, Head Coach of the Rollins Crew program, said that he didn’t want the team to focus on winning, but to have a great time and to improve on their techniques, skill, and most of all, heart: “There is no point in racing if there is no heart and dedication.”

As the coach and teammates set the boat and got everything ready, the girls prepped to go on the water in the first race of the day for Rollins. The Women’s Rowing team rowed and did not stop until the end, through multiple obstacles, and the team placed 3rd in their division.

Team after team, boats coming in and coming out, people kept their head high and did what they love. The women’s novice team rowed and were followed by the men’s varsity team, each racing with everything they had.

The water was a bit choppy, but that did not stop the Tars’ teams from placing high in the competition. Another amazing part of the race was the weather, with a cool breeze and steady sunlight; it could not have been a better ending to the day, feeling accomplished and relieved that there weren’t any injuries or any problems. This regatta was the first and last race of the fall season, but there is much more to come in the spring. Stay connected with Rollins Rowing Teams to be tuned into the races and be there to support our Tars!