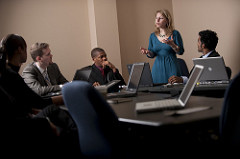 Despite an increase in funds for Wi-Fi, service provider issues cause connection problems, according to IT

The mass Wi-Fi problems that the Rollins community has dealt with this fall are due to the campus internet service provider, CenturyLink, not upholding service deals and bugs getting into the software, according to Troy Thomason, chief information officer and assistant vice president of the Office of Information Technology (IT).

Campus frustration grew when returning students and faculty faced a wide range of Wi-Fi connection problems, causing disruptions in many classes and chaos for student assignments.

Thomason said that many of the connection issues at the start of the semester were vendor-related, meaning that the companies who supply the tech equipment that supports the Wi-Fi were not delivering what was promised. These disruptions, however, are being fixed, according to Thomason.

“There were software bugs on the routers and our [Internet Service Provider], which for Rollins is currently CenturyLink, wouldn’t give us what we paid for,” said Thomason. CenturyLink openly advertises its use on college campuses on its website, promising “high-speed, on-demand networking to power education.”

“We’re holding vendors accountable and trying to get out of our current contract with them, but it’s a slow process,” said Thomason. Currently, IT is evaluating new vendors.

“Unfortunately, the timing with the beginning of the semester was bad,” Thomason said.

“We went from having no load over the summer to a ton of load on our network. Our whole lives revolve around tech support, it wasn’t that we weren’t ready for it, but those bugs manifest when there’s a huge spike in server activity.”

Students were quick to seek answers about the Wi-Fi situation. Savannah Watermeier (‘20), Student Government Association (SGA) senator, voiced concerns that the solution proposed by student government last year has not been followed.

“Me and two other senators met with Leon Hayner, the senior director of residential life and explorations, and drafted a bill with him stating that Rollins would get rid of cable in dorm rooms but keep it in the common areas. The money that was saved was going to go towards creating better Wi-Fi. What actually happened was that cable was removed everywhere except for Dave’s, and I have no idea where that money went,” said Watermeier. The bill was never officially passed due to a time constraint, as it had been drafted toward the end of the semester.

Hayner confirmed his role in discussions with Watermeier and the senators, including survey data about cable usage, which showed that only 20 percent of students used the cable and that majority preferred stronger wifi over keeping cable television hook-up. “I never saw a final draft of the bill nor was the RLE office a supporter of any particular legislation,” said Hayner.

“Clearly campus is still having Wi-Fi troubles. The majority of SGA said they still have issues. IT claims they fixed whatever the issue was, but, honestly, that’s just not true. It’s now past the middle of the semester, and quite frankly this issue should’ve been dealt with before school started or at least within the first few weeks,” said Watermeier.

Thomason confirmed that the money previously allotted to cable went to IT. However, he said that the intent was not to improve the Wi-Fi. The intent was to increase bandwidth, or the range, of the Wi-Fi. “We did a Wi-Fi overhaul in the summer of 2017 prior to the cable issue, especially in the resident halls,” said Thomason.

Thomason wanted to emphasize that cutting cable was not about money usage; students were not using the cable and its master system was located in the Mills building, which was on its way to being torn down. “It wasn’t worth reinvesting. So instead we used that money to double our bandwidth,” said Thomason. He said that this should be saving the campus about $50,000 a year.

According to Thomason, the IT crew is always investing to improve Wi-Fi infrastructure, support larger amounts of usage in the future, and meet the constant growing needs.

“This isn’t just where people go to school; this is where they live,” said Thomason. “We know they’re watching Netflix and other streaming services and playing online games, and we don’t discourage that. We try to keep that in mind to the best of our ability,” he said.

As addressed in a campus-wide email a couple of weeks ago, Thomason believed those issues have been cleared up. He said that the biggest problem they now have is getting students to let IT know when they have a problem and being willing to engage with them to fix it.

“People automatically assume that we have all the answers and know all the problems,” said Thomason. “We need students to work with us, tell us there’s a problem, and let us help you…. When people have issues, call or email the [IT] help desk. That’s what they’re there for,” he said.