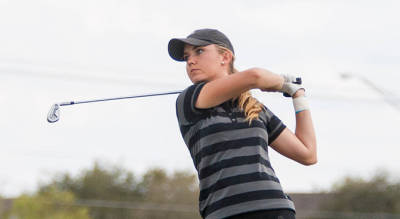 Rollins women’s golf has been dominating the course this spring. So far the Tars have won three tournaments and are ranked No. 1 heading into post season. The season has proved record breaking as the Tars shattered two tournament scoring records at the Peggy Kirk Bell Invitational (March 2-3) and set the tournament scoring record at the Barry U Invitational (March 16-17). Their success exceeds Division II as Rollins has also been the runner-up at two Division I Tournaments held at Princeton University and UNC Greensboro. The Tars have been led by standout performers such as junior Annie Dulman ’16. Dulman is currently ranked 9th in the nation in stroke average and at one point was ranked No.1. The junior is ranked 4th in the Sunshine State Conference in scoring average and has seen four Top-finishes this spring. Most recently, Dulman won the Barry U Invitational while setting the tournament scoring record. She was also named SSC Golfer of the Week on Monday March 23. Rollins has also seen success with some new faces this spring with Madison Lellyo ’18, currently ranked 12 nationally in scoring average (No. 2 among freshmen). Lellyo is ranked 5th in SSC scoring average, right behind teammate Dulman. She won her first collegiate tournament in the fall at the Ross Resorts Invitational. Since then she has placed Top-5 two more times and was named the SSC Golfer of the Week. Heading into postseason the Tars will face off Sunday May 3 at the NCAA Division II South Region Tournament. This will be at the Savannah Quarters Country Club in Savannah, Georgia.