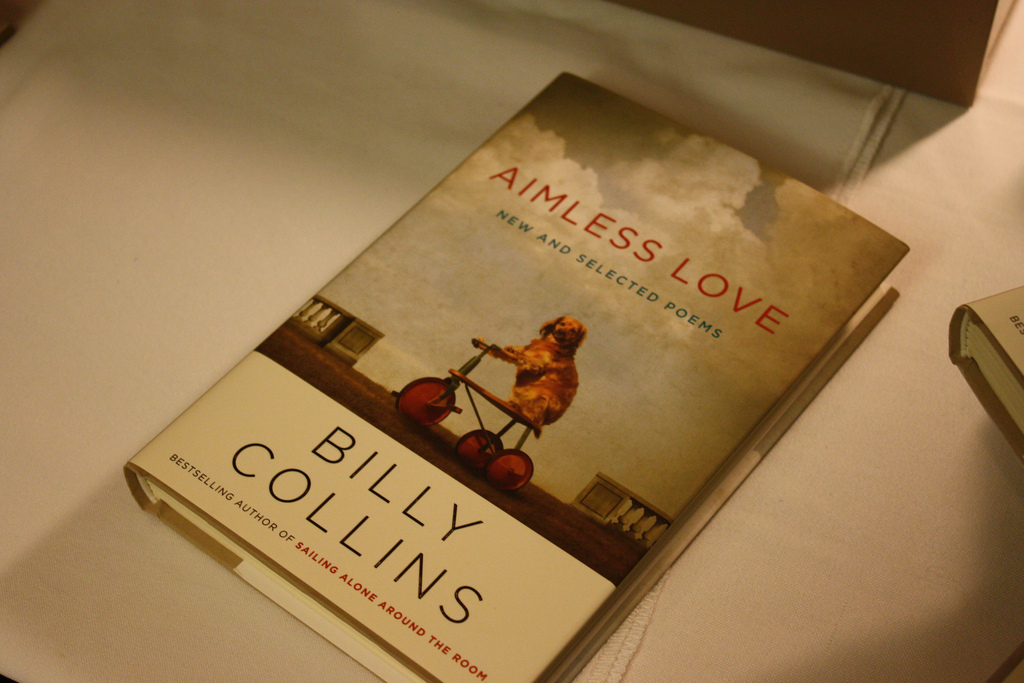 Despite thirteen years in Florida public schools, mostly in the IB Program, it wasn’t until my final year of high school that I considered reading poetry to be more than an obligation to my GPA. Whether it was via the words of Robert Frost’s ‘The Star Splitter’ or a recognition that Shel Silverstein had practiced the same art form -albeit with less subtlety- which resurged my interest, I can’t say. Perhaps the unbridled enthusiasm and refreshing insight of my teacher, a Rollins alumni (I’m talking to you, Jane Cooper), played a hefty part in my intrigue. My grandfather wrote poems and I had dwelled on them for wisdom or insight; I read them for their predictable comfort: the gentle breeze, the knowledge that one as staunch as he still had emotions and that these were transferable into a public forum of verse. The Winter Park Institute’s reading of Aimless Love with Billy Collins, a Senior Distinguished Fellow and renowned US Poet Laureate, gave Tuesday evening familiar tinges of nostalgia, with the expounding wit of his that we have come to love.

Collins spoke fondly of his introduction to the realm of verse: his mother had a speaking voice and a poetic voice that alluded to traces of Shakespeare on a whim. His own affinity would transcend even the treacherous halls of his high school years. Aside from quoting his own works, he would toss in quirky words of wisdom, like of eggs and bacon: “The chicken contributes, but the pig gives his all.” One viewer asked Collins what he felt of the accuracy of his poems once translated into other languages, which Collins duly noted that he didn’t have the ability to comment on because he couldn’t read in the other languages. However, he declared his honor to have his work was able to integrate into another culture. This was distinct from fiction writers, who he said peak over fences and write about people’s lives; poets write about their own view of life through a window, and “when he leaves the house, about the occasional flowers or nature outside”. But, Collins claimed that music may be more popular due to its social aspect, whereas poetry is more intimate, singular. Billy Collins made a point to acknowledge the general absence of humans in the poems he is compelled to write.

Collins playfully noted that having access to the Library of Congress at his leisure was an ego booster; while now, precociously noting his status as older than Cheerios cereal (please see poem entitled ‘Cheerios’-that he is lucky enough to grace the Rollins stage and invoke waves of sentimentality. I found myself smiling in different ways: the ‘that’s so true’ smile, or the ‘I never thought of it that way’, or the ‘that reminds me of something/someone” smile, and all of the latter during the reading of The Lanyard. The audience cradled civilians, professors, English majors, non-majors, singles, couples. There was not a single spare seat. I admired the vastness of that crowd in an era that is often overwhelmed with more emojiis than emotions. We had all found our way there, despite the hustle outside of the walls of the auditorium. This simple migration was its own art. In fact, the stranger who sat beside me turned to her-presumed-husband during the readings and said, “Thank you for showing me poetry: this is sincere and beautiful.”And that’s why we keep it around.