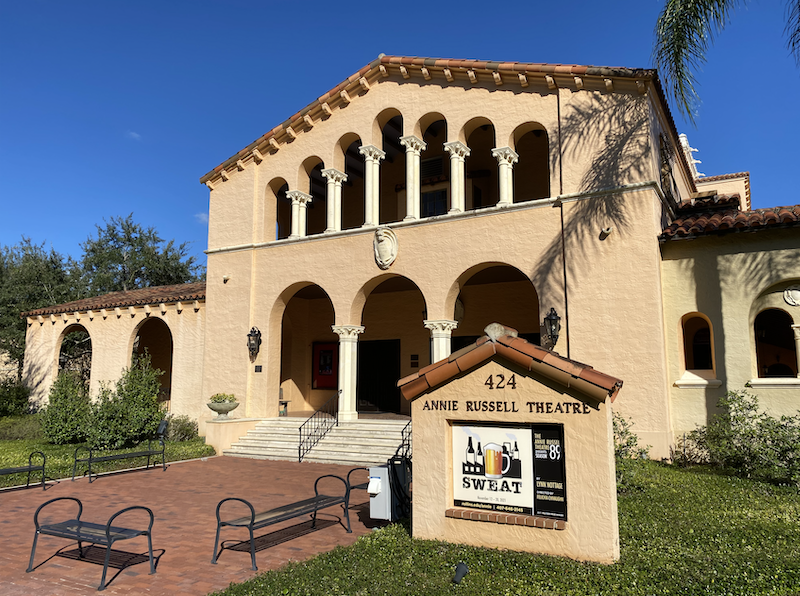 “Sweat,” the Tony nominated play by Pulitzer Prize-winning writer Lynn Nottage, is set to open on Nov. 12 at the Annie Russell Theatre. Felichia Chivaughn, Thomas P. Johnson Distinguished Visiting Artist, is directing the play, which will be the first of the 2021-2022 season. The season will exclusively feature adaptations of Pulitzer Prize winning plays.

“Sweat” follows the residents of a small, industrial town as they confront a rapidly changing world. Set in Reading, Pennsylvania—one of the poorest cities in America—“Sweat” depicts the interlocking stories of members of a tight-knit community as they grapple with the ruinous effects of deindustrialization. In the process, unshakeable bonds between family members and lifelong friends are put to the test.

“It’s about people experiencing a time of economic instability,” said Chivaughn. “We get a close look at what they’re left with when their lives and livelihoods are used for political gain and disregarded. That pressure leads them to attack each other when they’re fighting for their lives.”

The conflicts between community members and individual identities are a major focus of the play. As the characters’ situations continue to spiral, resentment begins to creep into once rock-solid relationships.

In one of they play’s storylines, a Colombian-American busboy named Oscar is viewed as a scapegoat for Reading’s troubles due to his ancestry.

Another storyline follows Cynthia, a black floor worker whose promotion to overseer puts a strain on her relationship with her friend Tracey—a white woman who applied for the same position. Tracey grows resentful, coming to believe that Cynthia only received the promotion because of her race.

“I think the main theme of this play is learning to come together in a time of need,” said Ani Henry-Walker (‘25), who plays Cynthia. “Unfortunately, that is not what the characters do, and we see how it affects their lives. Even though they all had their troubles, they should’ve been able to come together to fight the true enemy instead of each other. I hope that people leave the play feeling a sense of unity with the community.”

The rehearsal process started at the beginning of October, lasting for a total of six weeks, with the cast meeting six days a week. According to Juan Cabrera (‘23), the actor who plays Oscar, Chivaughn and the cast spent a week going over the script and discussing the characters and themes before they started blocking scenes.

“It was very important to Felichia Chivaughn that we understood the core of the story and our characters and to build trust with one another before actually getting into blocking scenes,” said Cabrera. “‘Sweat’ has a lot of fun scenes and tender scenes, but it also has a lot of really dark, intense scenes. So it was really important that we built trust as a company first.”

“I hope that they can never unsee it,” said Chivaughn, when asked what she hopes audiences take away from the play. “That they carry it with them. That they hold tight to the idea that we should care for each other. I hope that it opens their eyes and allows them to see people who are different from them and have empathy for them.”

“Sweat” opens on Nov. 12 at 7:30 p.m. The Nov. 13 performance will feature an ASL interpreter for auditorilly-impaired audience members and a Talkback immediately afterwards, in which audiences will have the opportunity to ask the cast and crew questions about the production.

The performances on Nov. 17 and 19 will also feature Talkbacks, with the former being sponsored by the Black Student Union.

Tickets, which cost $20, can be purchased at the Annie Russell Theatre website or by calling (407)-646-2145. Discounts are available for Rollins students and alumni.