A bond on and off the field

Rollins softball players Hailee Keisling ’17 and Chelsea Reed ’17 have much more in common than your average teammates. Like many athletes at Rollins, their love for the sport started at a young age: Keisling’s after finding inspiration in her older sister and Reed’s after losing interest in gymnastics.

Meeting on the field as freshmen, the players became “throwing and hitting partners,” and “really good friends,” said Reed. After rooming with other people for three years, these teammates decided to double as on-campus r 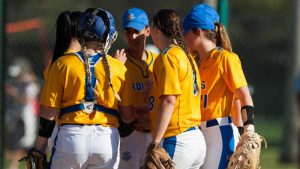 These roommates also double as team captains, a rare dynamic to bring to the organization.

“You just become so familiar with that person that you start to learn how to handle certain situations better. It really does help with team chemistry,” said Keisling. Reed added, “…we are able to figure out things that could better help the team on and off the field.”

Both girls reported that their rooming situation only created a positive impact in their friendship, as well. “Chelsea is usually the person I ride to practice with, eat most of my meals with, and do random stuff with… [including] hang[ing] out with other teammates,” said Keisling. In addition, on some weekends the two go to the beach or walk around downtown Tampa together.

However, do not mistake these two for mere imitators. Though they have many other things in common, their academic interests differ greatly. Keisling is a part of the Communications department while Reed is a Business and Social Entrepreneurship major. “We’ve never had a class together while being at Rollins,” said Reed. Keisling also works at the recently relocated Rollins Bookstore.

Becoming roommates did not come without its hitches. “Chelsea has woken me up in the middle of the night before because of bad dreams and to make sure that I was there,” pointed out Keisling. Reed remembered waking up to a bug in the room at 4 a.m.: “Both of us hate bugs so we both couldn’t go back to sleep until we found the bug.” The two searched for half an hour before Keisling successfully squashed the intruder. What they described as incidents came across as examples of their close bond. “Hailee has always been my best friend, but from rooming with her this year she has become like my sister,” Reed said.

Overall, becoming roommates has only brought them and their team closer together. In fact, Reed remarked, “If we had roommates that weren’t teammates, our [softball] schedule would probably bother them.”

Team members sometimes report to practice or workouts early in the morning, which was the case for the two of them last semester.

“For us it brings us closer because we vent to each other when we have problems and help each other when we need motivation,” Reed said, though she warned against teammates rooming together their freshman year in order to help create more new friendships and “branch out.” Keisling agreed, “establishing a friendship and relationship outside of the sport with that teammate is super important.” However, “After freshmen year I say ‘go for it,’ because it’s been one of my best decisions,” Reed reflected. Perhaps more teammate and even team captain rooming situations will be in the Rollins campus’ future.