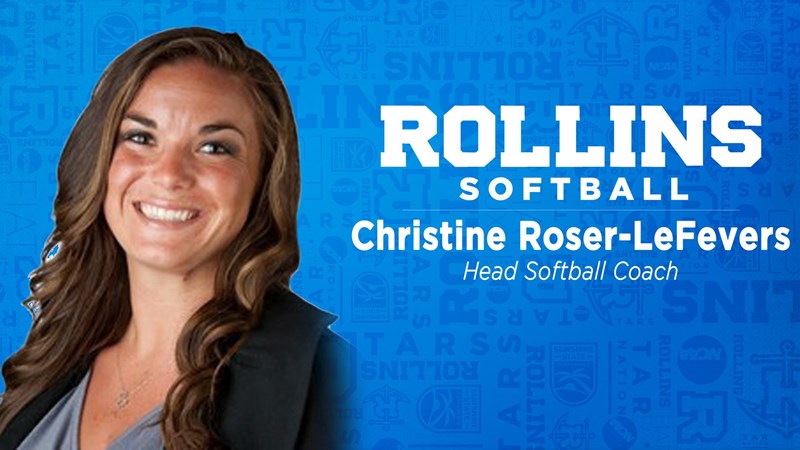 After Coach Michelle Frew’s departure last month, Rollins Softball was proud to announce the hiring of Coach Christine Roser-Lefevers (‘11) as the 10th head coach in the history of the program.

“I feel extremely honored to be named the head coach at Rollins College […] It has always been a dream of mine to coach here,” Roser-Lefevers said.

A Rollins alumna, Roser-Lefevers had an accomplished career as a Tar. When she graduated, she led the program in all-time hits, doubles, home runs, RBI, and runs. Her success continued into her coaching career, in which she led Seminole State College to a 51-9 record and brought Queens University its best season in its program’s history. She attributes her success to teamwork and chemistry.

“We were very fortunate to have a ton of talent when I was a student-athlete, having won the conference title three of my four years and competing at regionals all four years,” she said.

Rollins Softball “has established itself as a regional powerhouse,” Roser-Lefevers said, especially over the last few seasons. In 2021, the Tars posted a 21-4 record, which included a conference championship. In 2020, the team finished 21-3, and in 2019, it finished 38-11.

This success comes with “a great deal of expectation on my end,” Roser-Lefevers said. “I will do everything in my power to continue down the same path that we’ve established over the years while also taking the team to new heights.”

Roser-Lefevers said she sees Rollins Softball as “a national contender year in and year out. That is the goal we have discussed as a team […] We want to compete and strive for excellence at a championship level day-in and day-out.”

According to Roser-Lefevers, the team continues to hold itself to a high standard of excellence. They have “a phenomenal winning culture that teams and recruits across the country recognize.”

Roser-Lefevers said, “I am very familiar with what championship-level softball looks like. […] When I played, the teams we had were tough, gritty, self-led, talented, and smart. This team is all of that and more.”

Coach Roser-Lefevers said she wants “this program to be something alumni and fans are proud of.”

Rollins Softball will host its first home game of the 2022 season on Feb. 27 against Wilmington University.

“We are so excited about the future of this program and cannot wait to share our success on and off the field with all alumni and fans,” Roser-Lefevers said. “We hope to see many alumni, family, friends, co-workers, and students at our games this year and for all the years to come.”