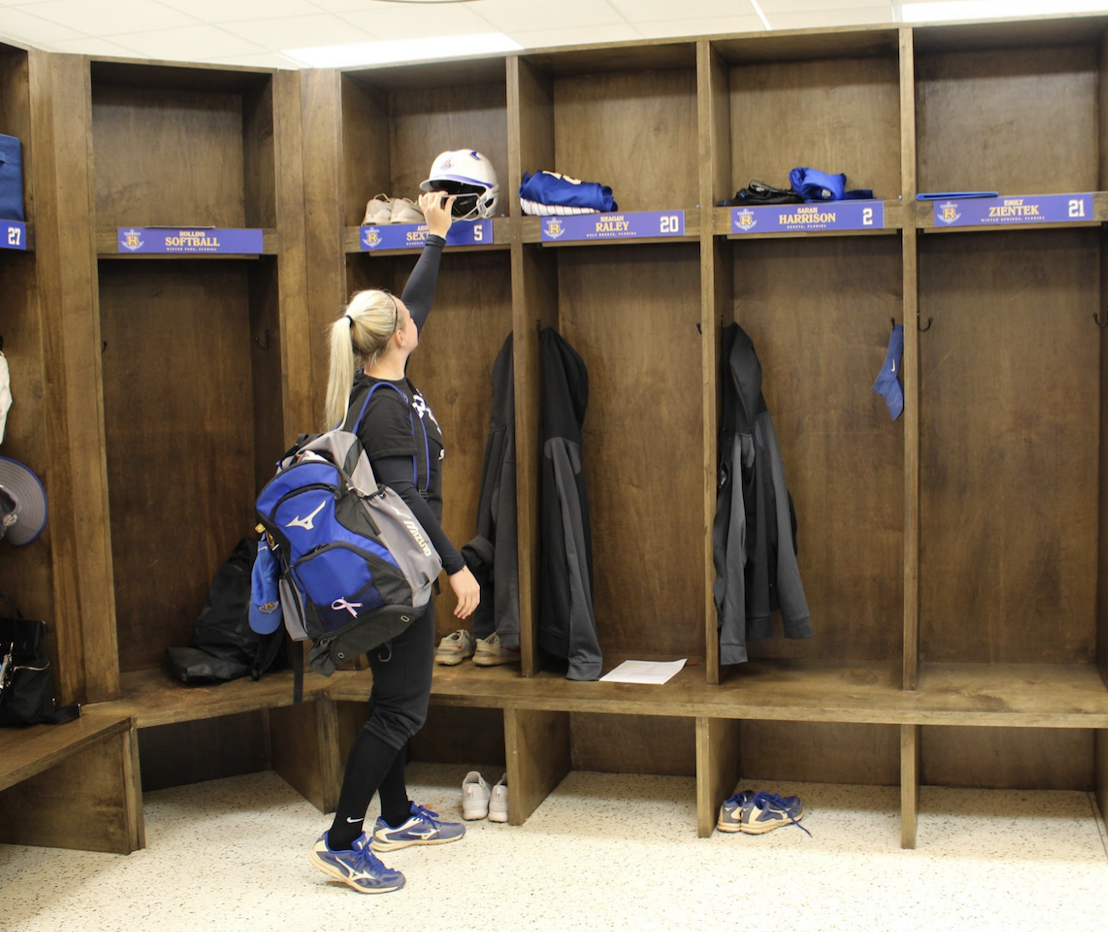 After 23 years as head coach of the Rollins softball program, Michelle Frew will finally get to gather her team in its own locker room facility.

The City of Winter Park leased a building to Rollins located behind Martin Luther King, Jr. Field, where the softball team plays and practices. Over winter break, the College transformed the unused space into a sports clubhouse filled with personalized wooden lockers, leather couches, a conference table, and a television.

“What our athletic director and president did was amazing, coming through with this,” said Frew. “For years, we’ve always said: ‘Why can’t we get that building out there? They don’t really use it for much.’ No one really made it happen, but they did and we’re thrilled.”

The team received the facility after a long fight led by members who pointed out the safety threats and disadvantages they faced without one.

“We’ve had people break into our cars or the field and steal our bags. Base paint was used to vandalize our dugout,” Erin Crawford (‘20) said. “People have hopped the fence and there were no security cameras, so having a building where we know that we can go in and be safe is helpful.”

The break-ins were so frequent that, instead of tactical pointers, freshmen were first and foremost told to conceal their belongings, Crawford said. Crawford voiced her concerns in a piece published in The Sandspur last fall.

After years of complaints by students, coaches, and parents, the team can finally breathe a sigh of relief.

“Now, we don’t have to carry as much equipment back and forth. It makes training smoother and it makes it easier to focus on softball and not worry about other stuff,” said first baseman and outfielder Victoria Whalen (‘19).

Frew added, “It certainly helps with recruiting. Kids walk in here and they go, ‘Wow, look at what they have.’ They want to come here because they see that the school cares about their softball.”

Crawford remembers the frustration when seeing the infrastructure in other schools. “Every other team had it. We knew baseball had two locker rooms before we even got one. It’s hard not to feel jealous,” she said.

The news has propagated throughout the Rollins softball community.

“A lot of previous players are really happy about this and it’s something which they wish they would have had,” said second baseman Abigail Sexton (‘19). “They’re the ones who helped build this program, now they’re super excited that we get to fully experience it.”

Sexton highlighted how the locker rooms have rendered the training more convenient: “Just being able to change in there, instead of coming straight from class, rushing and changing in the dugout. It’s something a lot of parents have been fighting for.”

The clubhouse offers players a space to relax and bond as a team outside of their 20 hours of weekly practice.

“I didn’t think we would be able to do so much with it. The girls do homework in here, they had a movie night, they have dinner. The team is closer now, because they don’t go in their different directions after practice,” said Frew.

In the hopes that it will translate into the field, Frew is happy with the newly-found sense of unity.

“Once we saw it, everyone’s morale skyrocketed. It’s our own space to bond and form relationships,” said Whalen, who echoed the opinion of many upperclassmen. “We’re really appreciative that the school has been willing and able to do this for us. It’s been something that we’ve been fighting for a long time, and it definitely is making a big impact in our team.”