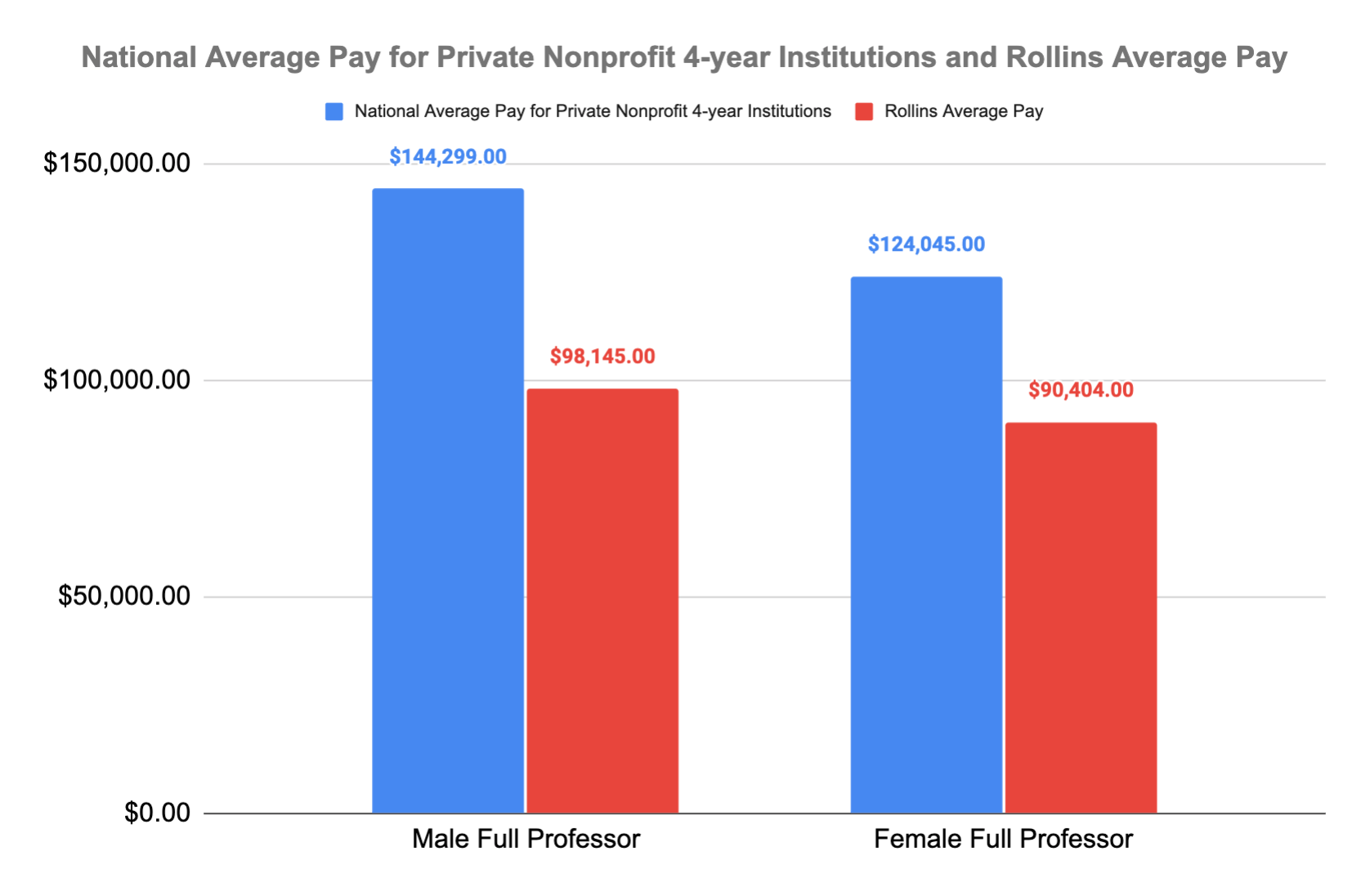 A recent study by Rollins administration and faculty analyzed the discrepancies in faculty salaries according to gender, race, and ethnicity.

The college underwent this endeavor last year under the leadership of Dr. Don Davison, the chair of the Public Policy and Political Economy Department and the former chair of the Faculty Affairs Committee.

Provost Susan Singer convened a group in Fall 2019 to begin this research. The Faculty Salary Equity Committee (FSEC) met approximately once every three weeks to research previous studies done by universities across the country, develop a methodology and set of best practices, and then refine the equations being used to study professor pay data. * The committee created four advanced models each using 18 factors.

In reflecting on the results of the analysis, Davison said that there was no evidence of bias in salary based upon race or ethnicity, nor was there any disparity based on gender. Most of the variance found was due to length of employment, number of years in rank, year of hire, and market conditions for specific disciplines.

Davison suggests, however, that this is due to issues such as occupational segregation.

Occupational segregation refers to the higher number of male employees who work in Business, Economics, and Computer Science—the three departments that have market-driven salaries as opposed to set base salaries. Singer explained that as part of the Faculty Compensation Philosophy that was passed in 2017, the faculty considered the need for market-driven salaries in high-demand fields.

Within her position, however, Singer has worked to ensure that all professors fall on a similar track for pay given their experience. After the Faculty Compensation Philosophy was passed, the first action was to get the entire faculty up to a determined equitable base salary. While the report does not quantify this base salary, it does reference percentage based raises, such as the net increase of 5.6 percent from 2016-17 to 2021-22 when inflation is taken into account.

Singer created a five-year salary report for all faculty at Rollins, and by using scatterplot analysis she has been working with the college to correct for any outlying salaries that were not up to the equity standard.

The consequences of historical inequities

Additionally, “you could have a situation like at Rollins where the higher [paid] rank of full professors are more male. There are more high-rank male professors with large amounts of [years of] service,” Davison said. This holds true at the national level as well, where in fall 2018 approximately 65 percent of full professors were male and 33 percent were female.

The national gender pay gap for professors is almost double that of Rollins, with male full professors nationally making approximately 14.04 percent more than female professors compared to 7.9 percent more at Rollins. However, Davison said that “to simply look at salaries as averages can mask different kinds of trends that would explain those differences.”

Singer agreed, saying that salary data needs thoughtful analysis of gender, race, and ethnicity within the same broad disciplinary domain and level of  experience in order to establish the root cause.

Singer said that, while men do earn more on average in full professor roles, it is mostly due to the accrual of years. Someone with full professor status for 30 years simply won’t have a comparable salary to that of a newly-promoted full professor, Singer said.

Kania said that less than 30 percent of faculty positions are on tenure tracks, and that this percentage has most likely shrunk more due to COVID-19.

The new challenge for Rollins has been identifying whether there are any obstacles preventing women from becoming full professors earlier in their career, said Singer and Kania.

A Brookings article from 2019 highlighted previous studies that found that only 27 percent of tenured faculty at four-year institutions were women, and “women experienced disproportionately high rates of leaving academia by their second or third semesters.”

Singer noted that in terms of demographics, even as the professoriate becomes more diverse, academia is still a disproportionately male-dominated environment in higher-level academic and administrative roles. The same can be noted for the representation of people of color in these spheres.

However, this doesn’t reflect the demographics of students, where Singer explained more female students are attending school than male students, and students of color are beginning to increase in proportionality. In the 2020-2021 school year, the breakdown of students by sex was 60 percent female and 40 percent male; additionally, approximately 38 percent were nonwhite.

Singer said the college is also looking at how to prevent salary compression, or the lessening of raises and opportunity for economic growth as a professor remains with the school for a longer period. Singer’s five-year Faculty Salary Report explained how these efforts were being made, including a “$1600 base increase in addition to the 3 percent increase [for the salaries of all continuing faculty].”

Looking to the future

Kania has done equity-based salary work similar to Singer’s, balancing the need for equitable pay for faculty while keeping tuition from raising significantly for students. As economic challenges are presented in the coming years due to the COVID-19 pandemic, Kania said that the challenge of ensuring professor salaries keep up with increases of the cost of living will be a major factor in how the future salaries of staff are predicted.

When discussing pay, Kania, Singer, and Davison all emphasized that the work for pay parity is ongoing and that this is simply a start to the work to be done.

As a woman in STEM, Singer explained how she has experienced pay discrimination before, “and I don’t want anyone here to experience that.” In addition, Singer emphasized that “this is different from saying [Rollins is] paying what people are worth.”

With other teachers in her family, Singer said she is acutely aware of how underfunded education is at all levels, as well as the impact faculty has on students.

“We undervalue the impact that our faculty have,” Singer said.

In terms of salary equity, however, Singer asserts that “we are paying equitably” and that Rollins is committed to continually working to improve.

“Equitable pay is like exercise; you don’t go to the gym once and [say] you’re done. This is an ongoing thing,” Kania said.

* Members of the FSEC included the following faculty and staff: