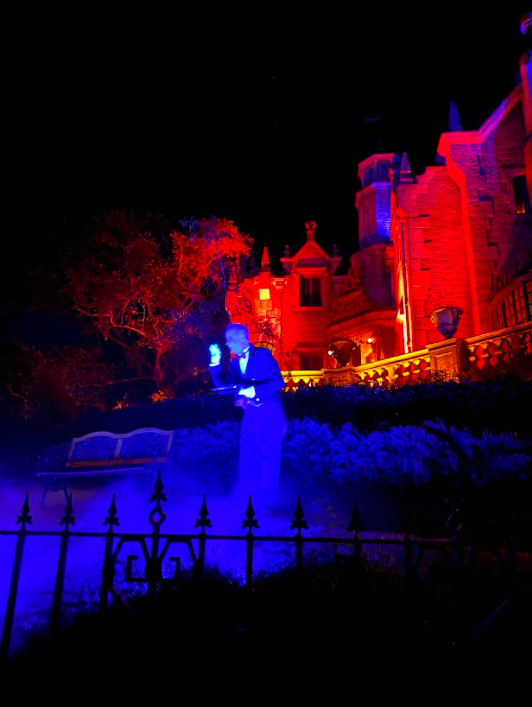 As humidity wanes in Orlando, one could say that spooky season is now upon us. For Walt Disney World, however, Halloween started back in August with the debut of the Disney After Hours Boo Bash, a modified version of their classic Halloween celebration, Mickey’s Not So Scary Halloween Party (MNSSHP). As an avid Disney fan, I could not help but attend—not once, not twice, but three times.

Boo Bash takes place on selected nights from August through October. When the Magic Kingdom closes, there is a 30-minute transition period before the event begins. Prior to COVID-19, there was an hour of downtime; a shortened period made for chaotic crowds, as closing time coincided with the Happily Ever After fireworks display and caused some delays.

Disney World prioritizes the experience for paying Boo Bash customers, so characters and cavalcades were timed later in the evening to ensure that day guests fully cleared out. Since Boo Bash itself is only three hours long, efficiency is everything if you want to hit all the highlights.

Characters at Boo Bash are few and far between. Some characters such as Goofy and Winnie the Pooh are easy to take selfies with because they are close to the ground. Others, such as Chip and Dale, wave from balconies, making them harder to get in frame (but they are cute nonetheless).

The only non “fur characters” are two happy haunts at the Haunted Mansion; they entertain guests travelling through the queue. There is no set schedule for characters, so you may have to keep checking back to find your favorites.

Another place to find characters is on the cavalcades, which are broken up parades. Boo Bash features four of these, which each appear twice throughout the night: Mickey and Friends, Jack and Sally, Villains, and Dragon Maleficent.

The cavalcades are scheduled close enough together that it is easy to watch them as a longer parade. It is fun to see the characters interact with costumed guests, but otherwise the calvacades are nothing new.

Since Boo Bash is the modified replacement of MNSSHP, it is only natural to want to compare the two. If you want to enjoy Boo Bash, though, you must avoid making that comparison.

MNSSHP was a staple of the season. The party was five hours long instead of three and featured exceedingly better entertainment: Halloween fireworks, a Hocus Pocus stage show, attraction overlays and enhancements, a parade, and meet-and-greets in every “land” throughout the Magic Kingdom.

Certain aspects remain unchanged, such as reduced wait times for attractions, treat trails, and permission for adults to dress up. The one additional perk was free snacks (popcorn, ice cream, and bottled beverages) consistent with Disney After Hours (which are non-holiday events offering shorter queues for an additional fee).

Last year, there were no after-hours Halloween events due to COVID-19. Instead, Halloween offerings merged into regular hours: festive cavalcades, themed character appearances, and the chance for adults to wear costumes in the park. This makes the transition to Boo Bash seem a bit pitiful, as many of its paid experiences were free to regular park guests just a year ago.

While it may seem like COVID-19 is to blame for these disappointments, it is not. On the opposite coast, Oogie Boogie Bash returned to California Adventure at the Disneyland Resort. The paid, after-hours event debuted in 2019, but was put on hold for 2020 due to the pandemic.

This year, it returned and maintained its five-hour timeslot. Similar to Boo Bash, it offers treat trails, a chance to dress up, and Halloween-themed entertainment. Unlike Boo Bash, this event is well-rounded, offering a full-length parade and an abundance of characters throughout. Guests can interact with a variety of villains, from the Evil Queen to Agatha Harkness.

Currently, California and Florida have similar vaccination rates (respectively, 58% and 56% are fully vaccinated, while 71% and 66% have received at least one dose). As such, one can only speculate as to why their offerings are so different.

Boo Bash tickets start at $129 and go up to $199. For reference, a one-day park ticket starts at $109, which is required to even purchase a Boo Bash ticket.​ This means that you get less time in the park for a steeper price. The limited nature of the ticketed events, however, means that you can accomplish more in a shorter period of time.

While it may seem like I am not a fan of Boo Bash, I would rather have this event than nothing. I enjoy dressing up in Disney-inspired costumes, so I appreciate the opportunity to engage in the festivities.

At this point in time, Boo Bash tickets are sold out on their website. If you already have tickets, that is great––I hope you have fun. If you do not––I would not worry about it. Hopefully next year there will be an improvement.

Have a differing opinion about Boo Bash? Send us your responses. We want to hear your voice.