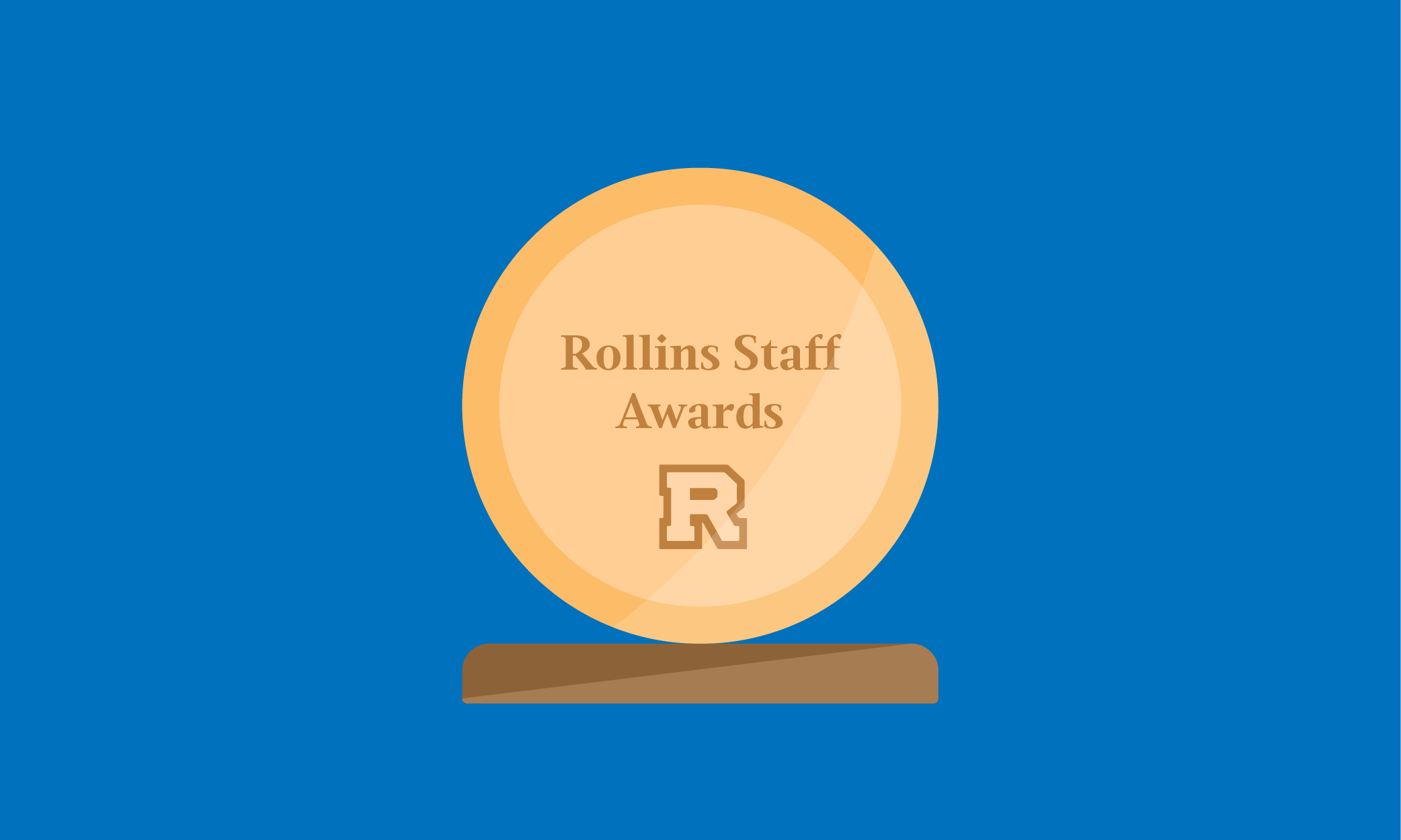 Six staff members gained recognition for their outstanding work on campus during the Rollins Staff Awards on Oct. 20.

Along with a title, award recipients received cash prizes, donation opportunities, trophies, plaques, or other honors.

Denisa Metko, recipient of the Helen Crossley Distinguished Service Award, noted the importance of recognition at Rollins: “My work is an essential part of my identity and how I show up in the world. This award, in a way, makes me feel ‘seen’…It is uplifting to know that your efforts have indeed positively impacted the community you love and serve.”

Other recipients expressed similar sentiments. Below is a focused view of each category and the impact awards made on recipients’ perspectives on work, comradery, and service.

The Helen A. Ward Crossley Distinguished Service Award for Staff was established in 1999, recognizing staff members for their outstanding service and dedication. The award is granted annually to a member whose contributions have demonstrated extraordinary customer relationships, high quality performance, creative innovation, and teamwork.

The award is named for Helen Crossley, who worked at Rollins for 59 years and throughout the administrations of five Rollins presidents.

According to the Staff Award script, Metko’s colleagues know her to be “one of the warmest, most welcoming, and thoughtful professionals around,” “an advocate for all students,” and “a fountain of wisdom, compassion, and knowledge.”

Throughout her time at Rollins, she has served the community through roles at Olin Library, Human Resources, and the Center for Career & Life Planning (CCLP). She has also collaborated with and supported many initiatives outside her job description.

Metko’s involvement with Rollins began over 13 years ago when she started as a student. Upon accepting the award, she was presented with $1,000 and a personalized trophy.

Metko expressed immense gratitude for the award and said that it is a reminder to keep improving: “I have been in a ‘doing’ mode for quite some time, and that won’t change necessarily. What I need more of, and this award serves as a reminder, is to be more intentional about carving out time and creating spaces to reconnect at the human level. In my opinion, the Rollins magic is indeed in the relationships and our community.”

Metko was chosen for this award by the SET.

The award is named in memory of Galen “Doc” Gallup, who served as Rollins’ Post Office Supervisor from 2006 to 2016. Although Doc lost his battle with cancer in early 2020, the memory of his good nature and special approach to serving others will continue to be a source of inspiration for those whose lives he touched.

The success criteria for this award includes high-quality service to internal and external college stakeholders, representation of the service excellence pillars, innovation, and teamwork.

The SET attributed all of these qualities to Whetstone, who has served Rollins for 27 years. Prior to his current role as the Student Outreach Coordinator for CICI, he served within Campus Safety. He is also the long-time advisor for the Black Student Union.

“Rollins has given me an opportunity to work with students who want to change lives and make dreams come true,” said Whetstone.

Whetstone was selected by the members of the SET.

In addition to the Doc Gallup Award for Service Excellence, Whetstone won the Thaddeus Seymour Staff Award for Community Engagement. He was the only staff member to win two awards this year.

The Thaddeus Seymour Award was established in 2006 as a means of recognizing staff members for exceptional local and global service. Thaddeus Seymour was Rollins’ twelfth president in 1978.

In the award’s announcements script, colleagues called Whetstone “an embodiment of the words ‘life is for service’” and a person who “goes above and beyond to model the way for our students through his commitment to the immersion program.”

“I just love helping others; this is something I learned from my mother as a young child,” said Whetstone. “She was a very giving person, always looking out for others. We didn’t have much, but our home was the one on the street where everyone came and could always enjoy a good meal.”

In honor of Whetstone’s recognition, he was given $500 to donate to an organization of his choice.

Whetstone was selected by a committee chaired by Meredith Hein, director of the Center for Leadership and Community Engagement (CLCE). Other members of the committee included Micki Meyer, Lord family assistant vice president for Student Affairs, and past recipients.

Presidential Award for Diversity and Inclusion

The Presidential Award for Diversity and Inclusion was established in 2010 in order to recognize staff who best exemplifies the principles and ideals of diversity and inclusion.

Criteria for this award includes advancing diversity awareness within the Rollins community and serving as an advocate for minorities.

Fitchett has been called “a source of strength for all staff and faculty” and is said to “consistently lead in diversity and inclusion and have the respect of so many on campus.” She works closely with underrepresented students to remove and overcome barriers for graduation, connecting them to mentors and offices on campus.

“It’s an encouragement to continue engaging and collaborating with others to promote equality for underrepresented groups,” Fitchett said. “Additionally, my interactions with the majority is equally important to affect change.”

Fitchett was chosen by the members of the Diversity Council.

Vocks has been described as a person who ensures that “morale remains high in the library.” She organizes social functions, makes goody bags for the student workers, and “always looks for ways to maintain our mental wellness.” She is also an advocate for Rollins’ facilities staff, teaching them English as a second language in her spare time.

Upon accepting her award, Vocks received a personalized trophy and a $150 gift card.

Vocks said, “Olin isn’t just a building, it’s a home-away-from-home for our students … I do this because I want to be a source of positive support and encouragement, even in the smallest way. Olin Library would not function without each and every member of the team and I am happy to be a part of that team.”

Vocks was chosen for the award by the Wellbeing Committee.

Awarded to Instructional Design and Technology

The Service Excellence Department Award was established in 2011 to recognize a department or team that consistently delivered excellent customer service to members of the Rollins community. The recipient must embody the four cornerstones of Service Excellence: responsiveness, respect, collaboration, and competency.

The Instructional Design and Technology Team spent 2019 piloting and transitioning all of campus to Canvas, a new Learning Management System. It was soon hit with another challenge: COVID-19 necessitated a swift move to a remote, synchronous learning environment. The team created guides, hosted trainings, and responded to calls and emails by the hundreds.

For their efforts, the team received a plaque for their department and the honor of hosting the Service Excellence traveling trophy for the next year. In addition, the SET will host a thank-you event for the team as soon as it is safe to gather.

According to the event script, the speaker said, “Without the expertise and dedication of this department, Rollins could not have continued to deliver on our mission this spring and beyond.”

The Instructional Design and Technology team is made up of Amy Sugar, Brooklynn Lehner, Scott Bokash, and Leila Haddad.

Their award was determined by the members of the SET.