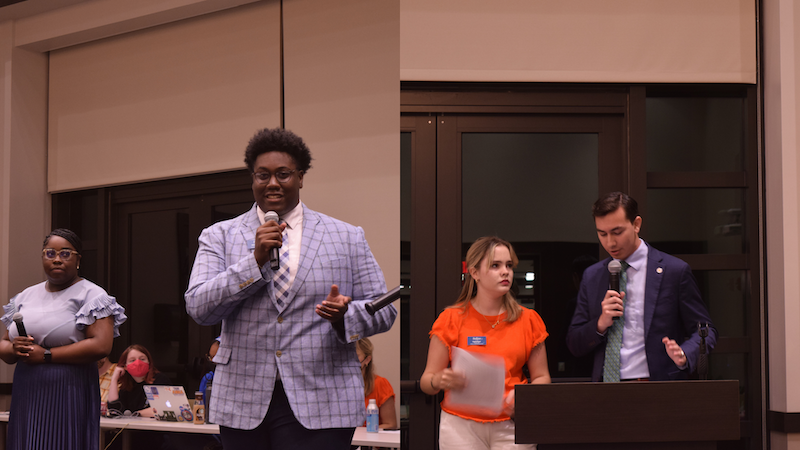 The Student Government Association (SGA) held its first in-person presidential debate in three years. The debate took place on March 4 at 6 p.m. in the Galloway room of Kathleen Rollins Hall, and it featured 45 minutes of pre-generated questions, followed by 10 minutes of student questions and six minutes of closing statements.

Incumbent SGA president Daniel Elliot (‘23) and Ingrid Ryan (‘24) are running against incumbent SGA Vice President Akheem Mitchell (‘23) and Sendy Sejourne (‘23). As per the rules of the debate, Elliot and Mitchell took turns answering questions first, after which Ryan and Sejourne followed.

Candidates were asked to address how they would make Rollins more accessible for students, including addressing hate and bias incidents, which Campus Safety shares campus-wide according to the Jeanne Clery Act.

Elliot said he believes that there needs to be reform to the timely notification system so that students receive alerts of bias incidents quicker. He added that an academic Diversity, Equity, and Inclusion (DEI) competency is needed so that all students have at least a basic education in issues like systemic inequality.

Ryan emphasized that “actions speak louder than words” and said that the actions her potential administration will take will impact future students.

Mitchell spoke to his direct experience with the “discrimination and prejudice […] that happen to [Black students] and are directed to us on this campus.” Mitchell and Sejourne both spoke to the issues of institutionalized racism and the need for accountability in order to see progress.

“For the Mitchell and Sejourne administration, words speak louder than actions […] Instead of waiting for the hate crime to happen […] we need to start holding students accountable in class when they make these derogatory comments,” Sejourne said.

Both campaigns were asked what they thought the top three issues were at Rollins. The general themes discussed were DEI; financial wellness and transparency; and student wellness and mental health.

Elliot said, “All of our platform points are rooted in [the idea that] our campus needs to be inclusive, and it needs to be equitable for all our students. […] It is expensive to go here. We need to be better about our finances, and more importantly we need to stop tuition increases.”

Ryan added the need to create more resources “other than Title IX, the Center for Inclusion and Campus Involvement (CICI), and Lucy Cross” to address issues on campus.

“There are still plenty of […] timely notifications that you see in your email that are quite scary,” Ryan said. “When I am walking home at night from late-night studying, I feel nervous about going back to my dorm.”

Mitchell used his time to emphasize the importance of supporting students from diverse backgrounds.

For Sejourne, the issues that Rollins faces are weeds in a garden, referring to an analogy made by Mitchell earlier in the evening. After further discussing retaining BIPOC students at Rollins, she discussed other topics such as mental health.

“I think everyone deserves the chance to have a mental health day […] one, two, even consecutively, but that doesn’t mean you should be punished for it under attendance policies,” Sejourne said.

Multiple questions addressed how this year’s election was unique because it was between two incumbent candidates.

When Zoe Pearson (‘22) asked the candidates about their experiences serving in executive positions, Mitchell emphasized his work advocating for diversity, equity, and inclusion: “I am the first Black person to be in one of these two positions [President or Vice President], so it was my biggest goal once again to use my position […] to provide resources, initiatives, and a better campus for those people who look like me or relate to me.”

Elliot said that Mitchell was “a great vice president, and a great number two, but I can’t think of a time where […] he’s taken a stand on something. The initiatives that we’ve worked on, I’ve been at the forefront because I know the challenges that we face.”

Elliot continued, “I’m proud that we have created a dialogue between our students and administration […] I’ve been at the forefront [of every issue we’ve taken a stand on] because I know the challenges that we’ve faced, I know what needs to be done.”

Mitchell responded to Elliot’s statement by saying, “Me being the first Black vice president, the first Black person in this position is enough to stand on. Because the pressure that comes with being a Black student on this campus, it’s more than enough. And a lot of students within this room won’t be able to understand how it feels, so me […] continuing to show up every day within this position shows that I stand firm.”

Elliot and Mitchell were then asked why they chose to run against each other this year after serving together. Elliot’s response pointed to Mitchell: “That’s a question for Ahkeem. I’ll speak personally. I’ve been very loyal to Akheem. I think loyalty and trust and respect is a mutual bond. We work very well together and he’s been a great partner and a great VP […] I offered to flip the ticket and support him and help him get the presidency. I think it’s important for someone to have a good foundation behind you, a good number two that’s going to be there to support you all along the way that knows what they are doing without overstepping […] [Running separately is] something that I don’t see as very open and transparent and [it] violated a sense of loyalty.”

Mitchell responded by clarifying his views on how a presidential and vice presidential team should work: “I don’t see Sendy as a number two. This is a partnership. Meetings I’m in, she’s in. Where I go, she goes. We have conversations. We talk to each other. We are there for each other and we support one another because there might be times where I’m not fully aware of the situations that are going on […] I don’t see it as a violation of loyalty because at the end of the day, I felt like it was my time.”

In their closing statement, Mitchell and Sejourne repeated their campaign slogan, “breaking barriers; building a future.” The duo promised to make sure students feel welcome and invited, and emphasized their desire to lead as the first minority-full campaign since Rollins’ inception in 1885. “We have the boldness to step up and show Black people and BIPOC people are deserving of these positions,” Sejourne said.

Elliot and Ryan used their closing statement to emphasize the importance of relationship building, expressing their desire to continue using the strong relationships developed with the administration over the past year to advocate for reform and student interests.

“We want to focus on the different perspectives around campus, because without that we are nothing,” Ryan said.

Elliot also used his final speaking time to address comments made by Mitchell during the student Q&A. He said, “I’m not attacking my opponent, I’m just giving an honest answer. […] I have offered every opportunity to be a part of every single decision, every single meeting. I’ve offered chances to lead, and on most occasions those chances haven’t been taken.”