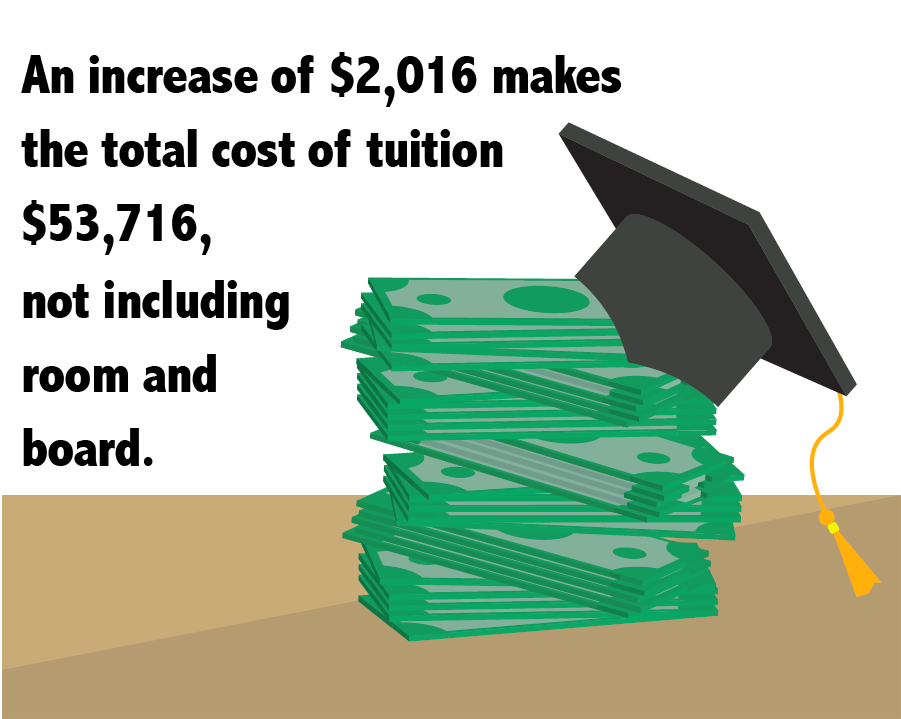 Following the announcement that tuition will rise an additional $2,016 for the 2020-2021 term, student-led campaigns and Student Government Association (SGA) initiatives are pushing for a more financially transparent relationship between administration and the Board of Trustees. Students and SGA are also calling for a tuition freeze for each student’s four-year commitment to Rollins.

Due to tuition now totaling $53,716 (not including room and board), SGA unanimously passed legislation on March 4 in support of a tuition freeze, which was endorsed by students.

A tuition freeze ensures that incoming students’ tuitions will stay the same throughout all four years.

SGA will vote on the second wave of legislation on March 25 and will push for financial transparency, such as complete access to Rollins’ budgeting process and timely notifications of increasing tuition and fees.

SGA Senators and students who support a tuition freeze want incoming Tars to know what they will pay throughout their college careers and be empowered to make responsible financial decisions.

The act requests access to all meetings between the Board of Trustees and Department of Finance, which decide tuition and budgets between July and October for the next academic school year.

The next bill, written by senators Kyle Bennett (‘21), Matthew Schultz (‘23), Wisly Zephir (‘22), and Julie Bennie (‘23), passed a resolution to affirm the position of SGA in support of a tuition freeze.

This new legislation includes a move for SGA leaders to send a letter communicating the resolution and SGA’s official stance to President Cornwell, the Board of Trustees, and the appropriate administration.

Elliott said, “If a large public university can do that, then Rollins should at least make the effort and work with students to try and make that a reality.”

Florida is one of 14 states that has implemented a cap or freeze on in-state undergraduate tuition for their public state schools. As of July 2014, rates in the public university system have not increased, including at the University of Florida and Florida State University, who were the two schools allowed an increase of up to 6% a year.

Last Wednesday, SGA also held a demonstration to save the Effective Access to Student Education Program, also known as EASE (formerly known as the Florida Resident Access Grant, or FRAG). The demonstration took place in the CC in partnership with Stetson’s SGA.

EASE is a program that provides assistance to undergraduates at private institutions in Florida, and it is in danger of being cut by more than half in the 2020-2021 term.

An online petition for this cause has nearly reached its signature goal to request Florida legislators to maintain the funding. However, increasing tuition and decreasing financial assistance is a foreboding reality for many Rollins students.

Students are troubled by a lack of access to the school’s budget, a confusing financial process, and a lack of representation at decision-making levels such as the Board of Trustees.

The Department of Finance, the Office of Financial Aid, and the Board of Trustees are all pieces in the process of creating the school budget and deciding when and by how much to increase tuition.

A speculative tuition increase was included in a working budget as early as October. However, Rollins’ full budget for 2020-2021 will not be finalized until the Board of Trustees votes in May.

Steve Booker, associate director and vice president of the Office of Financial Aid, describes how the office is involved in the decision to raise tuition.

Although the office is part of the budget process that includes tuition, there are many “moving parts,” Booker said. By October, the office receives initial budget information “based on the costs that we know are increasing.” These costs, Booker said, can come from increased health care fees and other expenditures associated with faculty and staff.

When asked what factors decided the tuition increase, Associate VP for Finance & Assistant Treasurer Bill Short said that costs of residential halls and meal plans have remained static for five and seven years respectively. In addition, “requests for new initiatives and services to enhance the student experience escalat[e] costs like any business,” Short said.

The residential and meal pricing numbers that influenced the most recent tuition increase in the working budget were unavailable.

Elliott is looking forward to the next wave of legislation, the Budget Accessibility Act, which will be voted on March 25.

“The principle behind this is that people should have the right to know where their money is going,” Elliott said. The bill addresses the lack of an official process for students to be involved in budget details, like those that decided the tuition increase.

As a private institution, Rollins funding does not come from the state; instead, it comes from donations, endowment, and tuition.

When a student wants to know how their tuition is being spent, “there’s a general sense that no one can give a straight answer,” Elliot said, adding that there is no online database or other way for members of the Rollins community to see the college’s budgetary decisions.

“We’re relying on fifteen different answers, whether that’s intentional or not,” Elliott said.

In a Forbes article that analyzes institutional finances, titled “Dawn Of The Dead: For Hundreds Of The Nation’s Private Colleges, It’s Merge Or Perish,” Rollins was graded at a C+, meaning it qualifies as a “tuition-dependent school.”

Since last year, a group of student activists have been questioning how Rollins is supporting their low-income students as tuition rises.

In Fall 2019, Wyatt Deihl (‘21) shared a Facebook post about this, wishing to bring students together to protest the treatment of low-income students.

He told The Sandspur last semester that he “hopes to change the discriminatory policies at Rollins College that are not conducive to the success of low-income students and those that create unnecessary barriers for low income students.”

These students organized a meeting last month to discuss reasonable tuition and voiced concerns about their ability to afford the most recent increase. Some shared personal experiences with the unclear financial process and their reliance on balanced financial aid.

Some students felt alienated by the lack of explanation in the financial aid letters that announced the increase.

Jacob McCree (‘23) said, “What would help us is having a very clear understanding of where the money is going.”

The sentiment was echoed by Deihl: “We need a transparent financial aid process and transparent budgeting process,” he said.

A popular idea among these students, and one legitimized by SGA on Wednesday, is the notion of a tuition cap, or freeze, for returning students.

It is a persoal topic for Elliott, who believes his own and other concerned students’ experiences with financial information has been misleading.

Regarding students who need the most help over the tuition increase, Booker said that financial aid forms can be filled out as early as Oct. 1.

In addition, students should not only fill out the financial aid form and FAFSA, but “come in and talk to us. There’s something called special circumstances, so things happen in a student’s life; parents might get a cut or change in income. We want to help out when we can. We can work with students on that. We want to have those conversations,” Booker said.

Elliott is also interested in another initiative, one that could place a student representative on the Rollins Board of Trustees.

“Maybe not with voting power, but someone that’s there, representing and debating on proposals on behalf of the will of the students and their needs,” said Elliott.

A student included in the Board of Trustees meetings could give the student body more influence in the financial decisions of the college. This is not an uncommon practice at other private institutions, such as Tuskegee University.

Elliott has hope in the support of the student body: “Gathering support from as many students as possible is so important. When administration sees that is a big issue, this is something that a large gathering of students on campus believe is a big issue, and support, that something can be done,” he said.

The Instagram account @rolly_tuition, with over 250 followers, is promoting March 12 as Won’t You Be My Neighbor Day, asking those in support of fair tuition and reasonable housing prices to wear red.

After meeting at Mills Lawn at noon for a demonstration, supporters will participate in an open forum at the Office of Student Affairs at 12:30 p.m.