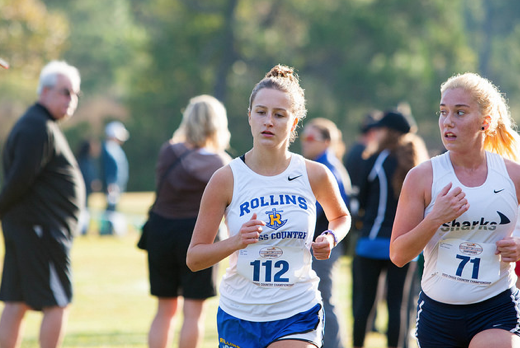 With a new coach, cross country has high hopes

It’s the night before a race and the men’s and women’s cross country teams convene in the Alfond Sports Hall for a pasta dinner, a tradition newly-introduced by interim Head Coach Nate Weyant.

The team talks, shares a meal, and starts mentally preparing for their race in Melbourne the next morning. It paid off, as nearly every member of the team dropped in time during the race.

The Sept. 8 Florida Tech Invitational started with the men’s team. In the 8k, Ryan King (‘21) registered the best time for the Tars with 32:01, placing 46th.

“Pretty much everybody dropped time, significantly for some of the ladies. I think that’s indicative of how hard they’ve been working training-wise. Overall, I am very encouraged by the result today,” Weyant said.

Both teams have been training intensively, with their first meet coming only four days after the start of classes, a situation Weyant described as “grueling.” Given the nature of the Sunshine State Conference, competition varies by the size of the different schools.

This past weekend’s meet had a different course nature as well, using laps rather than a distinct start and finish.

In the experience of Weyant, some of the contestants prefer one to the other. “Different mentalities, different thought processes,” Weyant said.

Katie Rioux (‘19) has had her fair share of experiences. “It depends on the schools that show up; the courses are different, too. Some have more hills, some go through the woods. Some have more concrete or gravel. It just depends on location,” she said.

She elaborated on her ambitions and motivations, saying, “I want to push myself this year, to work harder than I have in the past. The atmosphere in the group is really friendly. This has been my favorite year so far.”

The cross country season is short, with only six meets in total. According to Weyant, the FLrunners.com invitational in Lakeland on Sept. 28 stands out.

“It is at the same course that we ran on Sept. 1, with similar weather and fairly similar rivals. That will serve as a measuring stick to show how much we’ve improved in the meantime,” said Weyant.

The cross country team is mixed with athletes from other varsity sports, using it as a training tool to get in shape before their other season begins. Smith and Meehan are on the baseball team, whereas Nicole Hubert (‘19) is using the rowing off-season period to prepare for both cross country and her own half-marathon plans.

Echoing the words of Rioux, Hubert was full of praise for the new environment created by Weyant. “I think the team is awesome this year. The coach has done a really incredible job of making sure he’s holding everybody accountable in a new way by offering two different practice times a day, working with everybody around the schedule, making sure everybody in the team feels like they’re a real part of the team, which is a very different atmosphere than the one we’ve had in previous years.”

Huber cherishes the community feeling that has been created. “Of course improving personally is important,” she said. “But more than anything, a lot of the people I am running with are people I have been running with for the past few years. It’s good to see those friendships progress and see them beat their goals too.”

Both Weyant and the team are appreciative of the expertise provided by Assistant Coach Whit Wismar. Hubert said, “He knows the courses really well and knows what kind of training we need the week before, to best prepare. For Holloway Park in Lakeland, Whit knew that we needed to do a hill workout so we could prepare mentally and physically.”

By designing workouts to match the racing conditions in upcoming weeks, Wismar ensures that the Tars are never caught off-guard. “After all Winter Park isn’t exactly the hilliest place. He finds innovative ways to get those workouts in and preparing us as best as we can,” Hubert said.

Coach Weyant, who has been involved with Rollins Athletics for 15 years now, finds the experience overwhelming, but worth it. “It’s been like drinking out of a firehose, that’s the best way to put it. Balancing the administrative requirements, the actual training and my other job of being Assistant [Athletic Director] of Communications all at once–it’s been great,” he said.

The team is happy with their new coach, and the sentiment is mutual. “I’ve been kind of on the outskirts, watching them, supporting them,” Weyant said. “But it’s an honor to be their coach this year.”