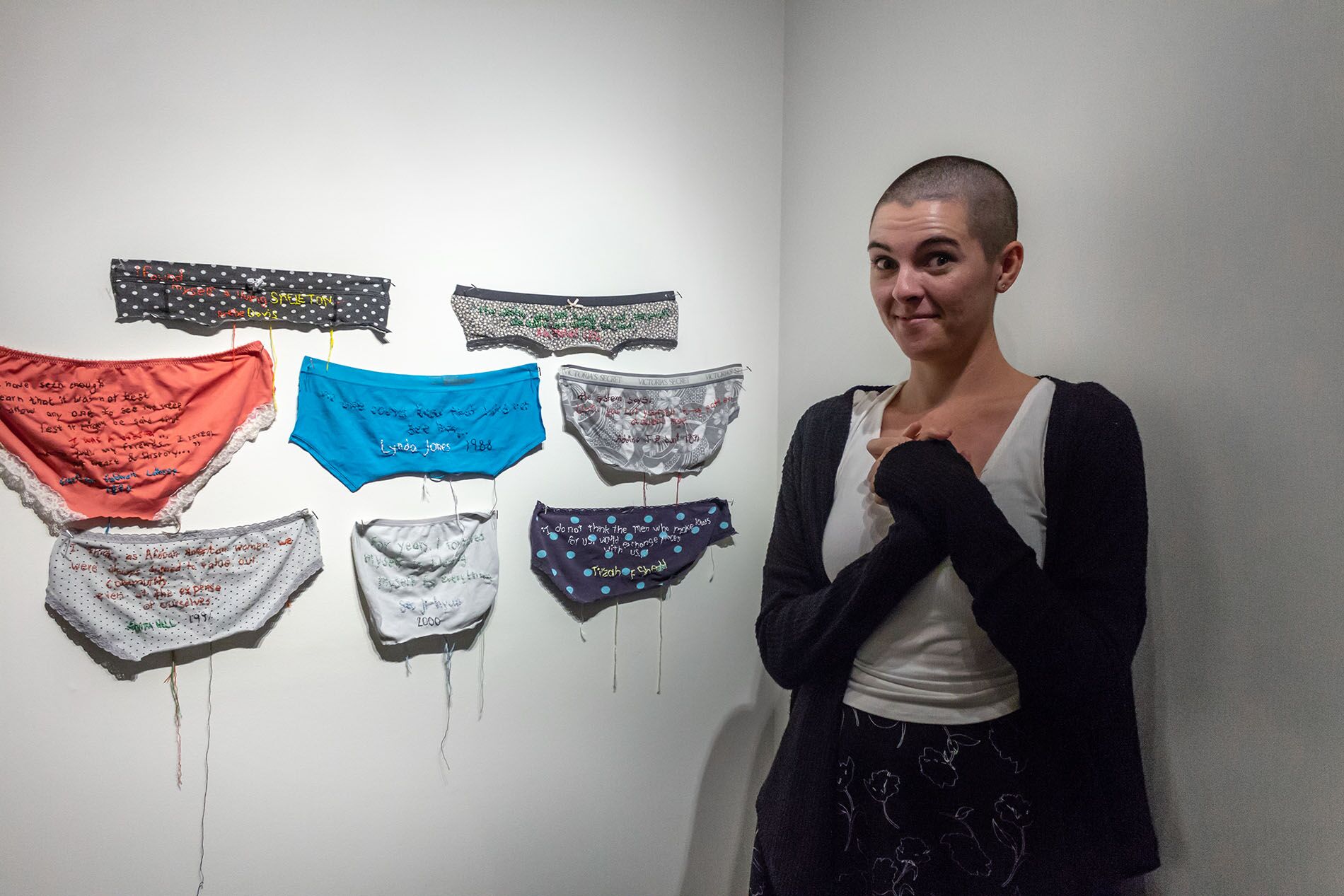 Content Warning: This article discusses sexual assault. Please know that there are resources available to you, such as the Wellness Center and Office of Title IX, which is located in Dave’s Boathouse.

As people go about their day, they may not think much about the undergarments they are wearing. For survivors of sexual assault, however, these garments can be painful reminders of their harrowing experiences.

That is why Meredith Ewen (‘19), a studio art major and programs intern at the Office of Title IX, decided to use bras and underwear from survivors to create an art project that helps survivors tell their stories. Ewen’s “Voices: Beyond the Walls” project and her “Dear Survivor” letter project show that artistry and advocacy do not have to begin when students graduate. They can start here and now.

As a sexual assault survivor herself, Ewen has noticed that survivors have an odd relationship with the undergarments that they were wearing at the time. “Some of us hold onto it, [some] get rid of it immediately, and some of us look at it from time to time,” said Ewen.

She recently created a website, voicesbeyond.net, to display each embroidered undergarment. The website also provides a citation to the survivor’s story or a resource in collaboration with their identity group.

At Ewen’s initial exhibition during the senior showcase at the Cornell Fine Arts Museum, Ewen saw the impact of her work in how each person chose to engage with the project. She said some casually glanced at it, while others actively avoided it or stared it down. “This forces the viewer to be vulnerable in a different way,” said Ewen.

Prior to her senior showcase, Ewen’s original goal was to collect 500 undergarments on Mills Lawn to represent the amount of students who are likely to experience sexual assault before they graduate college.

When Ewen only received 300 undergarments, she did not give up hope. Instead, she turned the undergarments into yet another beautiful and empowering project.

“What would it be like if we were to claim this object in a way that was defiant and also honoring people before us and creating a future that we want to have?” Ewen asked.

Ewen’s purpose for creating the project is to ask the question, “How has that experience impacted these people?” Through this project, Ewen wants to validate and accept each person’s story and experience, as well as continue the conversation about how it impacted them.

“I wanted to present a space where the evidence wasn’t a rape kit or photographs or bruises or scars or any of that. The evidence was their stories,” said Ewen.

Throughout this journey, Ewen has realized that advocacy and inclusion are active processes. Ewen looks at and honors as many various identity groups, voices, and experiences as possible.

“All of these things represent people who may or may not feel like they are listened to,” said Ewen.

“Everyone who has a story to tell gets to decide what to tell, who to tell, when to tell, and it is ultimately their decision,” said Ewen. She said that she has realized the importance of listening to and telling diverse stories that offer different perspectives on trauma, pain, and isolation.

This process has been both a healing and learning experience for Ewen. Through this healing and empowerment, Ewen has learned that this is “not about right or wrong or fitting into a box about what a survivor looks like or what your experience was.” Instead, she said, it is about honoring each person’s experience and realizing what the community can do to help each survivor recover.

Ewen launched another project on her website titled “The ‘Dear Survivor’ Letter Project,” where viewers can engage with “Voices: Beyond the Walls” by thinking about how they would respond to a survivor if they had the time to truly think and process their experience first.

Ewen’s project continues into the spring semester and well into the rest of her life as both an advocate and an artist. When the  Department of Art and Art History asked Ewen how many embroidered garments she would make, Ewen boldly responded, “I will stop sewing when there are no more stories left.”

Therefore, anyone is encouraged to donate undergarments to the department to allow Ewen to continue telling these stories, which are key to the healing process. Although this is primarily targeted for survivor donations, anyone can donate.