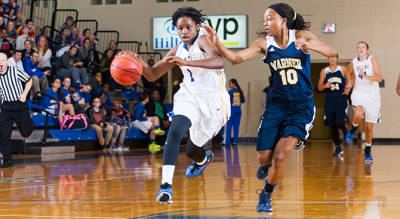 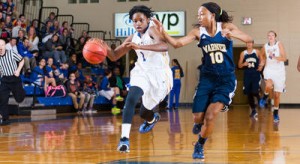 The year was 2008. Following a two-day hospital stay, Tanaya ‘Tee’ Jones ‘17 received news that she had sickle cell trait soon after playing in the Lockhart Middle School basketball tournament.

“I couldn’t breathe, I felt nauseated, I kept drifting off, and was in panic,” says Jones. “My mother rushed me to the hospital where I received a blood transfusion and several tests.”
Upon learning this information at age 12, the first question Jones asked the doctor was whether she could continue to play basketball. She explained that she was afraid when she was diagnosed.
For those unfamiliar with the sickle cell trait, the sickle cell gene is inherited from a parent. As humans, we all have hemoglobin. This protein is found in red blood cells, and carries oxygen from the lungs to the rest of the body.
A person with sickle cell trait has one abnormal, ‘sickled shaped’ hemoglobin, which causes lower oxygen intake for the body.
Fortunately for Jones, her doctor recommended moderate eating, less playing time on the court, and to maintain full communication with coaches and trainers.
She graduated from Evans High School in Orlando in 2013 and is on a full athletic scholarship with the women’s basketball team. She had to learn to push herself to limits, while recognizing when her body needs rest.
The cards were certainly stacked against Jones in her freshman year. It was “very hard to get used to the system, the workouts, and the training,” she shared. “Luckily, the training staff, coaches, and teammates were fully aware of my condition and supported me throughout this journey.”
And a journey it has been for Jones; she received ‘freshman of the year’ honors. In the same year she made it to the All-Newcomers Team for the Sunshine State Conference, and she was one of the leaders in the league fo number of steals.
Jones is both a mentor and a source of encouragement for her little brother and sister. Instead of allowing her condition to control the rest of her life, she embraced its challenges.
“I do not let sickle cell trait control what I do in life, I put all my trust in the Lord and live through his word,” said Jones. She continues as the Lady Tar’s point guard here at Rollins College, now in her sophomore year.