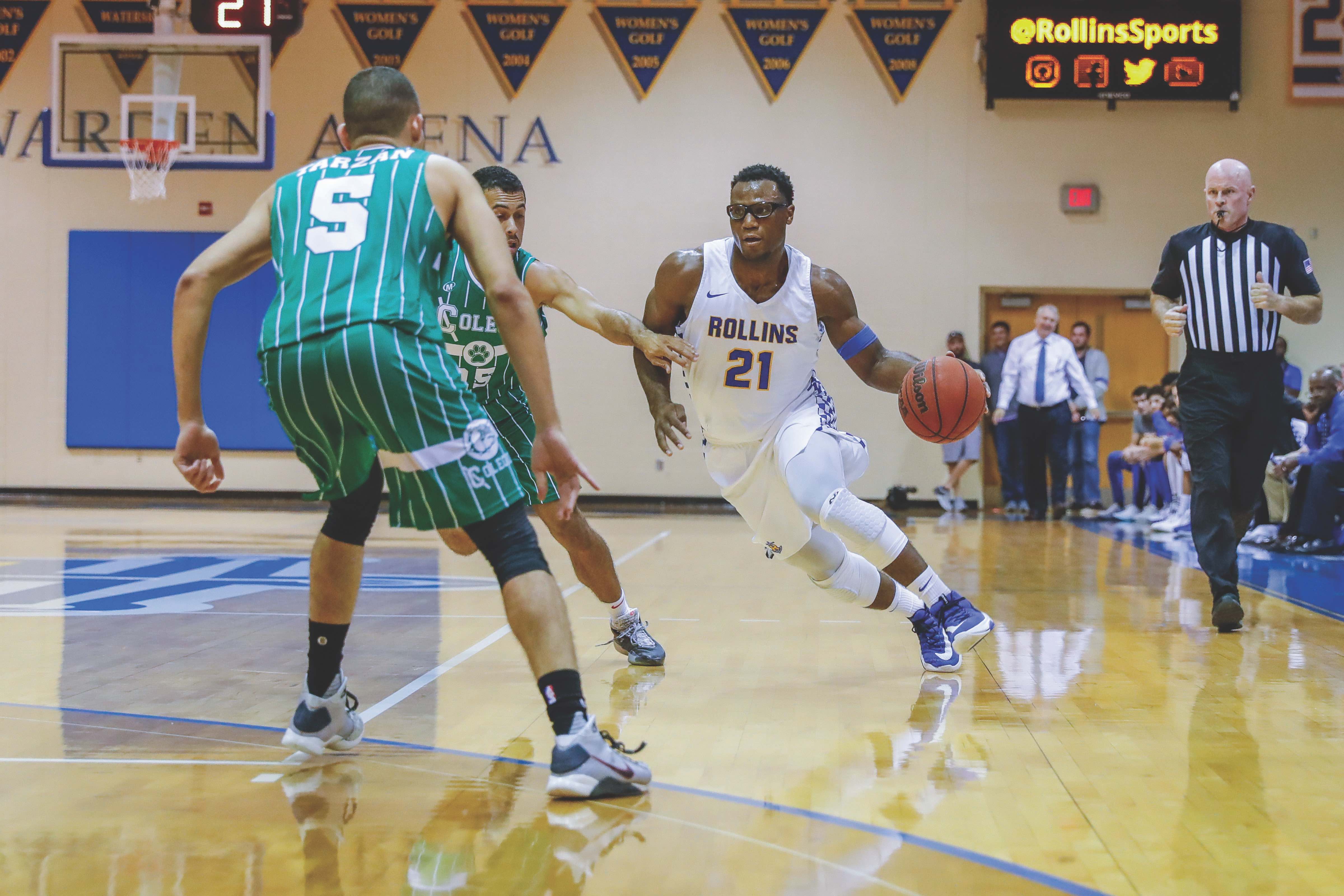 Excellence and mental fortitude have defined Jakobi Bonner’s (‘20 ‘21MBA) years at Rollins, both on and off the court. After attaining 1,000 career points, he is looking forward to signing off his senior year in style.

While the Men’s Basketball team was handed a frustrating defeat on Saturday against Eckerd, Bonner was motivated to push harder.

Bonner said, “Any loss, any failure, whether in basketball or life in general, is a learning lesson. It’s a matter of watching the film and getting after it in practice the next day, which is going to be our main priority. The greater teams do that.”

Despite their loss, the Tars turned heads this season by beating two nationally-ranked teams, including No. 1 Nova Southeastern. Bonner scored an impressive step-back jumper with 3.7 seconds left in the game and was subsequently chosen as Sunshine State Conference Player of the Week.

“It was exhilarating. Especially, as a team, you can see the work that you put in,” said Bonner. “It motivates you and it gives you a little bit of confidence and swagger to be able to go into other games with the mindset that you’re going to win no matter who it is.”

With a mentality like that, it is not hard to see how Bonner went from missing half of sophomore year due to injury to leading the Tars with 14.6 PPG last season, where he started 27 out of 28 games and had double digits in 25 of them.

Bonner reached 1,000 career points with his first bucket of the game against Palm Beach Atlantic two weeks ago. Though proud, individual achievements come second to teamwork in his book.

“Obviously, I want to be able to work hard and prove that the work I put in is evident. However, if we don’t win, that means nothing,” explained Bonner, whose sole individual goal is making sure that the team plays the best that they can.

Bonner appreciates his relationship with Coach Klusman. “He cares about his players more as men than as basketball players. I feel valued as a person, as a student-athlete, as an athlete,” said Bonner.

Between his athletic prowess, academic performance, and his work with Residential Life and Explorations, Bonner was selected as one of the three SSC student-athletes to take part in the NCAA Leadership Forum last year.

He described it as an eye-opening experience, and he still maintains the connections he built at the conference. Bonner said his leadership skills were enhanced; seeing different perspectives pushed him to be even better for the sake of his community.

When looking back on his career at Rollins, an impressive highlight reel unravels. Bonner fondly recalls winning the 2017 conference championship and regional championship, as well as hitting the game-winner to take out the number two team in the country. However, he is still hoping to add to the list this season.

The future holds many options for Bonner, and he is keeping all of them open.

A political science major, Bonner is in the 3/2 accelerated program. He will graduate from Rollins as a respected member of the campus and future generations of Tars will have plenty to learn from his legacy, yet he has one main piece of advice: hard work beats talent.

“For any athlete that’s coming into the school, or anyone who’s already on the team, that’s in a position they don’t want to be, you gotta find a way to make yourself different and push yourself to the limit. That’s what I’ve done throughout my four years here,” he said.

At the end of the day, no matter how the season ends, Bonner can be proud of himself for always giving it his all. He pushes himself to be better not only for his own sake, but most importantly, for his teammates and everyone around him.