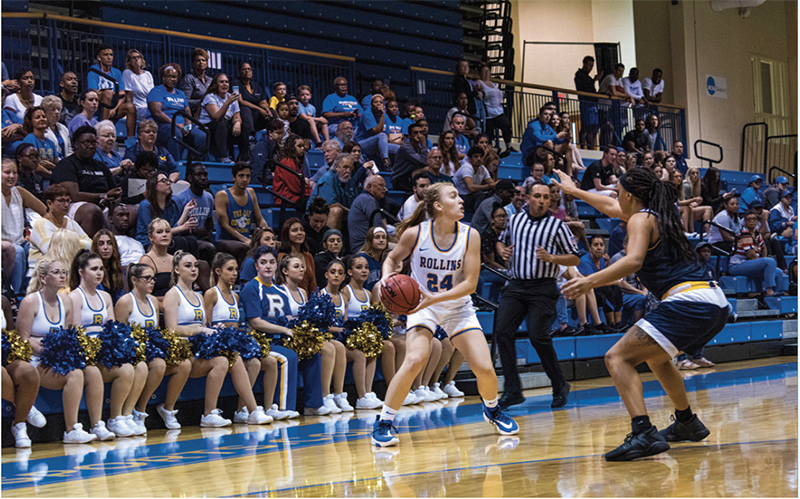 “We are way ahead of where we were this time last year,” Wilkes said. “We were really young last year so this year we are showing more experience.”

Wilkes is ready to do what it takes to achieve his goal for the season: winning the Sunshine State Conference.

“Always this time of year, you need to work on defense and rebounding. We did not block out, and our defense fouled too much, but you are always going to have that this time of the year,” Wilkes said.

Denise Daniels (‘20), the only player on the roster to play both forward and guard, played a statistically strong game with 14 points, 10 rebounds, and five assists. Rachel Lia (‘21) also held a solid game with 12 points and three assists.

“We moved the ball really well, always getting the extra pass and getting the best possible shot. We also got a lot of offensive rebounds which is something we have been working on. As a team, I think we are going to focus going forward on defensive rebounding, staying calm under pressure, and offensive movement,” Lia said.

Lia wants to refine both her defensive and offensive skills to maximize her team’s potential for the upcoming season.

“I really want to work on becoming a stronger defender as well as being more patient in our offensive plays,” Lia said.

Rachel Jablonski (‘21) and Tianna Rosser (‘20) scored 11 points each and played 37 minutes between the two of them.

Harrison said, “As a team, we need to make smarter decisions: do not rush, and relax when we are getting pressured. That will come as we keep playing. My defense needs to improve because my defense is what gets my offense started.”

Harrison is excited for this year’s season: “Our goal is to win; to win games and win the conference championship. It is time to make a statement this season. We worked way too hard during the off-season to not continue it and get any results. We are more focused as a team and are starting to realize what it takes to win games,” she said.

The Tars debuted two freshmen: Silvia Lasarte Garcia (‘23) and Angel Keiths (‘23). Since this was a preseason game, they were able to gain college-level experience before the official games start.

Wilkes is pleased with the recruits, who replaced Vernisha Andrews (‘19) and Carly McLendon (‘19): “We lost two really good players, but we replaced them adequately. [The freshmen] are young, and they are going to make mistakes, but I think we have a really solid club,” Wilkes said.

The team brought in a large turnout for their exhibition game, with students and visitors alike. “There is no better feeling than seeing a full bleacher,” Lia said.

The Tars’ final exhibition game is Oct. 28 at Daytona State College. The first official games of the season will be held Nov. 8 and 9 in Puerto Rico, where the team will compete against Rio Piedras and Bayamon.

Rollins’ first home game of the season will be on Nov. 19 against Puerto Rican team Mayaguez.