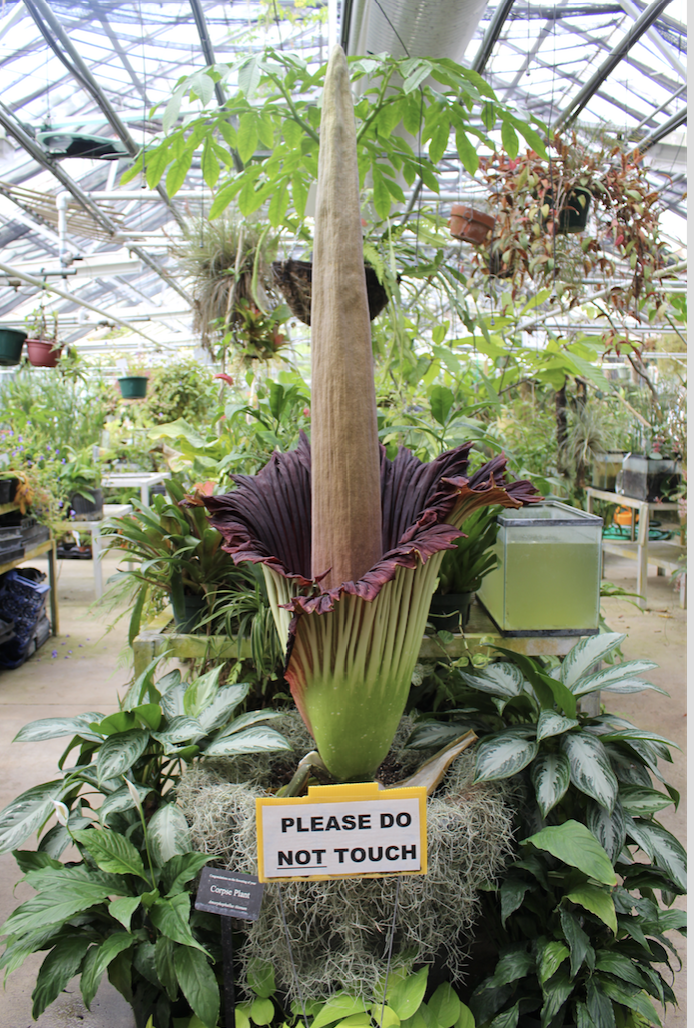 By Heather Borochaner on September 5, 2018

Within a span of 48-hours, the corpse plant went from a sealed plant (left) to a fully-opened pollination machine.
(Douglas Jackson (left) and Kira Bernhard / Staff Photographer)

If you passed by the campus greenhouse over the weekend you may have noticed a wretched scent of rotting flesh. Fear not, it was only the blooming of Racine, the campus corpse plant.

Usually corpse plants, or Amorphophallus titanums, bloom only once every 10 years, but Rollins’ has bloomed again, less than three years since it first produced a flower in April 2015.

The corpse plant at Rollins is known as Racine. “When I repotted her last month the corm [a modified stem] weighed only 19 pounds,” said Alan Chryst, the greenhouse manager of more than 20 years.

Racine only remained open for about 12 to 36 hours after it first bloomed, with her peak stench occuring in the early morning hours of Monday, Sept. 3.

The corpse plant takes so long to bloom due to its massive size and the time it takes to store the energy required to bloom. “It also produces its own heat and steam,” said Chryst. “It requires a lot of energy in order to accomplish this.”

Corpse plants only produce one leaf per year. While the leaves grow, energy is stored in the corm to build up for a bloom. “I didn’t think a 19 pound corm had enough energy to produce a flower,” says Chryst, who has read about plants that bloom when the corm weighs 100 or even 200 pounds once the flower is produced.

While the circumstances are extraordinary, Chryst does have some concerns for the plant’s safety. He fears that Racine will not have enough energy to produce another leaf after blooming again so soon, which could cause it to die.

Dr. Paul Stephenson, associate professor of biology at Rollins, said that there is not much information on why the plant may be blooming again so soon.

However, he does not see any need for concern.

“Our corpse plant had a smaller than average corm when it first bloomed and seems to be continuing this trend,” he said. Stephenson also noted one case of a corpse plant blooming three times in six years at the University of Wisconsin.

“It may be that we have an individual that will flower regularly from this point forward,” said Stephenson. “That would be really cool!”

The first human-assisted bloom of the corpse plant was in 1889 at Kew Gardens in London, and since then only 200 or so cultivated plants have bloomed around the world.

Each blooming captures the public’s fascination, and because of its rarity, thousands of people travel to the Rollins greenhouse to experience the spectacle and rotting stench.

Once the plant finished blooming, Chryst weighed the corm again. “This lets us know how much energy it used in producing this spectacular flower!”

Before it bloomed, the plant was 61 inches tall, which is taller than it was during its initial blooming.

Dr. Lee Lines, professor of Environmental Studies, is one of many who are excited about the plant’s activity. “It’s great that this plant is blooming again, so soon after the initial flowering!”