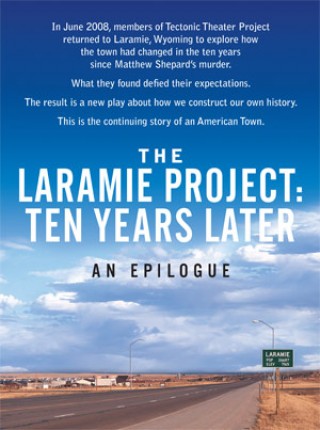 The Laramie Project: 10 Years Later was performed by Rollins College’s very own theatre department in the Annie Russell Theatre. The story of The Laramie Project: 10 Years Later followed the case and brutal murder of a handsome young man by the name of Matthew Shepard. It is almost not even a play, but a documentary in the form of acting – a docudrama.This “docudrama” opened with narrations from Alexandria Crawford ‘16, Peter Ruiz ‘15, and Crysta Anne Marie Vickers ‘15, who were dressed in shades of grey and purple to complement the set, and spoke with a strange, hypnotizing stillness in their voices. The mood was set, and from below the stage, the narrators pulled up a screen displaying the infamous notecard YouTube story of Jonah Mowry. The story of Matthew Shepard then began with September 12, 2008. Each actor was playing multiple roles throughout the play. The members of the theatre department put their soul and emotions into the production, jerking both laughter and hushed emotional reflection in the audience. It was not necessarily the lines they said, but how they said them. The production also consisted of actual footage from the 20/20 segment. This segment took us beyond the stage to remind us that a young man had been brutally tortured. The story rang out in the audience, and not only “entertained” but also educated and informed.

It cannot be emphasized enough how conviction and opinion was translated from those performing to those watching. A flash flood of truth encroaching comfort displayed the true art form that is acting. A special shout out to all involved in the production, from directors, to tech, to cast. Thank you for another excellent Annie Russell production.