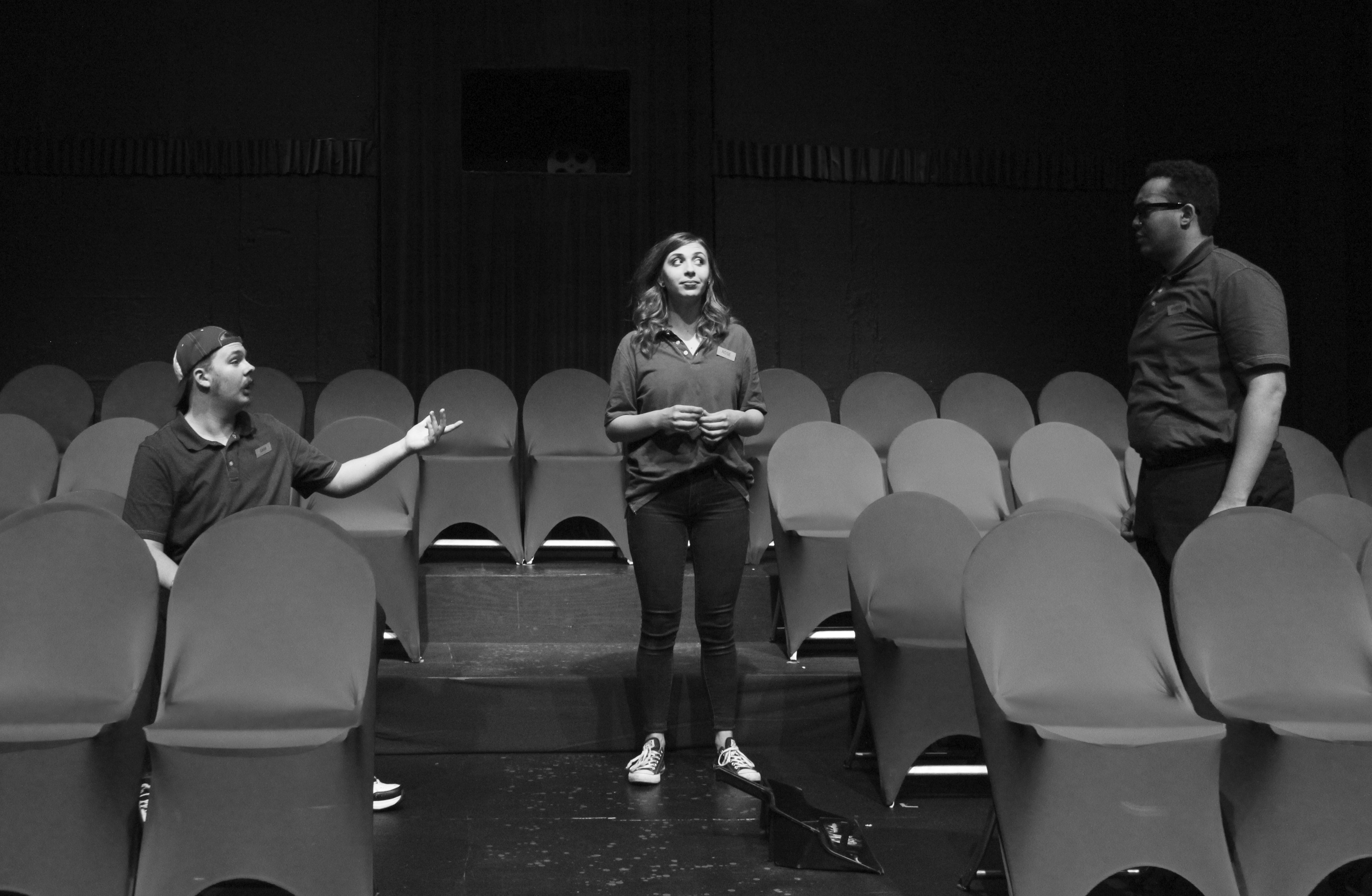 ‘The Flick’ breathes fresh air into the Fred

As a part of the Second Stage Series, Rollins welcomed The Flick to the Fred Stone Theatre.

Produced by the Rollins Players student theater organization, The Flick was completely directed, designed, marketed, and performed by Rollins students.

The Flick, written by Annie Baker, premiered Off-Broadway at Playwright Horizons in 2013. It has since won the 2013 Obie Award for Playwriting and the 2014 Pulitzer Prize for Drama.

The Flick followed the story of three movie theater employees as they sweep, mop and scrape their way through life—coping with the challenges that come with working at a run-down movie theater in central Massachusetts.

Such a simple premise is overwhelmingly misconceiving, as The Flick manages to masterfully tackle issues of love, depression, directionlessness, and just about any other problem the average 20- to 30-year-old faces in this modern age where authenticity is hard to come by.

All of this is accomplished in a comfortably realistic manner, breaking free of the cordiality and drama of the typical play to present these issues in their rawest, most authentic form.

The director, Nick D’Alessandro ‘18, explained that this is what inspired him to bring The Flick to the Fred Stone Theatre. “I fell in love with its theme of authenticity, connection and change. They’re all very personal themes and ones I feel people struggle with in private. It’s nice to have a show about complicated internal struggles where we just talk about it.”

The desire for authenticity was most critically examined through the character of Avery (Jonathan Garcia ‘20), an awkward college student obsessed with film. Throughout the play, Avery makes several attempts at examining authenticity in his own life, the lives of others, and in the film industry, presenting his views on how “immoral” it is to show films on digital projectors and how he feels as though everyone is trying to act like a “stereotype of themselves.”

Such profound moments are punctuated by moments of humor—equal parts crass and light-hearted—that give The Flick the authenticity it demands, creating a comfortable and realistic space to discuss the complicated issues it handles. However, the very thing that makes the The Flick so authentic also makes it a delicate play to navigate.

D’Alessandro explained how he faced this challenge as a director. “We know that there are things in our show that can make the audience uncomfortable and make them squirm, but it feels safer if we ourselves are comfortable with the story and the language and the choices. Establishing that space of comfort amongst the cast was a challenge, but once we made that space where we felt safe making those big choices, we knew the audience would feel safe too. It’s ensuring that we were in control of the play and that the play was not in control of us.”

This comfortable, organic dynamic between cast members was definitely conveyed, accentuating the themes of the play and pushing The Flick forward to be the wonderful experience it was. Truly, casting, set design, and lighting were masterfully conceived and executed, entrenching the audience further into the realism of the play.

It may be a long time before an experience as uniquely authentic as The Flick graces the Fred Stone Theater again. The show was performed during the week of Feb. 10.