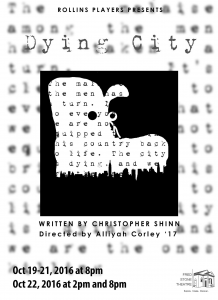 Dying City, the first of four Fred Stone Theatre productions at Rollins College this academic year, opened on Wednesday Oct. 19 and will run through this Saturday, Oct. 22.  Fred Stone Theatre showings are free to all members of the community, Rollins and non-Rollins alike, and all are invited to attend.  The other Fred Stone productions expected to run at Rollins this year are Constellations, God of Carnage, and Silent Sky.

The Fred Stone Theatre houses student-produced Second Stage Series shows like Dying City.  This means that, unlike the main stage season at the Annie Russell Theatre, the Fred’s shows are completely directed, designed, and performed by Rollins students typically completing their senior capstone.

Students might relate to  Dying City because the story revolves around key events that have occurred in our lifetimes.  The play is set around two different but directly related events: the hysteria that occurred following 9/11 and at the beginning of the Iraq War.  The drama follows a young couple, Kelly and Craig, with the play alternating between Craig’s last night at home before shipping overseas and a year after Craig’s death when his brother suddenly shows up on Kelly’s door; these characters explore how different personalities cope with PTSD and other results of war.

Alliyah Corley ‘17, the director and scene designer for this production, discusses how the themes of the play have touched her and how they can relate to other students. “I have a lot of family members and friends who have served in the military, and I’ve always been worried about them getting PTSD and how their lives would change from that.

“I don’t personally have experience with PTSD, but I do relate to other themes present in the play such as depression, unhealthy relationships, and dealing with loss.”

Corley continued, “It’s definitely been a challenge to bring such heavy material to life with only two actors, but it turned out great and I can’t wait for people to see it.  They can expect to see two student actors transform into characters completely unlike themselves and present ideas that will make you think.”