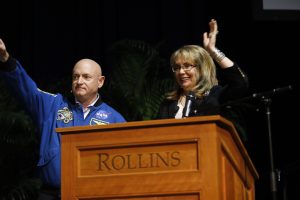 Some people are born to become heroes, while others find the title thrust upon them by pure circumstance. Former Senator Gabrielle Giffords and Captain Mark Kelly, her husband, have had to look death in the eyes on multiple occasions. In every sense of the word, they are heroes—both because of the challenges they have overcome and the accomplished lives they have led.  On April 4, 2017, Giffords and Kelly spoke to Rollins students and the Winter Park community about their journey; their talk became the latest in this year’s Winter Park Institute lineup.

Besides serving in the military as a naval aviator and then serving his country again as a NASA astronaut, Kelly proudly shared that he has more than 6,000 flight hours and is one of only two astronauts to have visited the International Space Station four times.

But, as Kelly recalled, nothing could have prepared him for the news that his wife had been injured on that fateful day on January 8, 2011. As many Americans will remember, former Congresswoman Gabrielle Giffords suffered a major brain injury as a result of a shooting that occurred during a meeting with her constituents.  Giffords sustained a bullet to her brain; several bystanders were killed.

Kelly, who had flown over enemy territory, through clouds painted orange from the sheer amount of fire and bombs being unleashed below; Kelly, who had survived four missions on space shuttles so dangerous that a single mistake could have led to a catastrophic chain of events; Kelly, who had faced challenge after challenge to accomplish his goals, was not “as it turned out. . . the one who nearly lost his life serving his country.”  Instead, that would be his wife, Gabrielle Giffords. In a matter of moments, Kelly’s whole life was turned upside down, as he found himself the primary caregiver to the individual he called on Tuesday his “personal hero and wife.”

Gifford’s story is one of the power of human resilience, the value of a strong spirit, and the possibility of rebounding from tragedy.  While media channels as distinguished as CNN and Fox News were pronouncing Giffords dead a few hours after the shooting, she was in the hospital, holding on. At the Winter Park Institute event, Kelly joked, “My wife, Gabby, was not going to get taken out by cable news.”

While Mark Kelly maintained that his wife is still the same person she has always been; Giffords would disagree: “I’m getting better. I am working hard at lots of therapy. But my spirit is as strong as ever, I’m still fighting to make the world a better place, and you can too. Be a leader. Set an example. Be passionate. Be crazy. Be your best.”  Giffords is “fighting to discover a new [Giffords]: a better, stronger, tougher” version of her former self.  Although immediate and detailed responses are difficult for people with aphasia, an inability to express thoughts through speech, Giffords was able to answer a few questions posed to her before the event—evidence of the effectiveness of physical and speech therapy.

The amount of work it has taken Giffords to come this far is immense.  But, even more amazing than her accomplishments are her optimism and hope. “Though the things that she used to find easy to do are now almost impossible or very, very hard,” her husband explained, “Gabby doesn’t give up. She reminds me each and every day to deny the acceptance of failure. . . [there isn’t] a dent in her spirit.”

While Giffords’ memory of the shooting is nearly nonexistent, she recalled one thing from January 8, 2011: where she parked her car.  Yet, when asked to give a statement to the court, her husband recalls that Giffords looked her attempted assassin squarely in the eyes with recognition of his crime, if not his face.   “Gabby wrote that she would gladly trade her life to bring back any of the [other] individuals who died that day, especially 9-year-old Christina.

“Christina was standing in-line to ask Gabby about the recent oil spill, but Gabby never had a chance to meet her before the shooting.”

Six people died by the same gun that critically injured Senator Giffords, and she maintained Tuesday night that she would give her life to save any of those people. Again and again, Giffords exhibits love and compassion to complete strangers; most of us at the forfronts of political debate would do well to follow her lead.

“There are solutions to the problems. . . fight, fight, fight!” Giffords exclaimed at the end of her speech. Kelly explained, “people doubt their ability to influence what seems like a broken process; [though] politics can be polarizing, every single individual has a lot more power than they realize.”