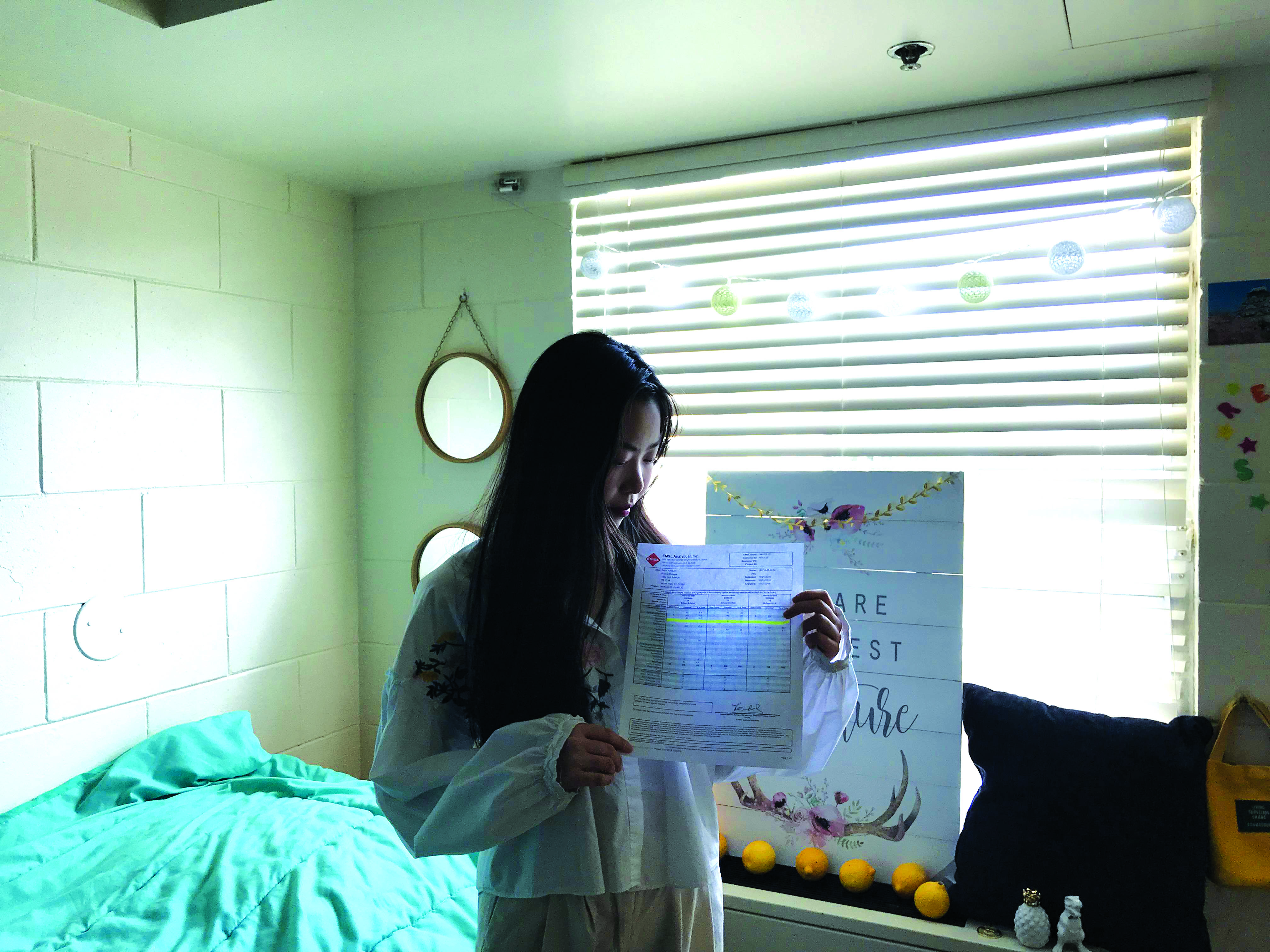 It started in September for first-year student Ruiling Gao. The McKean Hall resident started experiencing a cough, post nasal drip, and a sore throat. She thought it was the common cold most freshmen catch after moving into a new, more crowded environment.

“I hadn’t been this sick before I came to Rollins,” she said. She said she took some medicine at first, but nothing really helped. “I was coughing every single day. I just kept coughing.”

Then she noticed the dark-colored mold growing on her ceiling in mid-October and knew her month-long symptoms were not just related to the common cold.

Apparently, a leak had sprung up near the fire-sprinkler head in her room, located on the second floor, giving the mold the perfect environment to grow. Gao said she was grossed out and insisted on immediately changing rooms. She contacted her resident assistant, who helped her move to a different room until Facilities Services could conduct an air quality test and take subsequent actions.

Gao said that facilities conducted three air quality tests which proved that the mold spore count in her room was high. “[Facilities] started fixing my ceiling by removing the mold, then removing the drywall,” Gao said.

After that, water was still leaking from her ceiling, so the drywall was removed again, the leak was fixed, and the ceiling was patched. About two weeks after the issue was initially reported, facilities retested the rooms air quality and the results showed that the mold spores were down to the appropriate levels. After these changes, Gao said she is feeling better.

Victoria Salmon (‘22) had different issues in her room, which is on the fourth floor of McKean. “I have found bugs on my bed, desk, and air conditioning unit,” she said. “I’m pretty sure there are ants living in the ceiling because I always see a trail of ants in the corner of my room right next to my bed.”

In addition to the bugs, Salmon said, “I am literally always sick now. It is harder to breathe in general now. I always feel winded. I always wake up with my nose stuffy or post nasal drip.”

Salmon has not yet filed a complaint to the Office of Residential Life and Explorations because she wants to create documentation of the problem through photos. She also worries about the disruption of being forced to stay in a different room while facilities personnel handle the situation.

If there are concerns when the results come back, Hayner said Rollins will “work with our facilities office to determine a plan of action depending on what type of spores it is or what the cause may be.”

Eventually, the mold problems will be resolved, because a new residential hall will be built in place of McKean. “…we’re hopeful that construction would start maybe late this summer or next fall. We would build around McKean Hall for about a year, and then demolish McKean,” Hayner said.

Hayner encouraged students with questions or concerns about their living conditions to contact Facilities Services or Residential Life.

Hayner also encouraged students who are experiencing poor health to schedule an appointment at the Wellness Center.

“The College takes the health and wellbeing of our students very seriously, and if there are issues, we act very quickly to remedy those,” he said.

The price of moldy dorms