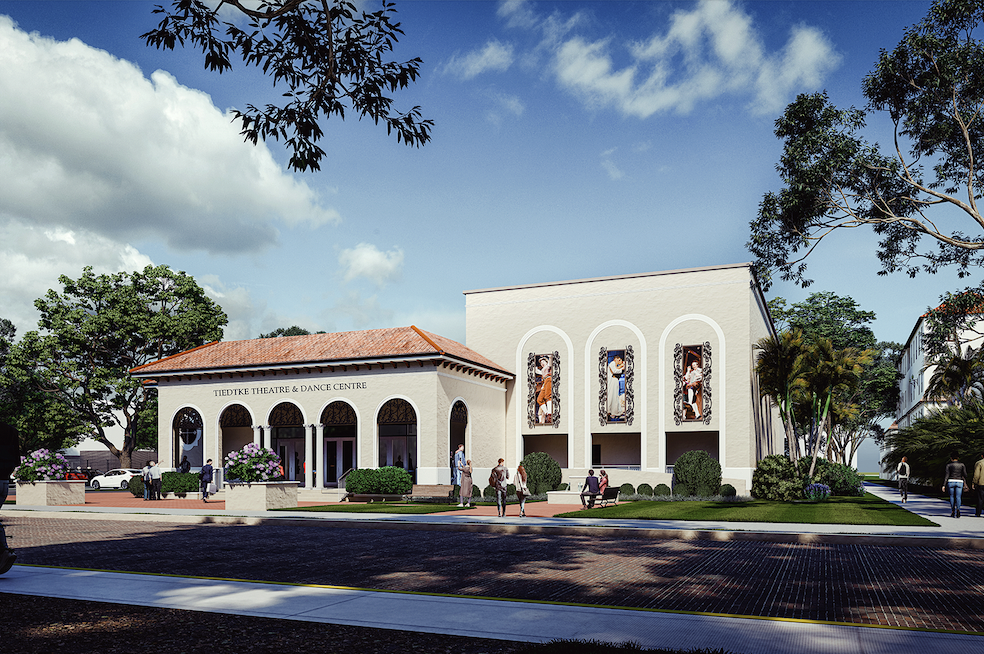 By Arabella Lilleslatten on November 19, 2021

Excitement permeated the air as students, faculty, alumni, and trustees gathered to celebrate the groundbreaking of the highly anticipated Tiedtke Theatre & Dance Centre on Nov. 10.

The Tiedtke Theatre & Dance Centre will cover more than 1600-square-feet and is expected to be completed in Fall 2022. It will be located next to Keene Hall, which houses the John M. Tiedtke Concert Hall named after Philip Tiedtke’s father, who attended Rollins as a music major in 1920 and passed away in 2004. At the ceremony, Tiedtke warmly cited his family’s gift of $5 million as an homage to the memory of his father.

Eight gilded hard hats rested on shovels in sand during the ceremony, and the turning over of the sod signified the new era of enhanced creative performance at Rollins. Among those who donned the golden hard hats were Sigrid and Philip Tiedtke, benefactors of the new building, and beloved Rollins alumna and composer Sally Albrecht (‘76), who has also generously supported the project.

The building will house a black box theater slated to fit more than 140 audience members. It will also include multiple classrooms reserved for performing arts disciplines, such as directing and acting, as well as a costume design and technology lab. Rollins released additional details of the sophisticated sound and lighting systems in the theatre, and visuals of the projected edifice, in an article in Rollins360.

Cornwell told The Sandspur, “The fantastic theater and dance program at Rollins has needed a new second stage theater and a new dance facility quite literally for decades, but in the last few years the need has been especially urgent since we had to condemn the old Fred Stone Theatre and tear it down.”

Fred Stone Theatre was condemned in 2018 due to safety concerns. Since then, the black box theater has been temporarily relocated to the second floor of the off-campus Pioneer building.

Albrecht reflected upon her experiences in the “sweet, mouse-housed, hallowed building” of the old Fred Stone Theatre, and she hopes the Tiedtke Theatre & Dance Centre will continue its legacy.

At the groundbreaking ceremony, Albrecht lovingly referred to the Chase and Holt Avenue intersection as “my little corner of the world,” as she graduated from Rollins as a music and theatre major.

Albrecht said, “I’m proud and honored to have been involved in promoting and contributing to this dream facility since 2016. And I certainly plan to be here to celebrate when it becomes a reality.”

The crowd shared her excitement, especially theater students who flocked to the ceremony to witness the dawn of a new era for the arts at Rollins. In a statement to The Sandspur, Cornwell said, “The new Tiedtke Theatre & Dance Centre will bring a host of new teaching, learning, and creative spaces to campus, all for one purpose only, and that is to enrich our students’ opportunities in theater arts.”