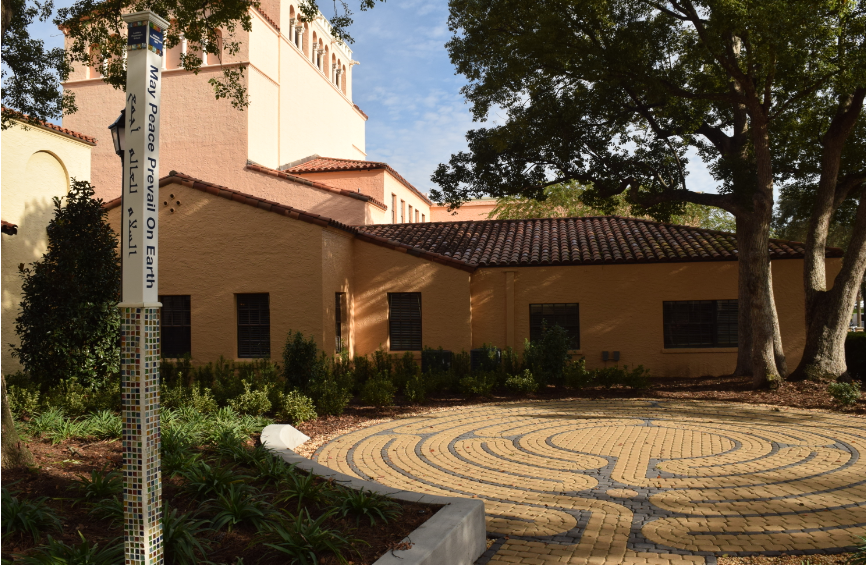 Rollins officially opened a new spiritual space on campus. The labyrinth, located between Knowles Memorial Chapel and Annie Russell Theatre, is a circular courtyard with a winding path that leads to its center. The path is meant to inspire contemplation and evoke a sense of connection to community.

The opening ceremony on Oct. 21 began with remarks by Reverend Katrina Jenkins, dean of Religious and Spiritual Life. She spearheaded the project alongside Hamilton Holt School music student Frank Faine (‘24), the project coordinator.

In their speeches, Jenkins and Faine expressed their appreciation for Victor Zollo (‘73) and Jackie Zollo (‘73), whose donations funded the labyrinth’s construction; the school employees who oversaw the construction process; and representatives from the Labyrinth Society, an organization dedicated to building similar labyrinths around the world.

The Rollins labyrinth is the fourth structure created as part of the Labyrinth Society’s program; sister labyrinths are located in Argentina, Canada, and Ohio.

After the opening remarks and a speech from President Grant Cornwell, attendees were asked to stand in a circle around the labyrinth. Vials containing materials from the other three labyrinths were given to each attendee, which were then poured into a bowl of water brought around the circle.

Once mixed, the contents were scattered around the border of the labyrinth––literally and metaphorically linking the new labyrinth with its sister locations. The ceremony concluded with a benediction from Jenkins and a musical performance from music students Samantha Alenius (‘23) and Lexi Shroll (‘23).

“When I first came to Rollins,” said Jenkins, “I felt that it was my mission to fix any spiritual brokenness I saw in our community. I hope that members of our community who feel lost and alone can find a sense of belonging at the center of this labyrinth.”