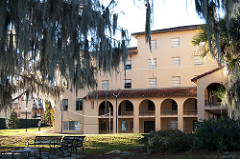 Why did it have to take freshmen getting sick for McKean’s living conditions to be addressed?

After reading the article “Mold and bug concerns reported in McKean” in The Sandspur, I only had one question: Why did it have to take freshmen getting sick for McKean’s living conditions to be addressed?

The article said, “Eventually, the mold problems will be resolved, because a new residential hall will be built in place of McKean.” I understand why Rollins is demolishing McKean—it is pretty gross—but why did Rollins tear down Mills before addressing McKean? Why do we have plans in place to build a new residential hall right next to McKean, before we have plans to clean up the already standing building right next to it?

I have heard some horror stories from people that used to live there. Some of my friends have blamed chronic bronchitis, lead poisoning, and even a staph infection from living in McKean during their freshman year at Rollins. This is obviously taken with a grain of salt because no one can actually prove that McKean caused their ailments.

However, we should take note that three of my friends who lived in McKean—and had no prior health conditions—had some pretty serious health problems their first year. Interesting stuff, right?

Check out The Sandspur’s previous coverage on mold issues in residential halls.

I know the mold problems will be resolved, and I am aware Rollins cares about our health first and foremost. There is no arguing that, but I think they have dropped the ball when it comes to precautionary action. This is not the first time that I have heard about McKean being a gross place to live in. I am a senior, and even my first year at Rollins I remember people saying, “Yeah, I live in McKean. I know, it sucks.”

How much do we pay to go to Rollins? Considering how crazy the tuition is, no one should be saying negative things about any living space. Being a freshman is hard; having to leave home, adjust to a new environment, and have a completely different course-load while trying to make friends is stressful enough.

Granted, the new plans for Mills will definitely benefit Rollins’ reputation of being one of the most beautiful college campuses. However, no one is living in Mills. It should not have to take freshmen getting sick, seeing dark-colored mold on their ceiling, or finding trails of bugs on their walls for it to be a topic of discussion.

McKean has always had a reputation for being the worst freshman residency. Ward and Rex Beach are drastically better, so I cannot help but wonder why Rollins just started paying attention to it when the mold got out of hand. It is an old building and even just when you walk in, feels muggy and humid. Come on Rollins, the signs were there.