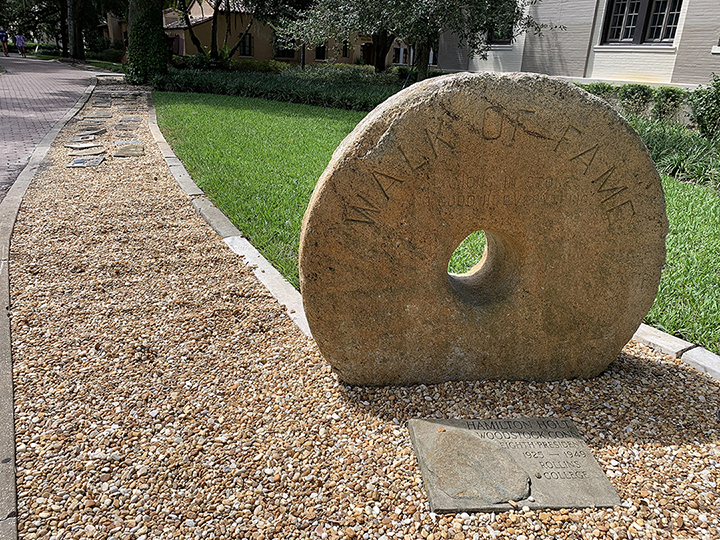 President Grant Cornwell ordered the removal of nine Walk of Fame stones that commemorated historical figures who supported the institutions of slavery and the Confederacy. Records of the stones are being kept in the college’s archives while the stones themselves were relocated to Facilities Management in the wake of #BlackLivesMatter protests across the nation this summer.

Jackson and White each had two stones dedicated to them.

“I thought that this was an important moment to remove them. This is something I took the initiative on because I thought it was the right thing to do,” Cornwell said. “I consulted with the Board of Trustees and they supported my decision. I wanted to do it before students came back and let students and staff know that I did it, because I could not countenance having stones celebrating the Confederacy on our Walk of Fame.”

The Walk of Fame is a semi-circular pathway surrounding Mills Lawn at the center of Rollins’ campus. It was created by Hamilton Holt in 1929 and was started with 20 stones, most of which were obtained during Holt’s travels throughout North America and Europe.

Cornwell said, “Frankly, I’ve always found [the Walk of Fame to be] a bit of an oddity. Hamilton Holt’s intent for it was not to have stones that Rollins wanted to lift up and celebrate the people who…identified with our values, which was something I could not understand.”

Holt’s intent for the Walk of Fame was to display people who changed history, for better or worse.

“Holt had even suggested that Adolf Hitler should have a stone because he changed history,” Cornwell said. “I think the whole installation was problematic.”

Most state governments are also making efforts to remove such monuments and symbols that advocate white supremacism, such as the Confederate flag, from public places.

Papaa Kodzi (‘21), president of the Black Student Union, believes that while Rollins’ effort to redress its past mistakes was good, the college has yet to show the level of effort necessary for racial justice to truly be upheld.

“[The decision was] well intentioned, but a classic action of performative activism,” said Kodzi. “It seemed like [the announcement] was withheld until there was another national headline and then publicized to make a point … My biggest questions are: ‘How long have you known, and why only now are they being removed?’”

When questioned on whether the change to the Walk of Fame altered his opinion of the college, Kodzi stated that it only further confirmed his pre-existing thoughts.

“I think a major reason that the stones were removed now was for PR; many people didn’t even know about them in the first place,” said Kodzi. “It probably took so long because there was little to no public pressure on this issue, which means that the internal drive to address it was minimal.”

Cornwell responded to the idea that the removal of the stones was purely performative: “In some sense, it is performative. I don’t consider [the removal of the stones] sufficient at all. It’s just a small part of all the work we need to be doing. I want to emphasize that we have to stay with this as a college for years, and we have to insist on changes in policy, in practice, in mindset, in values, and in behavior.”

Rollins has shown renewed interest in promoting racial acceptance and diversity among its community over the past three months.

“Over 200 members of the Rollins community will engage in a year-long commitment to conversations on race, inclusion, and anti-racism, with the goal of building a better Rollins. I am inspired by the number of academic courses centered on diversity … Many of our academic departments are exploring their role and responsibility around racial justice.”

In his campus-wide email sent out on Aug. 27, President Cornwell announced the removal of the nine stones from the Walk of Fame and expressed that this is just an early step in a growing culture of acceptance on campus.

“Doubtless there may be other stones commemorating persons who would not stand up to critical scrutiny were we to use our mission as a lens, but that is not what we are doing now,” Cornwell said. “I am not averse to further considerations, but at this moment we take this action as a symbol of both protest and reconciliation … “

Records of the nine stones removed by Cornwell are held in the Rollins College Archives by Head of Archives Professor Wenxian Zhang.

Cornwell said that his decision to preserve the stones was made so that they can be accessed by future historians and students who want to study the history of Rollins.