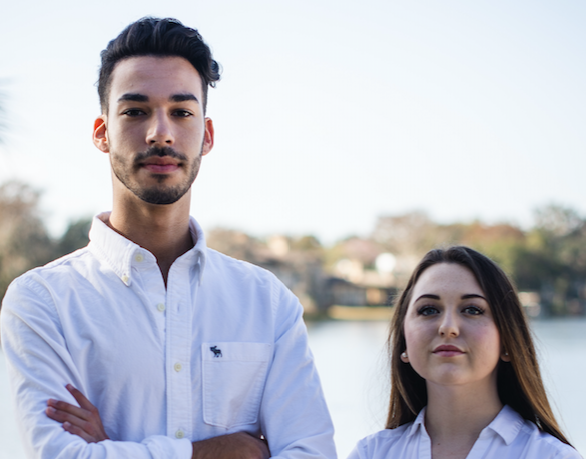 Matthew Weiner (‘20HH) is running for SGA president alongside Sydney Brown (‘21) for vice president. Weiner is the first Holt student to run for the position. With more than 15 initiatives outlined on their campaign posters, Weiner and Brown said their on-campus leadership, communication abilities, and diverse experiences make them the best candidates to lead the student body. Here’s what you need to know about their campaign:

To encourage students’ overall well-being, Weiner and Brown want to add vending machines with vegan and gluten free snacks in easy-to-access locations so students with dietary restrictions can grab healthy food on the go. “Right now, most vending machines on campus sell soda,” Weiner said. “They are not being used to their full potential.” Weiner and Brown

also plan to place ice machines in every residence hall. This would

As SGA finishes its Student Life App, Weiner and Brown are determined to digitize R-Cards. Doing so would reduce the need for plastic debit and credit cards on campus. “Not everyone has their R-Cards on them all the time, but everyone always has their phone,” Weiner said. The technology would be accessed through the Student Life App and would work similarly to Apple Pay.

Weiner and Brown agree that transportation is a huge issue on campus, especially as construction bars on-campus parking. “We can’t promise more parking spots. It wouldn’t be feasible,” said Brown. However, the candidates want to partner with Uber to give students discounted ride-share prices. Additionally, they want to add technology that would alert students to how many parking spaces are available in campus parking garages to avoid wasting time.

The candidates also want to offer a shuttle that drives students to the Orlando International Airport for free during major holidays. This would aid international students and those whose families live out-of-state. “There is no reason students should have to pay $30 for an Uber when SGA has the money to pay for a shuttle,” Brown said.

Weiner and Brown both want to focus on increasing transparency with students. Their campaign, titled 2020 Vision, is meant for students, faculty, and SGA members to see Rollins’ future clearly. “Our campaign is focused on starting important discussions and shedding light on issues that are often overlooked,” Brown said.

If elected, Weiner would be the first Hamilton Holt student to be SGA President. He gets his inspiration from current Vice President Greg Taicher (‘19), who was the first student athlete to be elected into an SGA executive position.

“It was a great experience having Greg Taicher to help us implement the voice of other student athletes in regards to what they would like to see on campus,” Weiner said. “I would like to emulate this for Holt students, as well as any student who struggles to find their place on our campus.”

Weiner has been in SGA for three years and Brown for two. The pair have diversified experience in Rollins life, connected to on-campus organizations related to sustainability, academics, gender equity, and even the Board of Trustees. “We have a 360 view of what is happening on campus,” Brown said.