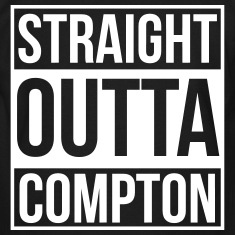 Straight Outta Compton is one of the best ways to close off the summer film block. Directed by F. Gray Gary and starring O’Shea Jackson Jr., Jason Mitchell, and Corey Hawkins, the movie takes place in the mid 1980s where five young men from Compton create the revolutionary rap group NWA. The film focuses on three specific men, Ice Cube (Jackson), Dr. Dre (Hawkins), and Eazy-E (Mitchell), and their lives before and after the NWA.
This film understands each character’s motivations and faults. The main cast floors it with fantastic performances, each showing the slow growth of their respective historical figures. I was especially impressed by Jackson’s performance of Ice Cube, who is his father in real life. He truly understood how his father was and nailed not only the complexity of his voice, but his behavior and small gestures.
Mitchell and Hawkins also understood their parts, giving full respect to the people they were playing. The side characters were plenty too, ranging from the rest of the NWA group to some of the most famous members of rap and hip-hop history. In particular, Paul Giamatti surprised me in his delivery of the role of a somewhat slimy businessman.
The two biggest compliments I have, aside from the acting, are the intense standoffs and the portrayal of the ruthlessness of police brutality and racial profiling.
The standoffs in this film are incredible. You truly feel the intensity of the people in the room as they face off against one another—with no punches thrown or shots fired. The simple act of glaring at one another has never been more terrifying. Producers Ice Cube and Dr. Dre truly wanted the film to show the authenticity of some of the most terrifying situations that they went through. An intense faceoff with drug dealers has never been more suspenseful and gripping.
Which brings us to the point of police brutality. One of the film’s best shots involved members from the most infamous rival gang fight holding up their respective colored bandannas, tied at the middle. They slowly walked toward the police line, raising their symbol of unity in defiance of injustice. It literally took my breath away, struck by its sheer beauty and fear.
Straight Outta Compton was a film that was sorely needed. Few people know about NWA’s strides against censorship that broke the music industry’s expectations and rules for future musicians. In this time of racial profiling and police brutality against African Americans, this film shows a young audience that this is not new, that it used to happen, and that it still does. It attempts to show the people that the music seen as vile and simply bashing police authority was in fact a reflection of the truth in Compton and in LA. I urge people to see this film even if they are not into rap or hip-hop, because it is more than just that. Straight Outta Compton is a piece of history that must never be forgotten.