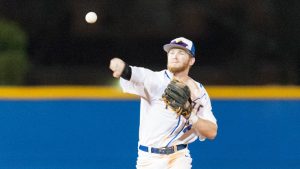 The Rollins Tars Baseball team started off the weekend strong with a decisive 7-0 win against Bentley Friday night. This Friday night shutout was the fifth win of the season and brings the Tars to a 5-2 record for the season as Bentley drops to 0-4 for the season. Brad Case’s pitching and the Tars’ defense shut down the Bentley hitting line-up early on as the Bentley’s first two innings ended up being three-up-three-down. Offensively, the Tars started off strong as centerfielder, Peter Nicoletto brought in two runs with a triple down leftfield. The Tars’ fielding kept Bentley struggling to get runs in the third inning with a quick three outs. Meanwhile, junior infielder, Grant Ashline kept the momentum going for the Tars as he popped off his first homer of the season at his second at-bat of the game, bringing the score to 3-0. The next two innings were tense as both Bentley and Rollins struggled to get men home, but Rollins got back into the swing of things in the sixth inning as Bentley’s fielding slipped and the Tars brought two more runs home. With a 5-0 lead the Tars didn’t let up as Peter Nicoletto’s single to left-field in the seventh inning brought home Mike Purcell for the sixth run of the game. Rollins’ pitcher Bret Scafidi was brought in in the eighth inning to keep Bentley’s batting in check. Meanwhile, the Tars continued to score as the bases were loaded in the eighth inning and the final run was brought in, shoring up the score at 7-0. The Tars entered the ninth inning with a sure victory ahead of them and finished up the ninth like the eight innings before; without letting a single Bentley run cross home plate. Starting of the weekend hot, with the Bentley shutout, the Tars went on to win their game against Southern Conn on Saturday with a final score of 4-3. On Sunday the Tars went on to bring another win home against Bentley with a final score of 7-6. With three consecutive wins in their pocket, the Tars are looking at a three-game series against Embry-Riddle for the last weekend in February. Come out to support the Rollins Tars at their next Baseball game this Friday, the 24th, at 6pm!