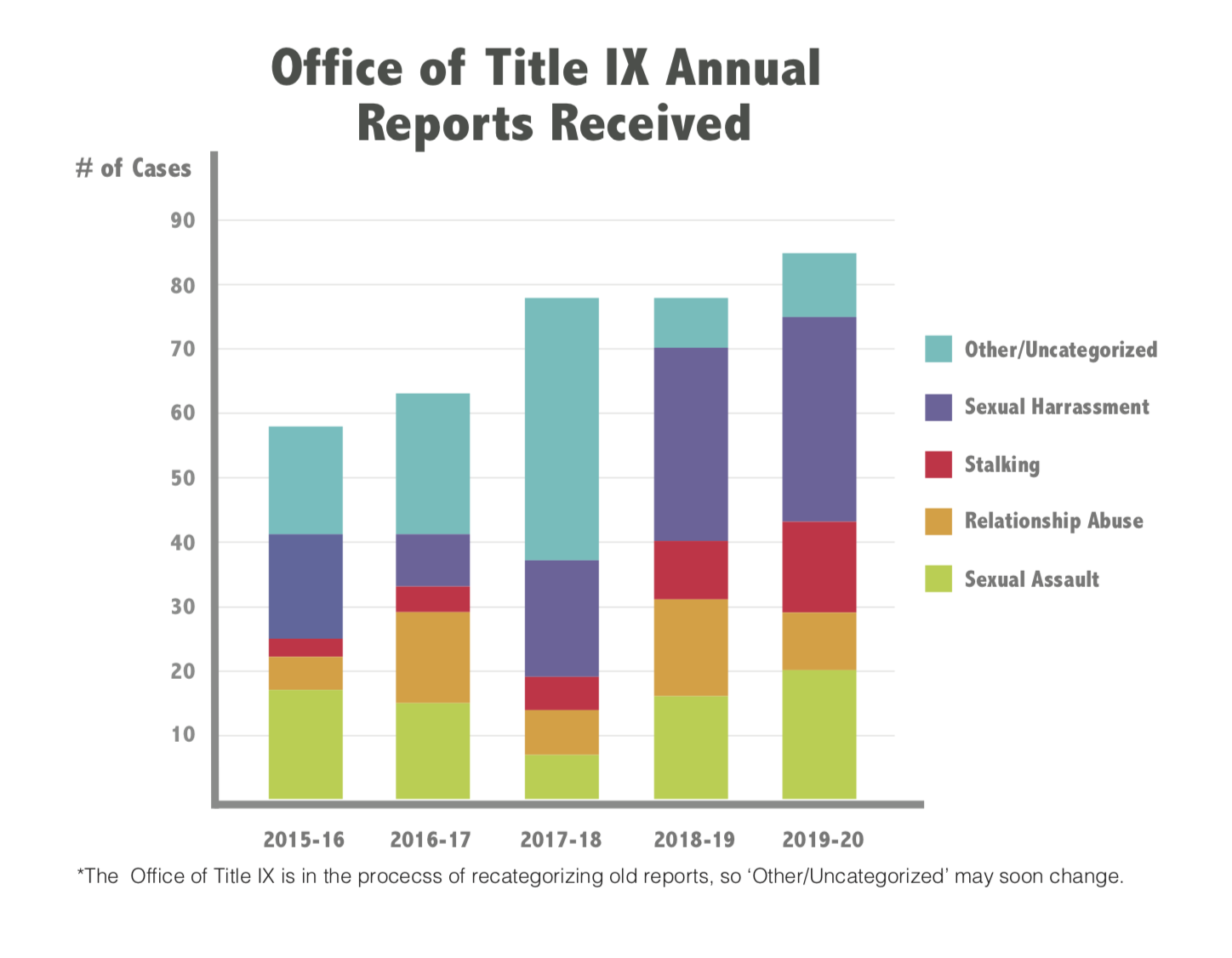 Reports of gender- and sexual-based discrimination are on the rise at Rollins, but members of the community are mystified by the process of reporting. Many students do not know where the Office of Title IX is located.

The office has filed about 85 reports of misconduct during the ongoing 2019-2020 term, following an increasing trend in reporting over the last five years.

Despite the 85 reports, only 20 investigations have been opened in the last five years.

In response to questions about the increase, Title IX Coordinator Sarah Laake said, “We know these types of incidents are vastly underreported overall, so increase should be viewed as a positive development associated with more survivors seeking assistance and accessing resources.”

President Grant Cornwell shared a similar sentiment when asked about the growing numbers: “What we want is a culture where students trust the system well enough to report when there’s an incident or when they think they’ve been aggrieved, so higher reporting numbers gives me some confidence that at least that number of students do trust the system and want justice to be sought.”

Although the number of reports have risen, students still feel that they do not know enough about the office.

In an anonymous survey conducted by The Sandspur through a campus-wide email, over 60 percent of the 231 student respondents claimed they did not know where the office is located or who to contact there.

However, Laake said that the office is  “as visible as we can be; the one and a half of us … It’s definitely accurate, though, how people don’t really know what they can ask for.”

While Laake acknowledges the office’s small staff size, she does not believe it is understaffed.

“While I would welcome and love to have additional staffing and resources … we are doing the very best we can with the resources that we have,” said Laake.

The office has moved across campus several times in the past year due to construction, and its staff has changed accordingly.

Only Laake can manage cases and handle reports.S

Student Experiences Past and Present

Emily O’Malley (‘22) became involved with the Office of Title IX when she reported she was sexually assaulted by a Rollins student in Fall 2018.

This was a transitional period for the office, as the former Title IX coordinator, Oriana Jiménez, had recently left Rollins to pursue another career path. The hiring process for a new coordinator was not yet complete.

Because of this, O’Malley had to report to then-Title IX Program Specialist Amanda Serpa.

O’Malley said, “When I first reported what happened to me, I was told that it would be too emotionally difficult to undergo an investigation … [Serpa] also told me that if the school environment was really too much for me, that I could always consider transferring to a different university.”

O’Malley also said that Serpa told her Campus Safety would be heavily involved in the investigation process if she chose to move forward with it.

However, Campus Safety is not involved in the investigation process unless it is contacted by the reporting party about the incident.

Campus Safety’s involvement is limited to sending timely notifications in the case of incidents that are notifiable under the Clery Act—a law that aims to provide transparency around campus crime policy and statistics.

All investigations are carried out by a third party hired by the college.

The Sandspur reached out to Serpa, who is no longer employed by Rollins, but received no response.

Right before the Fall 2019 semester ended, O’Malley decided to report her case again, hoping this time to pursue an investigation. O’Malley was optimistic that the process would be smoother now that a Title IX coordinator had been hired.

O’Malley went to Laake to reopen her case and start an investigation, but the responding party was not notified in a timely manner, which delayed the investigation by over a week.

Once the investigation began, O’Malley agreed to sign a limited release, allowing the investigator to contact her CAPS counselor to discuss the case.

However, instead of copying her CAPS counselor to the email thread, a faculty member whom O’Malley had never met before was sent identifying and personal details about her case.

While Laake apologized to O’Malley via email for the incident and assured her that the recipient was a trusted member of the faculty who would delete the email, O’Malley felt that this error violated her confidentiality and damaged the integrity of her case.

Laake was unable to comment on individual cases due to the sensitive nature of Title IX policy, but she said that the office takes confidentiality seriously. She also noted that the digital nature of communication can open the door to mistakes.

“To the best we can, we protect people’s privacy. Sometimes, human error occurs,” said Laake.

O’Malley intends to continue her education and graduate from Rollins, but she said this process has negatively impacted her relationship with the college.

O’Malley is a Diplomat for the Office of Admission, and she has found herself doubting her role in that position.

“I chose this school because I really love it … now I don’t even know if I can continue to be a tour guide after all of this because I don’t know if I want to encourage young women to apply to this school. And that’s difficult, because it’s one of the jobs I love the most,” said O’Malley.

Rodriguez is a mandated reporter, meaning his position requires him to report violations of Rollins’ Code of Community Standards, including offenses related to Title IX.

Rodriguez believes that mandated reporters need more education on the role of the office.

“In all honesty, I feel like a large amount of the mandated reporters aren’t aware of what Title IX fully encompasses,” said Rodriguez.

Dr. Kim Dennis, a mandated reporter for Rollins and professor of art history, has had formal training at a rape crisis center. Several of her students have approached her to talk about their Title IX experiences.

Dennis believes that, while the office still has much to accomplish, it has made strides to improve the ease with which one can file a report.

“The system does not work well, not here or anywhere,” Dennis said. “When I first got here, the [numbers reported according to the Clery Act related to Title IX] were always zero … and that’s because there was no one to go … But these numbers go up when we have a person, an office, a place where people can go,” said Dennis.

Cornwell said that the changes made within the office throughout his five-year term at Rollins are not enough.

“I want to believe that we are on a pathway to becoming a more just, a more compassionate, more humane, and more respectful society and campus culture, but the evidence keeps proving me wrong,” said Cornwell.

In order to reduce the number of incidents that require reporting to Title IX, Cornwell encourages students to take the message of Title IX policy to heart.

“We have programing, and every student goes through it. I think it would be quite wonderful if every single student listened … and had a sufficient amount of awareness and humility to say, ‘Maybe I need to listen to this,’ and behave differently,” said Cornwell. “I think it’s perfectly reasonable to expect this to be a campus culture where there is not a single instance of sexual misconduct … so I’m disappointed in the numbers, but I’m happy that the system is working.”