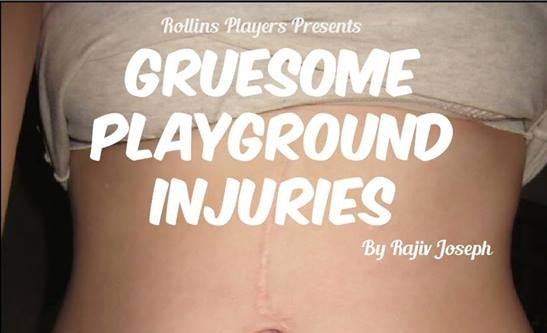 The dark themes attached to this semester’s last show at the Fred Stone, Gruesome Playground Injuries, are expected to profoundly resonate with its satisfied audience.

This weekend marks the last show in the Fred Stone Theatre this semester: Gruesome Playground Injuries, written by Rajiv Joseph and directed by one of our own lovely Rollins students, Hanna Cole ’14. This piece strays away from the more humorous side of theatre than previous productions this semester have, as the title might accurately lead you to believe.

The play takes place over a span of thirty years and revolves around two childhood friends, Doug and Kayleen. The two are both fascinated by each other’s troubles and imperfections. Their relationship has no defined boundary, and we get glimpses of them interacting as the play jumps backwards and forwards in time, the two always managing to run into each other again at the scene of some new pain. They re-unite in insane asylums, hospital rooms, funerals—always finding each other when one of them is “injured,” either mentally, physically, or emotionally. Events vary from as simple as a few scrapes to as dramatic as losing an eye. Each time, Kayleen and Doug grow closer and closer together, as is only natural of two individuals whose vulnerabilities are constantly being exposed to one another. The bond they share is unique, yet reality is still sprinkled in.

Director Cole said, “The characters are so layered and true to life that I imagine it would be difficult not to find some similarities for each audience member.”

And that is what theater is all about—viewers gaining a connection with the art.

Taking place in the restrictive space of our black box theatre, there will be no behind-the-scenes mystery. All make-up and costume changes will be purposefully done openly on stage for the audience to witness. Cole has even hinted that there will be an interactive element to the show. She aspires to “drive the point home that the show isn’t about the ‘magic’ behind the scenes, but about the message and the words of the piece.” The intimacy of this production is sure to have an emotional impact on audience members, drawing them closer into the fabricated world.

The couple was cast as Chris Stewart ’15 and Katherine Waddell ’14, and the stage manager for the production is Talii Stokes ’15. Try your best not to miss this special portrayal of art at its finest. The show opened on Wednesday, April 9 at 8 p.m. and will continue on April 10-11 at 8 p.m., Saturday, April 12 at 2 p.m. at 8 p.m., and Sunday, April 13 at 2 p.m. Of course admission will be free, so what better way to escape the stress of the end of the semester than sitting down and immersing yourself in a play?