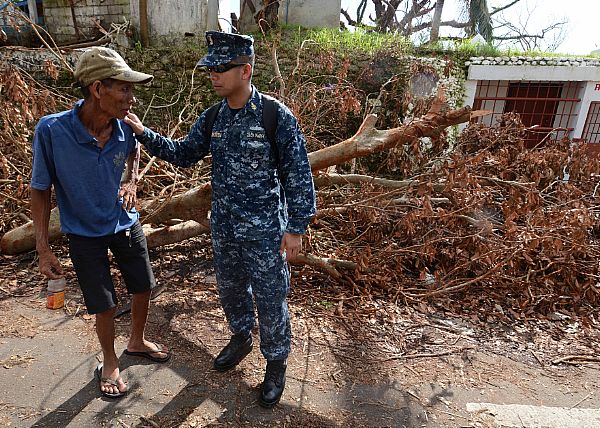 The Philippines are trying to recover from a typhoon that left as many as 10,000 people dead. Super Typhoon Haiyan hit the Philippine province of Leyte early Friday morning. Strong winds and torrential rain pummeled the eastern Philippines. Tacloban, the capital of Leyte, was the worst hit city and is the center of current relief efforts.

In the city of Tacloban, there is no functioning government or operating hospitals. These have been abandoned as the employees who survived the typhoon try to keep their own families alive. Many people are still searching for missing loved ones. Dead bodies are everywhere in the city, and the stench forces most survivors to cover their mouths and noses to breathe.

There is great concern of disease and sickness resulting from the conditions the people are living in. The survivors are also without food or clean water. Many people have resorted to looting what few stores and homes are left.

As people respond to the tragedy, relief effort is pouring in, with many countries, including the US, providing aid. The US has sent in aircraft carriers and ships with food, water and soldiers. However, many people complain that they have received no aid. This difficulty of providing aid stems from destroyed roads, an inactive government and the large amount of looting and crimes occurring in the destroyed cities. Also, the Philippines is an archipelago of around 7,000 islands which makes it very difficult to distribute aid. Though the US news media is focusing on Tacloban and the other large cities damaged by the typhoon, there are hundreds of small villages that were in the wake of Haiyan with whom contact has been lost. As contact is restored with some of these villages, the death toll may rise even higher.

The president of the Philippines has made some controversial statements. He claimed that the trauma of the event caused officials to overestimate and claim that as many as 10,000 could be dead. However, the death toll continues to rise every day as more bodies are discovered. As relief efforts continue, the full scale of the devastation of Haiyan will become apparent.

Rollins Relief will be holding a meeting Thursday, November 21 at 6 p.m. in the third floor of Mills (the hub) for those interested in helping.