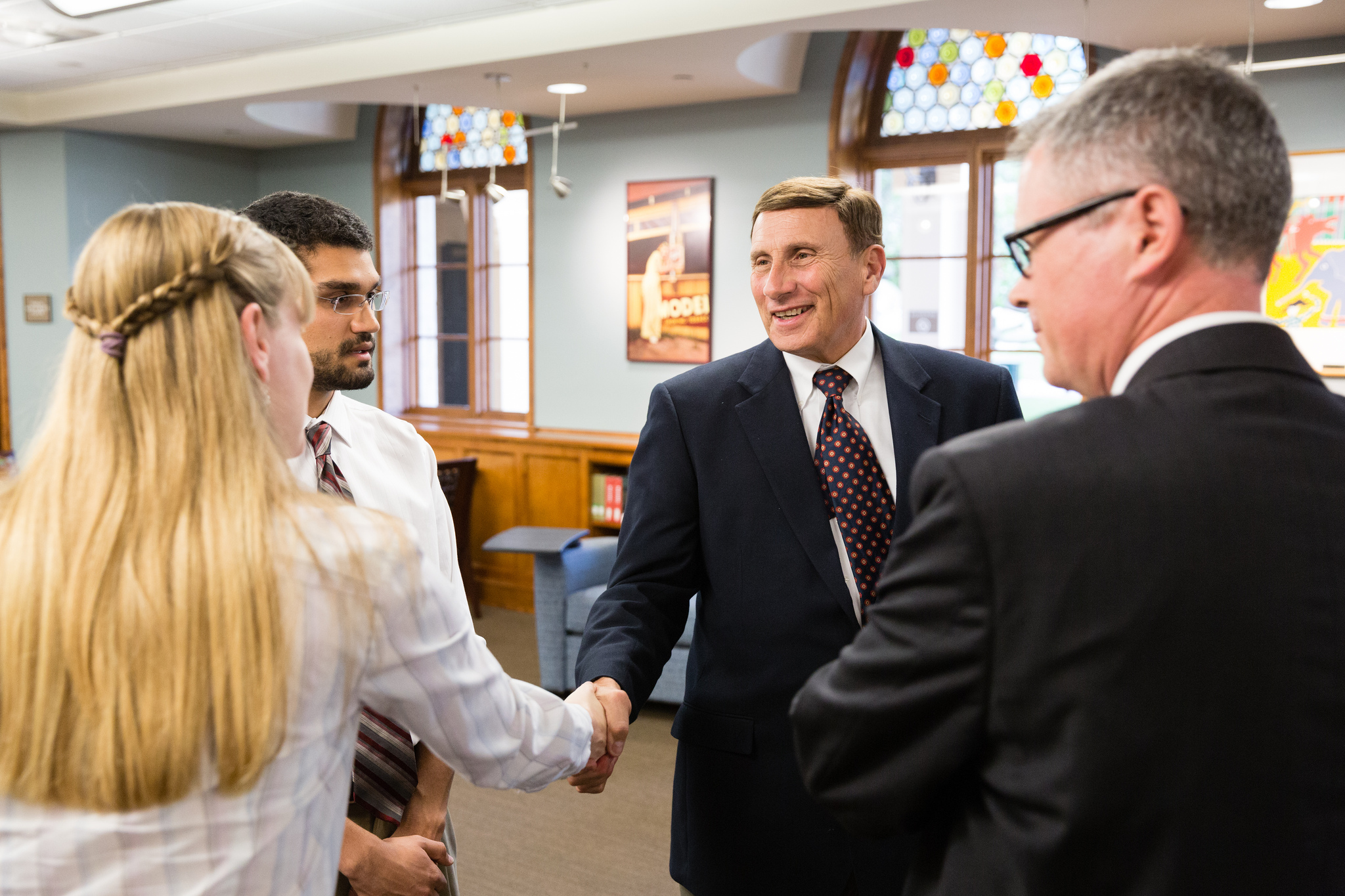 Due to recent redistricting, Rollins College now lies within the 7th Congressional District of Florida. That means our congressman in the House of Representatives is John Mica, a Republican who was first elected to Congress in 1992. Representative Mica visited Rollins College on March 11, meeting with various representatives of the institution and ending his day with a public lecture at the Winter Park Plaza.

I was lucky enough to be invited to dinner with Representative Mica, his personal aide, President Duncan, Sarah Elbadri and Brock Monroe of the Democracy Project (the group responsible for bringing Mica to campus), and about ten other undergraduate students before the lecture. Conversation focused on Rollins’ many impressive programs and facilities and on Mica’s life and many honorary degrees.

Mica’s 20-minute lecture to a room of about 50 people focused on the congressman’s biography and the work he did as the chairman of the Transportation and Infrastructure Committee in the U.S. House of Representatives. Then, joking that he’d only take “friendly questions,” Mica opened up the Q&A. Interaction between representatives and constituents is the essence of a democracy and I was genuinely looking forward to hearing what questions would be asked and how Mica would respond.

He laughed, saying he had ‘lost a lot of votes with that one.

For a veteran politician, Mica struck many in the audience as remarkably impolitic. He spoke of his “jihad” for public transportation, such as SunRail (Jihad is a sacred religious duty of Muslims). He joked about the comparative ease of governing by “dictatorship” in place of democracy (we are ten years into a war that was at least partially about toppling a dictatorship, and he is a congressman).

As wince-inducing as such statements were, it was Mica’s responses to questions about two high-profile topics, immigration reform and the reauthorization of the Violence Against Women Act, that elicited the strongest reactions from the audience.

Mica maintained that he will never support any path to citizenship, “or whatever they call it,” for undocumented immigrants. Mica reasoned that because illegal immigrants had “committed a felony” (this is not true, by the way), they should not have access to any federal programs, specifically Medicare, Social Security, or emergency health care (emergency health care is not a federal program).

The audience reaction to this position—that a person should be denied emergency care because of immigration status—was an uncomfortable silence and the exchange of a fair number of stunned looks. Mica noticed; he laughed, saying he had “lost a lot of votes with that one.”

The second answer that stunned some in the audience was about the recent reauthorization of the Violence Against Women Act. When asked why he voted against this piece of legislation, vital to women across the country, Mica answered by stating that he had voted for earlier versions of the bill and that there were certain things in the final bill which he felt “went too far” and that should be addressed by individual states. When asked what specifically in the bill he felt crossed the line, Mica floundered; the Congressman was unable to name even one specific objectionable aspect of a bill he voted against. This prompted another awkward exchange of looks among the audience. Mica did say that different states could make their own decisions about such topics, and that as much as he “think[s] this country is about equality, and there’s attributes; it isn’t all equal, and there are different states.”

Mica gave another answer—one that didn’t cause any significant stir in the audience—but that resonated with me. When asked what the biggest barrier to civic engagement is, Representative Mica replied, “Oh, just sitting on your butt.” I agree with him. And I thought about how John Mica has been representing Florida in Congress for two decades. And I thought about the fact that he’s up for reelection next year. And I thought that maybe he wouldn’t find jokes about losing votes so funny if we were all a bit more civically engaged.