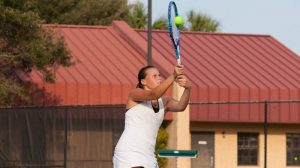 The Rollins Women’s Tennis team battled against Division I school Murray State from Kentucky on Wednesday, March 22. The Tars held a strong lead against the Racers up until the match had to be called due to lightning.

Rollins’ doubles teams swept all three of their matches. Number one slotted partners Fabiana Vitanza ‘18 and Alexandra Borg ’19 showed strength and competence with a win over the Racers’ Schibol and Chang, 8-6. Vitanza and Borg have been working together very well but continue to find comfort in each other as the season goes on. Although the girls are 4—3 this season as partners, their perseverance and dedication to the game will push them forward into the offseason and prepare them even further as returners.

From there, partners Shannon Etten ’17 and Carlye Goldman ‘19 dominated their opponent with an 8-4 win in the second position. Goldman and Etten have been working together in this slot the past seven matches, and they have proven to be a strong duo. They came together after every point and continued to show resilience even if the outcome of the set was clearly not what they wanted.

The doubles sweep was captured by the final pairing of Savanna Fuller ‘19 and Teresa Kaiser ‘19 with a 9-7 victory in the third spot. Kaiser and Fuller have partnered together on 14 out of 16 of their total matches and have demonstrated great teamwork. They now move to 9-5 on the season.

Vitanza triumphed her opponent Anja Loncarevic in three sets, 6-1, 3-6, 6-2. The promise this matched showed could not be collectively counted due to the weather. Unfortunately, the matches being played by Fuller, in the fourth position, and Kaiser, in the fifth spot, could not be completed.

Rollins continues to gear up in preparation for a long list of SSC rivals, including their next match being hosted by #25 Florida Southern. The Tars will travel to Lakeland, FL on Wednesday, March 29 for a 3:00 match. Until then, keep up with your Women’s Tennis team through Rollinssports.com.