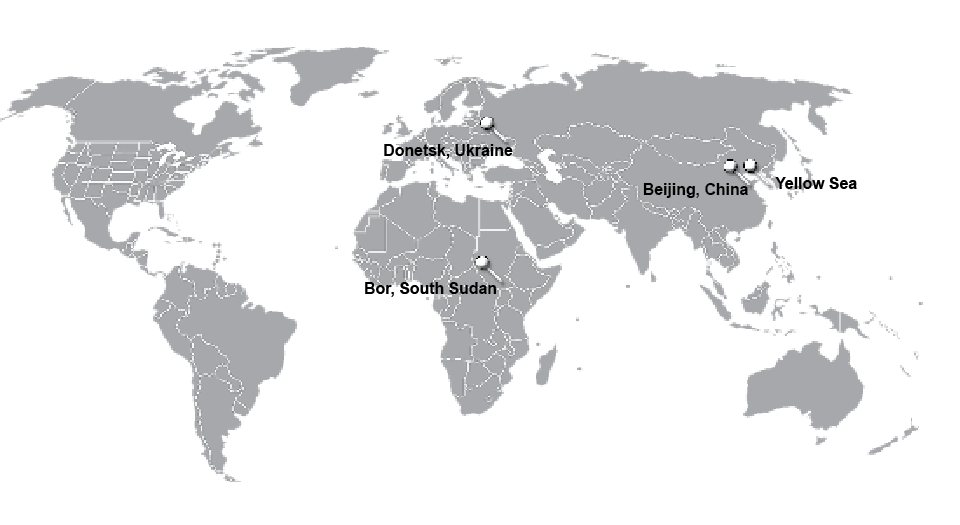 Yellow Sea, off the South Korean coast
A ferry carrying mostly elementary and high school students capsized off the coast of South Korea. The ferry was traveling from the northern city of Incheon to the Korean vacation island of Jeju. Of the over 400 passengers, nearly 300 are still unaccounted for as rescue efforts continue in poor weather conditions of strong winds and rain as well as the frigid temperatures of the Yellow Sea. The captain and other members of the crew have been arrested in suspicion of negligence and abandoning the boat when its passengers were in need. Rescuers are continuing to pull bodies from the overturned vessel (BBC, USA Today, Washington Post).

Donetsk, Ukraine
Worshipers leaving the local synagogue were handed fliers declaring that all Ukrainian Jews needed to register as such. The city, which has been under pro-Russian militant control for two weeks, is the center of the coal-mining region of the Ukraine. The fliers say that Jews must report to the building currently being used as headquarters for the militants and pay the equivalent of $50 each, or “the guilty ones would be deprived of their citizenship and deported outside the republic and their property confiscated,” according to the New York Times.

Worshippers leaving the local synagogue were handed flyers declaring that all Ukrainian Jews needed to register as such.

Beijing, China
The Chinese government has recently released a years-long study done on the soil after facing increasing public pressure. According to the study, which lasted from 2005-2013, nearly one-fifth of the country’s soil is contaminated with toxic metals, such as nickel, cadmium, and arsenic, to the point of being hazardous to health. Blame can be shared by multiple factors, such as rapid industrialization, overuse of chemicals in farming and low environmental regulation. Health advocates have already discovered several “cancer villages,” in which the cancer rates are significantly higher than the national average (NBC News).

Bor, South Sudan
Militants attacked a U.N. base in South Sudan harboring civilians, killing 58 and injuring about 100. An angry mob of South Sudanese locals initially went to the base and demanded that the 5,000 Nuers (tribes people) be relocated. They were then scattered by U.N. personnel, regrouped, and launched an attack. The South Sudanese government has sent troops to defend the base. The conflict in the area was originally sparked by a power struggle between former Vice President Riek Machar and current President Salva Kiir (Time).