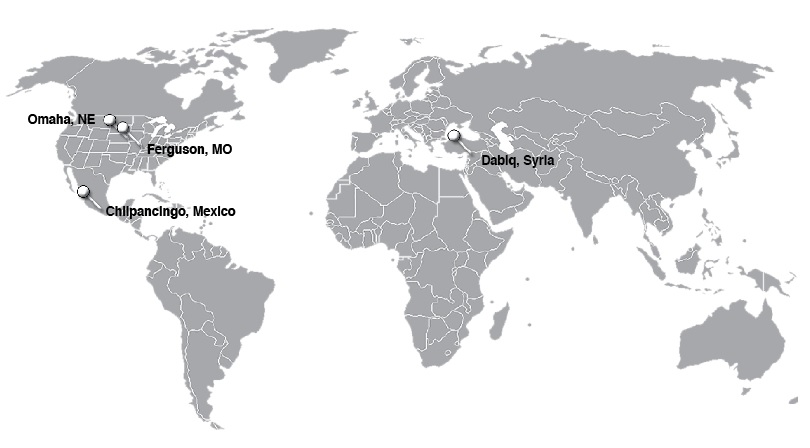 Dabiq, Syria
The extremist jihadist group known as ISIS, also known as IS or ISIL, has beheaded yet another humanitarian aid worker in the latest video intended to send a message to western nations. US Army veteran and aid worker Peter Kassig, who changed his name to Abdul-Rahman after converting to Islam, was shown deceased in a very graphic video along with a score of Syrian soldiers who met the same fate. The White House confirmed Kassig’s death, and President Obama remarked that this group of beheadings was “an act of pure evil.”

Chilpancingo, Mexico
Protests have erupted in the Mexican state of Guerrero after 43 students went missing at the hands of police and gunmen in September; they were on their way to raise money to participate in a march that commemorates the Tlatelolco massacre in which student protestors were shot by government security forces. Parents and classmates have taken to the streets to march and even vandalize buildings, calling for answers about where the missing Raul Isidro Burgos Normal Rural School students have gone and for more to be done by local and national authorities. A mass grave was discovered earlier and was thought to contain the bodies of the missing students but DNA tests prove otherwise.

Ferguson, Missouri
Missouri governor Jay Nixon has activated the state’s National Guard in anticipation of possible riots to follow the announcement of whether or not Officer Darren Wilson should be charged in the death of 18 year old Michael Brown. Brown was shot by Wilson in August when an altercation ensued between the two in the majority-black town. Witnesses claim that Brown held his hands up in surrender before he was shot, a fact that Wilson refutes directly. The grand jury is expected to reach a decision before the end of the month.

Omaha, Nebraska
Surgeon Martin Salia, a native of Sierra Leone, died as a result of Ebola in contracted while working in his home country to stem the outbreak. A resident of Maryland, Salia originally tested negative for Ebola while in Sierra Leone yet when his symptoms returned a week later he was once more tested and found to be infected. He was flown to Omaha for treatment while in critical condition; the biocontainment unit at Nebraska Medical Center was unable to save him. His death marks the second in the United States.