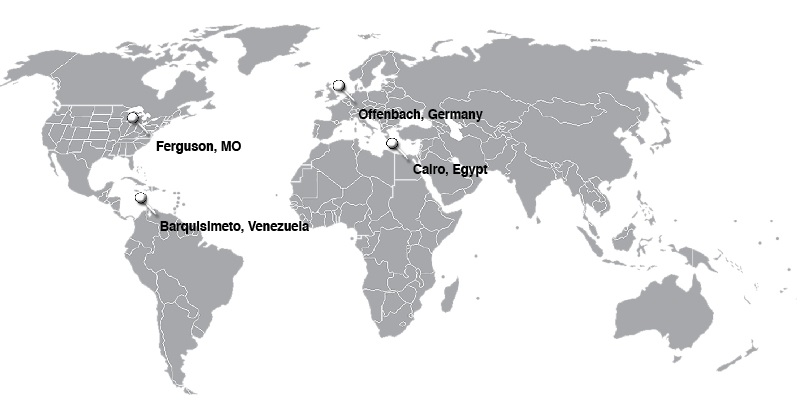 Ferguson, Missouri
A grand jury has reached the decision to not indict former Officer Darren Wilson, the police officer responsible for the death of 18-year-old Michael Brown in August. The decision means that Wilson will not be tried on murder charges. The announcement of the decision was met with protests and destructive riots in the city of Ferguson, resulting in damage to both public and private property to include police cruisers and local businesses. Wilson announced his resignation from the police force shortly after the decision was given and shared with ABC News that his “conscious is clear.”

Cairo, Egypt
Waves of protests swept the nation as former president Hosni Mubarak was cleared of all murder charges dating back to the uprising that took place three years ago. At least 2000 protesters took to Cairo’s Tahrir Square, only to be fired upon with teargas and dispersed by Egyptian police. At least one person died in the protests. The former president is currently serving a three-year sentence for embezzlement of public funds. An estimated 800 people died during the protests in early 2011 up until Mubarak resigned on February 11 of that year.

Barquisimeto, Venezuela
A total of 35 prisoners have died after overdosing when they stormed an infirmary and began rapidly consuming available medications in Uribana prison in north-west Venezuela. The inmates consumed a mixture of anti-seizure medications, insulin, antibiotics, and hypertension treatments. Relatives of the deceased accused prison wardens of poisoning the prisoners. Most prisons in Venezuela are controlled by armed inmates, leaving security forces with little to no control over the facilities. The country also has one of the highest murder and crime rates in Latin America, and their judicial system is struggling to handle the ever-increasing volume of inmates.

Offenbach, Germany
A young woman by the name of Tugce Albayrak has died after being attacked for defending two girls who were being harassed. Albayrak was at a fast food restaurant in a town outside of Frankfurt when she heard cries coming from the bathrooms.
One of the men, an 18-year-old named only as Senal M followed her outside and proceeded to beat her. He is currently in police custody. Albayrak was taken off of life support on her 23rd birthday after her injuries put her in a coma and rendered her brain-dead. A petition is gathering signatures to posthumously award her the national order for merit.