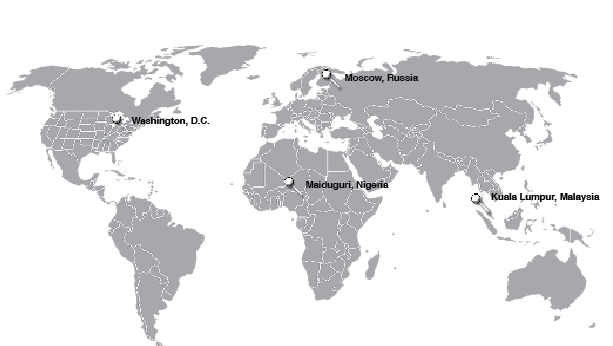 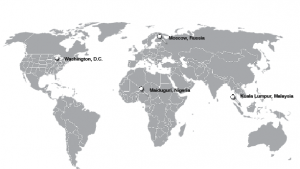 Maiduguri, Nigeria
The Nigerian extremist group Boko Haram has pledged allegiance to the Islamic State following an attack by female suicide bombers in the town of Maiduguri. In a video reportedly released by their leader Abubakar Shekau, the group promised loyalty to Abu Bakr al-Baghdadi, leader of IS. The self-proclaimed caliph of the Muslim world has received similar messages of allegiance from jihadist groups in the Middle East and northern Africa. The message came after a group of females—believed to be acting on behalf of the group—set off bombs at the marketplace and at a bus station, killing 58 and wounding nearly 150.
Moscow, Russia
Two men have been charged with the death of Boris Nemtsov, an outspoken critic of the Russian President, Vladimir Putin. The two, Zaur Dadayev and Anzor Gubashev, are Chechen by origin and are accused of planning and carrying out the execution of the former deputy prime minister and veteran liberal politician. Three other men were taken into custody in connection to the crime. A sixth man, before taking his own life, attempted to kill the arresting officers who came for him by detonating grenades in the Chechen capital of Grozny.
Kuala Lumpur, Malaysia
Family members of those lost on Malaysia Airlines flight MH370 gathered at a mall in Kuala Lumpur to mark one year since the plane vanished mysteriously mid-flight. Coinciding with the remembrance was the release of a report by the team of investigators, coming from 19 countries, assigned to the case. The nearly 600 page report, while not saying anything major that was not already known, let it be known that the battery that powered the flight data-recorder had expired in December 2012—more than a year before the plane went—down and that no records existed to suggest it had been replaced.
Washington, D.C.
Israeli Prime Minister Benjamin Netanyahu addressed the American congress on March 3 to discuss the possible nuclear arms deal to be made between the United States and Iran. Speaker of the House John Boehner drew heavy criticism after inviting the Prime Minister to speak without informing the President. Netanyahu spoke of the dangers of the United States making a deal with Iran, saying the proposal was not firm enough, the new Iranian government could not be trusted, and that an Iran armed with nuclear weapons would mean the end for Israel. President Obama retorted, saying that the Prime Minister “offered no viable alternatives” to the current negotiations.