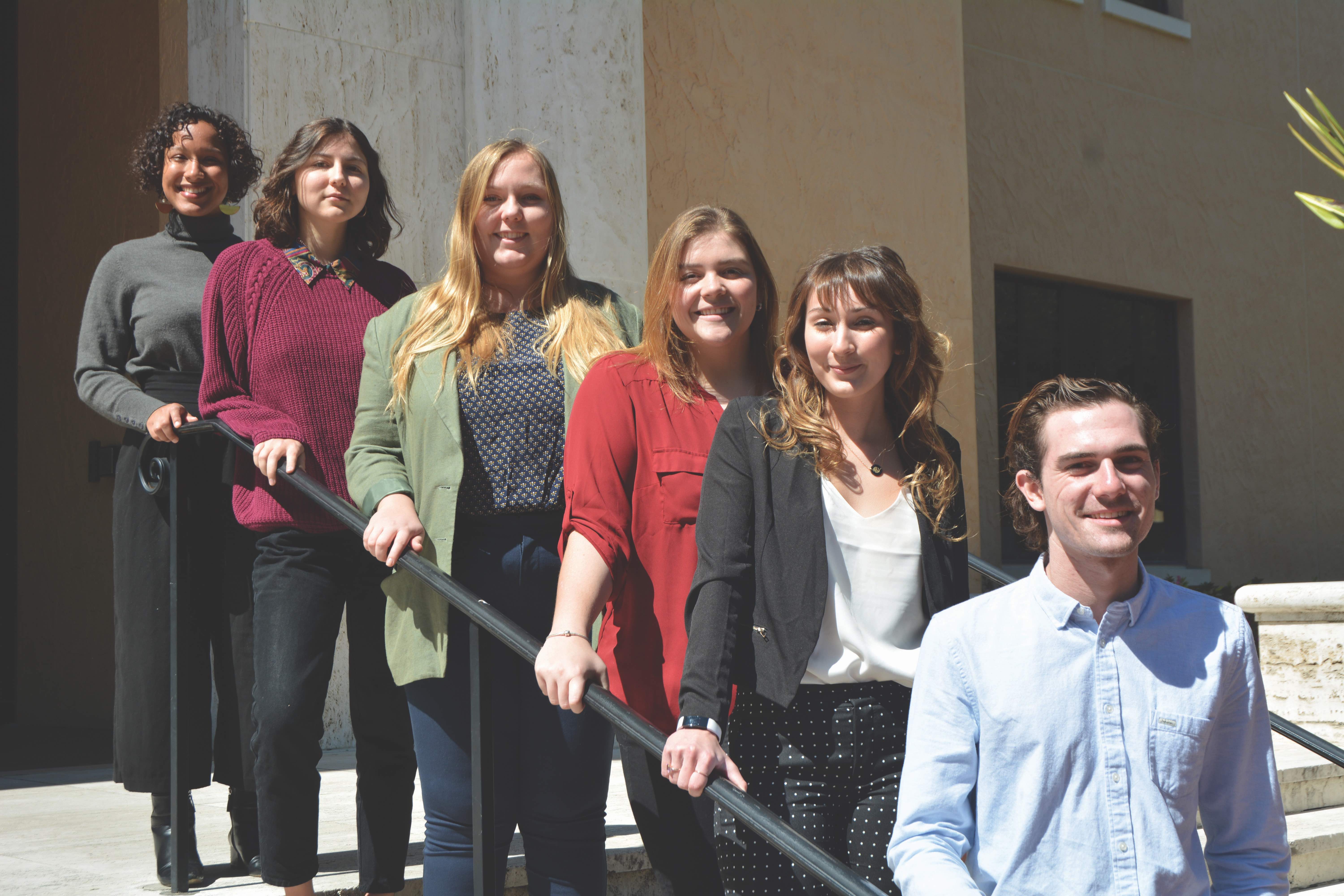 6 scholars named valedictorians for Class of 2020

by Heather Borochaner and Clara Ivanoff

Six valedictorians were selected in the Rollins graduating class of 2020. With a hard-earned GPA of 4.0 over four years of classes, the valedictorians told The Sandspur about their favorite experiences on campus and gave advice to lowerclassmen.

Mallory Bliss (‘20) is from Avalon, New Jersey, and is a biochemistry and molecular biology double major. She said she has cherished all four years she has been at Rollins.

“Rollins was the best decision for me,” she said. “I have been offered countless opportunities both inside and outside of the classroom, created lifelong friendships, worked alongside supportive professors and mentors, and, most importantly, found my voice.”

Bliss said that, although she experienced many sleepless nights and shed many tears, it was worth it.

“I would not change my Rollins experience for the world,” Bliss said.

Bliss was a member of the American Medical Student Association all four years she attended Rollins. In her junior year, she was elected president. She was also involved in Alpha Omicron Pi.

“The women of this organization are truly inspiring, with their strong work ethic and high arching ambitions,” Bliss said. “I am proud to call them my sisters.”

She has held several leadership positions within the sorority such as secretary and executive recruitment chair.

She was also co-president of the Rollins Omicron Delta Kappa National Honor Society Circle. Furthermore, she was a lead tutor at TJ’s Writing and Tutoring Center in the Olin Library.

“My favorite part of tutoring was watching my peers progress and succeed academically,” she said. “I could see an emotional change in their confidence and independence. When a peer comes to an appointment to excitedly show me their improvement on a lab report or their boosted exam grade, I cannot help but smile and share in their giddiness. Their enthusiasm is infectious.”

After graduation, Bliss plans to attend either medical or graduate school. She was accepted to a Master’s program in genomic medicine at King’s College in London.

“I am waiting to hear back from several other graduate schools before making my final decision,” she said.

Kenzie Helmick (‘20) is a Florida native and double major in public policy and philosophy and double minor in Spanish and Sexuality, Women’s, and Gender studies (SWAG). She said that hearing the news of being a valedictorian was “a mixed bag.”

“I have explicit memories of when I came to Rollins; I made this pact with myself where I would work as hard as I could so I knew I could get into whatever graduate school or job I wanted,” Helmick said.

She added that she later realized those goals were not as important as other personal pursuits, but she still managed to keep her grades up.

“I was proud that I achieved that initial goal, but I don’t view it as important anymore, and more that it’s something that happened to me,” Helmick said.

She explained that the change was more recent and strongest in her last semester as she started reflecting.

“I had this shift of academic achievement versus learning; I was sacrificing curiosity and free-flowing learning for that achievement, and now I’m prioritizing it a lot more.”

Helmick gained a deeper sense of community and started prioritizing her friends and relationships, “which is something I typically set aside to get my school work done. But in the real world, those things are the most important.”

After graduating, Helmick has a few different paths in front of her, but she is still deciding which to take. She is currently a semi-finalist for Fulbright research in India.

“If that ends up not working out, I’m looking at doing English teaching programs in Chile or Spain,” she said.

Helmick’s advice to other students is to not care about having a 4.0 GPA.

“It came at the sacrifice of a lot of personal time, time with friends, and it’s not going to mean anything as soon as I graduate,” she said.

Silvana Montañola (‘20), English and anthropology double major, said that as an international student from Honduras, her teachers, and her sorority, Alpha Omicron Pi, helped her feel at home.

“I found my sisters and the people I consider my family outside of my own family at home, and I also found my passion for service. I think that is what defines my Rollins experience,” said Montañola.

Montañola added that passion is the most important element to excelling in academics.

“If you go to the classes where you want to be, then you will be inherently motivated to work for those classes. When I read my anthropology papers, it doesn’t feel like work to me. I feel like I’m so engaged that I can spend hours and hours doing it, and it doesn’t feel like a job,” she said.

The way for Montañola and her friend, Josh Willard, to make fun of the hard task of keeping a 4.0 GPA is with a little joke: “The formula to the madness of keeping up with the GPA is madness,” said Montañola.

Some of Montañola’s best memories were created through the Rollins Immersion Program, which engages students with diverse communities.

“I have led two Immersions. One of them [was] in Chicago for an alternative spring break, and we were looking at women’s issues … I loved every single moment,” she said.

Montañola has applied for graduate programs across the U.S., but she said that she is has made her decision.

“I was accepted to a couple of Ph.D. programs for anthropology, but I just committed to the University of Maryland. After that, I can see myself teaching because I love the college environment, but I also see myself working non-profit and helping those individuals at the local community level,” Montañola said.

Josephine Spiegelberg (‘20), a local of Winter Park and a physics major and political science minor, said she was “really caught off guard” by being selected as a valedictorian.

“I wasn’t expecting it at all,” she said. “At the same time, I was really excited and proud.”

Spiegelberg said she wanted to come to Rollins due to the emphasis on student-faculty collaboration.

Spiegelberg has been able to “make close connections not only with other students but with faculty as well, and I’m really gonna miss it when I leave,” she said. “Of course, the beautiful campus didn’t hurt either.”

Spiegelberg feels that she was able to take advantage of a lot of Rollins’ resources and opportunities, from research to study abroad to singing in the Bach Festival Society Choir.

Spiegelberg said her favorite memory at Rollins was attending her first conference after the summer of her sophomore year. There, she experienced the collaborative spirit of the scientific community firsthand.

“Or maybe just the late night conversations with my roommates where we couldn’t stop laughing about nothing at all,” she said.

Spiegelberg is not sure how she achieved her 4.0 GPA, the requirement needed to be valedictorian.

“It wasn’t easy, and there were a lot of long nights and stressed-out calls home to rant,” she said. “For others, I guess I would say to choose classes that you care about and are willing to put the effort into to get an A.”

She also advised students to take advantage of the great resources Rollins offers, including talking to professors and going to the tutoring center.

“There are lots of people willing to help if you reach out,” she said.

After graduation, Spiegelberg plans to attend graduate school and pursue a Ph.D. in experimental physics.

Morgan Snoap (‘20) is an art history major and Middle Eastern and an African studies and  SWAG double minor. Snoap said that she was surprised to learn she was one of the valedictorians.

“I actually feel weird about it … I’m glad to be in the group with the other six valedictorians, and I am glad that we get to share the spotlight,” said Snoap.

Snoap’s aspirations are to get into a doctoral program in African art history with a focus in North-African textiles.

“I applied to different doctoral programs, and I have been nominated for a fellowship at Boston University … I’m excited to go and visit,” Snoap said.

Snoap was born and raised in Oviedo.

“Rollins was a school that I always considered … I grew up 30 minutes down the road from Rollins.” Since high school, she knew she wanted to study art history.

“When I was a kid I liked different things; I wanted to be an artist …  I did not care what medium it was, but I just wanted to do art in any way and go to the museum and read art books … When I learned about Art History as a career, I decided to come to college as an art history major,” said Snoap.

Looking back at her time at Rollins, Snoap remembered one of her first freshman classes and her long-since friends.

“I have had my same friend group throughout these four years … we had the Rollins Conference Course (RCC) system at the College of Liberal Arts (CLA) school where freshmen are put into this one class together, and ours was the Decoding Sherlock Holmes program … and also we all lived on the same floor of Ward Hall,” Snoap said.

Snoap said that her daily schedule is constantly busy, but she also likes to relax after working hard and engage in different activities that are rewarding.

“I thrive on being busy, but sometimes it is a lot … so I work at the museum tours, and I also work as a writing consultant in the writing center and do other fun little jobs on the side … I get time for myself and enjoy watching movies and spending time with my friends,” Snoap said.

Josh Willard (‘20), an International Relations major and Spanish minor, said that moving from Sarasota to go to Rollins helped him find his anchor and passion.

“I fell in love with the campus on my very first tour. I remember turning to my dad and saying, ‘Why are we searching at other places? I feel a spark here; this is where I belong,’” he said.

After changing majors and considering different paths, Willard finally found his passion for International Affairs by the end of his sophomore year.

“After reflecting on it, I thought that I really liked my intro class to international relations, and I went back to that and talked to my advisor, and then I fell in love with the major,” said Willard.

After graduation, Willard is planning on attending graduate school and working in the State Department or at Non-Governmental Organizations.

“I’m applying for graduate school, and I am continuing my studies on international relations. I have an undergraduate degree, and I want to take it to the graduate level and get a degree in international affairs,” he said.

Looking back at his time at Rollins, Willard said that he was happy to immerse himself with people from all over the world and gain a round-up perspective.

“Being able to find a community here and finding your anchor is more than a slogan, and I certainly found mine both socially and academically,” he said.

One of his favorite memories was traveling to Cuba for a field study project.

“It was completely eye-opening to go to a place that is so close by but so misunderstood … The faculty leaders, our guides, and everything about the trip was amazing,” Willard said.