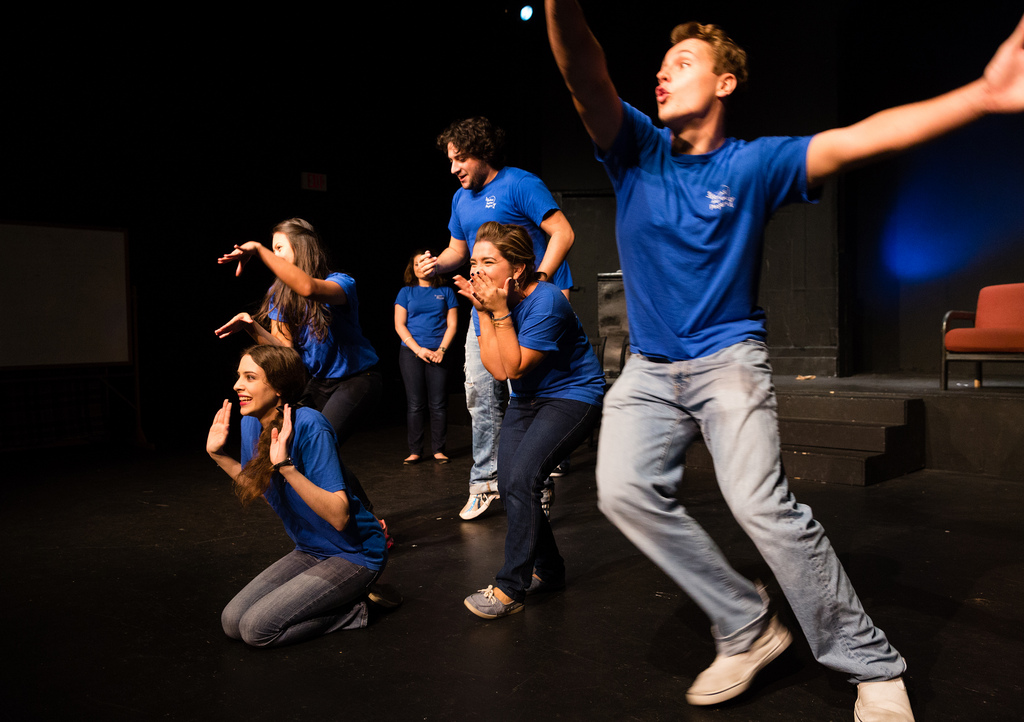 Rollins Improv Players, or RIP, serves as the resident theatrical improv troupe for Rollins College. You probably remember RIP from your first-year orientation programming, but their contributions to the campus continue year long as they perform a variety of both long- and short-form shows for Rollins’ audiences.

Three signature forms have been developed over the years and act as the company’s staple improv fare. Variations on a Theme is a long-form show with the signature phrase, “that reminds me of the time,” starting the improvisers on a journey which weaves audience suggestions and a theme word into the show, while maintaining a unity of character to provide a unique emotional journey. Cut To… is also a long-form show and has a “star” and “co-star” randomly selected, as well as six suggestions from the audience used to create the identities of the supporting cast. The improvisers craft a story with jumps forwards and backwards in time, using the language of film in the show’s signature phrase “cut to.” Theimprovisers maintain the same character throughout the show which serves to create a show that is both outrageously funny and strikingly tender. The short-form show, RIP Tag, has teams of improvisers competing for points from randomly assigned audience judges as they attempt to win the trophy called, “The Show.” Teams act in and are judged on a series of scenes, each of which is framed as a game in the tradition of Whose Line Is It Anyway? and SAK Comedy Lab’s Duel of Fools.

This year, RIP is celebrating their 10th year of spontaneous fun! RIP was founded in 2004 by Dr. David Charles, who continues to serve as its Artistic Director. Since its inception, RIP has constantly grown. In the first few years of RIP’s existence, the improvisers occasionally outnumbered those gathered in the audience! Now, RIP shows often fill the Fred Stone Theatre and house managers may even need to turn people away at the door. In 2005 they began performing for all first-years during their orientation, in what RIP calls ImprOvientation. In 2007, they began the tradition of RIP Tag All-Play Invitational, where anyone from the Rollins Community can star in their own RIP show. 2008 was the first year to see the now standard 16 student troupe, and in 2009 the student positions of Assistant and Associate Artistic Director were created to aid Dr. Charles. Currently, RIP performs over thirty shows on campus for students each year. Last year over 2500 people attended RIP performances and events—a far cry from the handful of attendees during the debut season of 2004.

Every day they work to fulfill their mission statement: “To create improvisational theatre that expresses challenging and provocative subject matter; to represent the dramatic and comedic aspects of student life and beyond; to dare ourselves and our audiences to grow, think and act; to serve Rollins College as a conduit for discussion and discovery, experimentation, play, laughter and community.”

Two years ago, Rollins alum Brian Hatch ’12 brought improvisation to the Winter Park Towers retirement facility for his senior thesis, which was the creation of a plan to engage Alzheimer’s patients through the use of improvisational skills. Last year, alum Alexis Riley ’13 used improv to explore bipolar disorder in a performance-based honors thesis. Earlier this semester, I even developed a program that uses role playing to train medical professionals in the art of empathetic communication. A group of improvisers then traveled to Adventist Health System to employ the program with occupational therapy students. All of these were aided by RIP and greatly guided by Dr. David Charles.

RIP works with many student organizations, charities, and campus offices to provide free shows and workshops, and collaborates with organizations through show sponsorships. Shows and workshops are provided both on and off campus, with workshops lead by the RIP students that teach a variety of life skills, including trust, teamwork, communication, leadership, and courage. They are currently preparing for their 10 Year Anniversary Festival, which is on April 20. This is going to be a night of improv, performed by both the current troupe and also RIP Alums.

Alums will be making their way back to campus to perform a show aptly called Family Reunion at 8 p.m. and then members of the current troupe will improvise an Armando Diaz at 9 p.m. This free 10 Year Anniversary Fest will feature two great forms of improv and it is a fantastic way to connect with your favorite RIPsters from the past 10 years! Definitely not an event to miss.

Also, for more improv, do not forget to check out The Lost Comedies of William Shakespeare, a fully improvised, long-form Shakespearian play, in the Annie Russell Theater starting on April 18. Students can receive a free ticket one hour prior to the show with their current Rollins i.d., while faculty and staff can receive a pair of free tickets by contacting the Box Office at AnnieBoxOffice@Rollins.edu.

RIP performs throughout the semester in the Fred Stone Theater, located by the Alfond Sports center. If you are interested in learning more and receiving updates about upcoming shows, classes or auditions, you can find RIP on facebook on the group Rollins Improv Players… the everyone version. Or reach out by emailing improv@rollins.edu.

Their shows are always fun and free, and a great way to spend an hour laughing with friends. Hope to see you there!