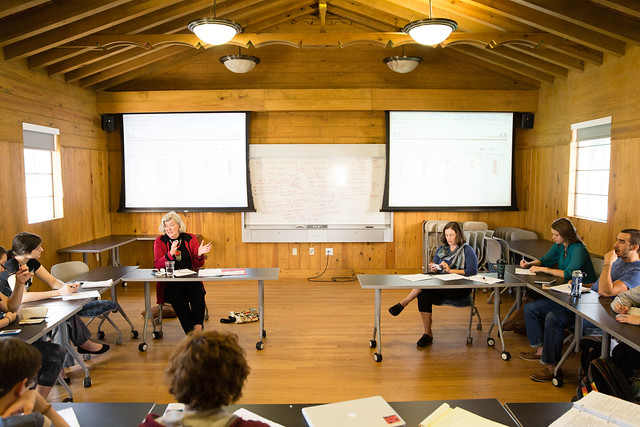 During the recent debate between the Rollins Democrats and Rollins Republicans clubs, students discussed the issues of gun control and immigration, using the moderated environment to promote respectful conversation in a fiery political climate.

No winners were announced during the debate, which took place in the Bieberbach Room on Monday, April 8, but students in attendance appreciated the opportunity to learn from their peers’ points of view.

“Listening to the different parties take on hard-hitting questions in a respectful environment encourages others to know that even during a critical time in politics, rather than stir argument, it is important to understand both sides and come to a compromise on issues,” said Camila Araujo (‘20), who attended the debate.

Chelsea Ebin, visiting assistant professor of political science, moderated the debate between the Rollins Democrats, represented by Meghan Oxford (‘20) and Sydney Brown (‘21), and the Rollins Republicans, represented by Joshua Bedoya (‘21) and Fia Frasz (‘22). In each debate, both sides presented a three-minute case and a one-minute rebuttal.

As expected, Oxford, founder and president of the Rollins Democrats, argued for gun control while Bedoya argued against it. Both debaters faced three questions: if gun control is legal under the Second Amendment, if gun control has the possibility to reduce mass killings and violence, and if schools should be gun-free zones.

An official winner was not announced because the groups wanted to make the event more of a discussion than a debate, according to Oxford and Bedoya.

Oxford’s argument heavily relied on the costs and effects of school shootings and gun violence, pulling from past Supreme Court decisions. In contrast, Bedoya’s case focused on the wording of the Second Amendment, mental illness’ role in mass shootings, and why teachers should be armed in schools.

Throughout her argument, Frasz explained the importance of background checks in determining whether or not immigrants are inclined towards violence and self-segregation. Brown then led a case for the value of diversity and the ability to aid these immigrants through federal and state-funded services.

On the whole, the debate participants appreciated the event even without an official winner. “Many conservative-libertarian students are afraid to discuss important issues with left-leaning students and professors because they feel like their ideas are not always respected on college campuses,” said Frasz.

Frasz hopes for similar debates in the future “to model open dialogue and free expression in an increasingly intolerant, close-minded intellectual climate.”

Oxford and Bedoya also appreciated the debate due to its encouragement of student involvement in politics, regardless of party.

The Rollins Democrats were recently honored with an award from its national headquarters. The group was named the New Chapter of the Year through the Florida College Democrats, a branch of the Democratic National Committee.

Oxford stated the importance of students forming their own political opinions, while Bedoya said, “This debate was to help encourage students to get involved with politics both externally, outside on campaigns, and internally, on campus.”