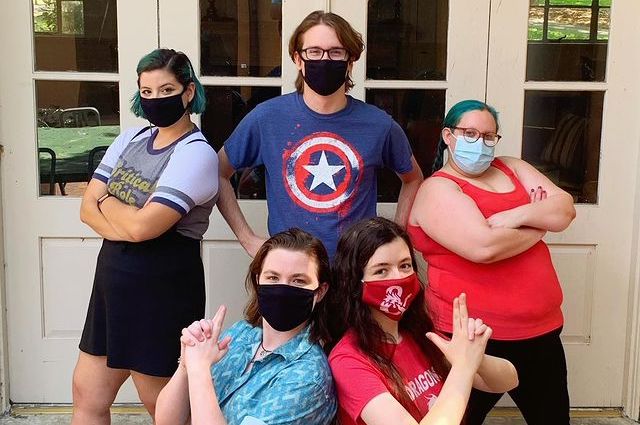 This spooky season, the Rollins Dungeons & Dragons Guild will host a variety of single-session scary story campaigns accessible to all students on Oct. 29 at 4 pm.

The club was created in Fall 2019 by past student and games master Weston Ledlow. Evan Munger (‘22), current president, said that it was Ledlow who lifted the club off the ground, and new members build upon it every year.

Due to the pandemic, the club moved to a fully digital platform, and executive members have implemented a hybrid model this year.

Munger became the president, or “Guild Master,” through an annual election. When he was first initiated, he kept track of all game assets and materials through his position as the “Keeper.”

Charlotte Kelly (‘22) was the previous Guild Master and currently holds the title of vice president. Munger said he is grateful to Kelly for showing him the ropes of his current position.

During the most recent election, both Munger and Kelly tied for the rank of Guild Master. When their vice president resigned, Kelly yielded to fill the void, and Munger assumed the presidency.

Currently, the club boasts an approximate membership of 80 students. Turnout averages between 20 to 30 members per session.

Munger said that the club “strives to be a resource instead of a ‘you have to be here’ club. We’re all really about introducing as many people as possible.” He said that the club exists for all player demographics, without the pressure of the time-consuming commitment that Dungeons & Dragons tends to be known for.

Munger said the Halloween sessions will be dynamic, and it is already attracting the attention of many students across campus. During the event, volunteer Dungeon Masters will be given the floor to run Halloween-themed story campaigns. Students can get involved by signing up to be players or spectators.

One of the executive members’ goals is to partner campaigns with charity events. Last Valentine’s day, for example, the club promoted March For Our Lives in support of gun control legislation.

The club raised over $500 dollars in a single campaign event and, following this success, Munger said the club is striving to continue partnering with more charities in the future.

At this time, it is unknown if the club will partner with a charity for the upcoming Halloween event.

The Dungeons & Dragons Club holds events and sessions every Friday afternoon at Kathleen W. Rollins Hall. To connect with the club, contact Evan Munger via the club’s email to be admitted to the Discord server.