Lady Tars Come Out On Top

The Rollins women’s soccer team played against Florida Southern on Wednesday, Oct. 5. Rollins came out on top with a 2-0 win. The Tars scored very early in the game with a goal from Paxton Sickler ‘17, and it did not stop there. 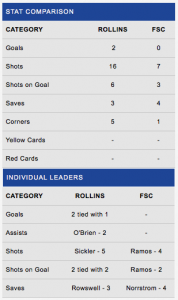 The Tars kept up their fast tempo and kept putting pressure on Florida Southern. They followed up with a second goal in the 26th minute when Emma Bloom ‘17 followed up on a rebound from Kathryn O’Brien’s ‘19 shot to make it 2-0. Kathryn O’Brien assisted on both goals.

Florida Southern came out with a sense of urgency during the second half, but it was not enough to bring them back into the game. Rollins outshot the Mocs 16-7. The Rollins defense held strong and finished off with a shutout, making it the fourth shutout of the season.

The match against Florida Southern was not the only way the Rollin’s women’s soccer team came out on top. The Tars also made a jump in the NSCAA National Poll, jumping to number eight. They are currently sitting at the top of the Sunshine State conference as well. They have remained undefeated. A spotlight has been gleamed on Paxton Sickler, one of the captains, who is now tied for the 3rd spot with Lindsay Giblin ‘08 for all-time goals scored.

Rollins was supposed to play Barry University on Saturday, Oct. 8, but due to Hurricane Matthew it has been rescheduled for Saturday, Oct.29 at 6 p.m. in Miami Shores. If you have not already, come and support the Tars as they take on Palm Beach Atlantic on Wednesday, Oct. 26, at 7 p.m. here at Barker Family Stadium. It will coincide with Senior Night; it will also be their last home game of the season.