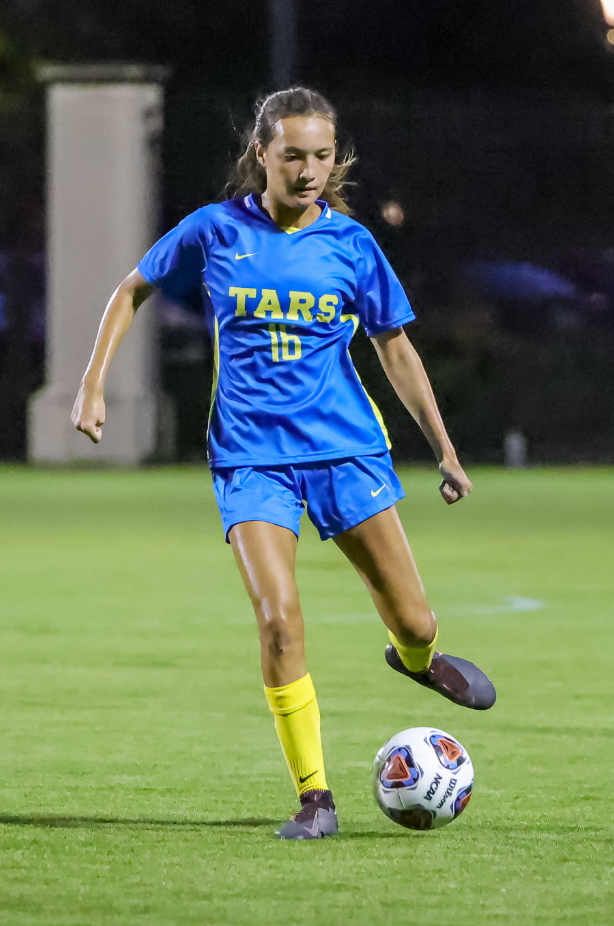 Women’s Soccer narrowly loses to No. 1 team in the country

It was close, but it was not meant to be. The lady soccer Tars fell 1-2 in overtime against Flagler, the No. 1-ranked soccer team in the nation, in an exciting soccer afternoon in Winter Park. Despite the opponent’s resume, Rollins held its own throughout the game.

Head Coach Alicia Schuck, entering her 11th year at the helm for the Tars, said, “It gives us great experience to be playing some of the top players and top teams in the country. These games are valuable, and the reason why we schedule them is that if you win them, you feel on top of the world, and if you don’t, we’ll just keep notching away at things.”

This is the second narrow defeat that Rollins has suffered at the hands of ranked opposition; No. 2 Mississippi State won by the same scoreline in a highly contested match a week prior.

The first half of the match saw Rollins with more possession, but Flagler with the better chances. The guests drew first blood after a series of clumsy tackles failed to clear away the danger from the box. The Tars squandered a pair of good chances before both teams headed into halftime with Flagler up 1-0.

The reinvigorated Tars pushed harder after the break, and their efforts were rewarded in the 55th minute as Kayla Park (‘25) headed a Bailey Tran (‘23) corner into the far post.

“It was an insane moment, I didn’t even watch the ball go in cause it hit off of my ear. I looked back, I saw the net and I went crazy. It’s surreal. I couldn’t imagine a better first collegiate goal,” said Park.

The Lisbon, Conn. native immediately turned and waved at the camera. By the time the game was over, her phone was buzzing with texts and videos of the goal from friends and family back home, while her mother watched from the stands of the Barker Family Stadium.

Overtime saw both teams go for the golden goal without hesitation. Flagler found it after the referee’s questionable decision to overlook an offside position.

Schuck said she is proud of her players, particularly Park: “She should be super proud of herself. It’s hard to score goals generally speaking, but especially against the No. 1 team in the country. I’m sure she’s probably disappointed we didn’t win, but it’s nice to be able to crack a smile in situations like that.”

Park’s smile stemmed from her teammates, especially the ones on the sidelines.

“Our bench, they’re an important factor. They’re just loud, and that really pumps you up,” Park said. “You make a good play, they scream for you and you just want to keep going and keep the adrenaline rushing. Even on a bad play, we still have each other’s backs.”

A 1-3 start to the season is not what the Tars are used to, but this team is young and still figuring out how to fulfill its potential. Park herself is the best example. During pre-season, the freshman started at right wing-back, then moved up top to forward, before settling at center midfield.

While players are figuring out how to synergize, Coach Schuck is taking care of both tactical adaptability and locker room culture at the same time.

Due to COVID-19, many new players, old players, and transfers have not seen much playing time yet. Park does not let it distract from her goals.

“With COVID, it’s just uncertainty. Players are in and out, people get sick or hurt, you do whatever you have to do, and that’s what I want to do: just help my team win,” said Park.

The greatest challenge the pandemic has posed is by far recruitment. Most of Park’s cohort were recruited off of Zoom. In normal years, Schuck and her staff would watch someone play four or five times before they committed, but this year they didn’t get to meet some of the players until they came to campus.

Every day that goes by, the coaches are gaining more and more insight on what the new recruits can and cannot do. With that being said, the Tars are still in good hands.

”We recruit to make sure our program keeps getting better and better. This is a special group of freshmen and new players,” Schuck said.

Park described the relationship between starters and other team members as symbiotic. They both push each other to get better. When games like the one against Flagler come along, the performance comes as no surprise.

Park said, “It was hard, but we’ve been working extra in practice to make it to this overtime; we’ve been doing the sprints, we’ve been putting the work in. It’s something special here; I’ve never experienced something quite like this.”

Despite the hurdles, Schuck still aims for nationals like every other year, setting a high standard for the program.

Rollins is still reigning conference champions from Fall 2019, and Schuck sees it as the Tars’ duty to defend the crown, despite their current losing record during the makeshift spring season and the slow start to the current one.

“That’s always been what it’s about and we’ll always try our hardest to win a championship here at Rollins and get to the NCAAs,” Schuck said.

Last time the Tars had a losing record, they went on to do just that in the following year. They will be working extra hard to make sure history repeats itself this time around.